Now, with political tensions rising in Europe which is putting upward pressure on bond yields across the heavily-indebted south, the risk of a run on the dollar rises daily. And while the European Central Bank looks to have everything under control in the short-term it looks to me like the calm before the storm.

In this article I’m going to go around the world quickly to end in China because I believe it’s important to separate hyperbole and, frankly, political necessity from China’s plans for its currency, the yuan (CYB) likely course of action.

In fact, the beginnings of China’s plans are already in place and working well.

But let’s start in Europe, because that’s where the source of any true dollar bullishness will come from.

With new governments in Italy and Spain, especially Italy, the status quo in Brussels is facing its stiffest challenge ever. Brexit was always going to be betrayed by the political class in the U.K. Greece’s Syriza never had the coalition strength nor the leverage that Italy has.

So, it is only a matter of time before Italy’s fiscal situation takes center stage. Italy’s leadership understands the fundamental problem of the European Union. The euro is badly designed and that bad design benefits a handful of countries, mostly Germany, at the expense of the rest of the union.

Absent structural reform which there is no political will to implement the European Union is headed for a complete political and economic meltdown. ECB President Mario Draghi surprised markets recently with his hawkish tone to wind down his QE program(s) but it’s a bluff.

It’s a bluff that the markets have not fully tested yet, though we’re beginning to see it occur. Volatility of Italian bonds, of which the ECB is the marginal, if not only, buyer, has skyrocketed since Lega and Five Star Movement settled on a coalition plan last month.

Italian credit is getting much more expensive to insure with CDS rates, now 270 basis points, up from a low of 27 bps in May. We have not seen a similar move yet in Spanish CDS spreads. 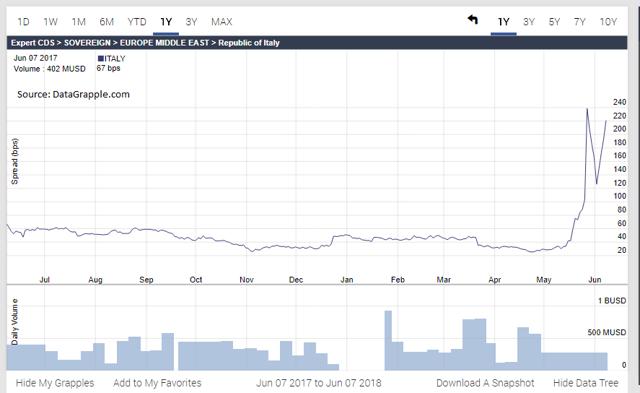 So far, the markets believe the risk is purely an Italian phenomenon, but that is a very dangerous bet. They are betting that the leadership in Brussels holds all of the cards in fiscal and debt negotiations, expecting a game of hard ball similar to what was done to Greece in 2015.

The Italians, for their part, are keeping things cool as well, saying they have no current plans to leave the euro. This has helped the euro stay above water and support at $1.155.

But, at the same time, we know what their leadership is thinking. New Prime Minister Guiseppe Conte immediately came out swinging saying that Germany, not Italy, should leave the euro-zone since it is the one benefitting from the current arrangement at everyone else’s expense.

Eventually, that showdown and the ECB’s inability to materially end support of Italian debt which will force investors to face the reality that the status quo is not sustainable. The euro will have to fall significantly from here as default risks will put upward pressure on the U.S. dollar.

For now, the euro is benefiting from a safe-haven trade from rising sovereign and corporate bond risks.

And the leadership in Brussels, already stung by President Trump’s behavior at the G-7 and his imposition of tariffs, will respond in kind next month, further curtailing global trade especially if European companies wind down their trade with Iran and sanctions on Russia stay in place.

All of this is pushing the dollar up off its lows. And it will continue doing so because these events are not isolated. They are the result of long-standing policies which cannot and will not change overnight.

Populism in the West is a trend that has been building for a decade since the last financial crisis. The costs of bailing out the banks at the expense of the people in Europe and the U.S. is this period of political backlash we’re experiencing now.

Like it or loathe it, it is reality. And the markets have not begun to balance the scales after a decade’s worth of monetary experiments by the world’s major central banks.

How does China fit into all of this? China’s debt problem is big, but it is mostly a yuan-denominated one. Yes, there are more than$90 billion in dollar-denominated loans maturing in the next 12 months in China. It sounds like a lot but for the PBoC it really isn’t. Not with $3 trillion in foreign exchange reserves and the ability to swap that debt into yuan.

The most vulnerable Chinese corporate debt isn’t denominated in dollars, unlike, say Turkey’s.

In fact, China can and will devalue the yuan and expand the People’s Bank of China’s (PBoC) balance sheet to keep the banking system liquefied and bail out whoever is structurally important to the banking system.

China needs a rapid expansion of its money supply if the Yuan is going to be any kind of regional trade settlement currency. And what better time to do that but when the U.S. is trying to blow up the status quo between itself and the European Union which is dependent on exports?

The latest SWIFT RMB Tracker has the Yuan at 6 th in the world settling just 1.7% of global trade. This is down from nearly 3% in 2015. This was by design to stop significant capital outflows.

But, with the launching of the yuan-denominated oil futures contract in Shanghai in March, China is looking to deepen its sovereign debt markets as profits are recycled back into bonds. Tying the contract settlement to gold (GLD) was simply a way to gain investor confidence that despite China’s partially-closed capital account, they would be able to get their money out of China.

And this is where things get interesting.

According to a recent article at Bloomberg the PBoC has made the following moves to open up yuan liquidity:

Starting full operation of a new phase of an international payment system, extending its running hours Making it easier for overseas lenders to borrow the yuan, to help facilitate foreign investments in onshore bonds and stocks Signaling the resumption of a program for mainland investors to buy offshore assets with the yuan that’s been on ice since 2015

So, while China allowed the yuan to strengthen while the dollar went down last year, the trend has reversed. And I believe it is something that keeps no one at the PBoC up at night.

The PBoC is not being caught flat-footed here. This isn’t a simple dollar strong/yuan weak trade. They know they have structural problems.

What I’m arguing is that China will allow the yuan to fall while it manages its REER – real effective exchange rate – such that its emerging market trading partners will be incentivized to settle more trade in yuan rather than dollars. This benefits them by building yuan reserves while selling dollar reserves into the market to help defend their currencies and, in effect, bail out their indebted companies with too much dollar-debt exposure.

Expect the gap between the REER of the U.S. dollar and the Yuan to close over the next couple of years. China allowed the yuan to stay strong against the dollar in 2017 because it was interested in attracting capital.

I’m handicapping a very strong dollar wave over the next few years thanks to financial and political instability in Europe creating a global scramble for dollars to service all of that debt. China can support that by allowing the yuan to fall naturally. And if Trump gets too far out of line with his trade demands, do not be surprised by another shock yuan devaluation like in 2015.

To me, thinking back on it, that wasn’t panic. That was a warning.

There is little to stop a strong dollar wave here. If you are long Chinese equities I believe it would be prudent to hedge that position with a short against the Yuan versus the dollar. I wouldn’t be thinking about a long on the Wisdom Tree Chinese Yuan ETF (CYB) until we are much further along this strong dollar path.

Moreover, as we move deeper into this unfolding political and debt crisis, there will be a shift into tangible assets. This is what has been buoying stock prices here and in Europe. And I would look at the current strength in the euro as unsustainable, making any move towards $1.20 optimal shorting territory.

Putting a short against the euro on via the ProShares Ultra Short Euro ETF (EUO) either directly or via an options straddle would be a good hedge against your equity exposure. The next six months will be pivotal so taking out an EUO straddle with a November expiration makes sense here.

For the Yuan, May was a two-bar reversal signal on the monthly chart putting the first target near ¥6.60 versus the dollar, with a longer-term target at the 2017 high of ¥6.965.

The big takeaway here is to see that China will not fight the trend, but rather use it to its advantage while the leadership in Europe will fight for a stronger euro to maintain its political control over countries who challenge its authority.

Tom Luongo
2.36K Followers
I am a former research chemist by trade and an Austrian Economist by study and a market analyst by choice. For the past four years I have been a Senior Financial Editor with Newsmax Media publishing my thoughts on where markets, central banks, gold and geopolitics meet and explode.  I am now the publisher of Gold, Goats n' Guns, a monthly newsletter offered through Patreon.  I have been an investor and market analyst for more seventeen years and am an astute observer in changes within the culture and the political landscape. Feel free to find me on: My personal blog, Giold Goats 'n Guns: www.tomluongo.meYou Tube: https://www.youtube.com/channel/UC54PyZuVrDrhbWc6UqNjEBALinkedin: http://www.linkedin.com/pub/tom-luongo/5/384/a59/ Twitter: @TFL1728 Patreon: www.patreon.com/goldgoatsngunsPeriscope: @tomluongo (Mondays at 8pm and Fridays @ 9pm EST)