In an earlier article, I said that if we know something about Bitcoin, then we might something about cryptocurrencies in general. Today I'd like to develop that idea further, and show that Bitcoin (BTC-USD), and to a lesser extent Ethereum (ETH-USD), might be the only two cryptocurrencies that matter right now (at least when it comes to evaluating the cryptocurrency market cap). Let's get started. 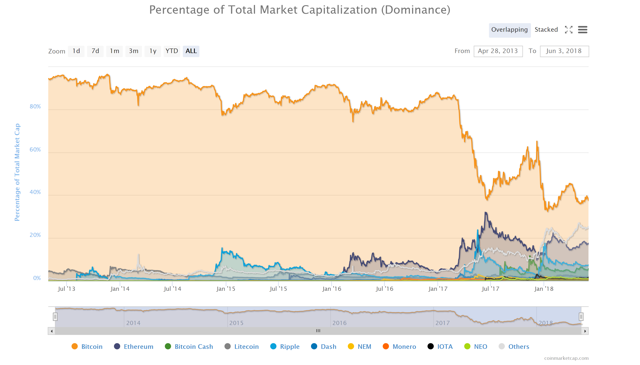 You may have noticed that BTC Dominance has fallen from 80% to below 40% in the last year. What's going on? What happened in March of 2017 that might have caused this change?

March of 2017 was the date that the blocks filled up. If you recall from my previous article, a block is the name for a group of Bitcoin transactions that were bunched together, validated, and connected to the blockchain. The more transactions happen in a ten minute period, the bigger a block becomes up to a certain limit. In March 2017, that limit was 1 Megabyte (and it still is but it's more complicated now because there's Segwit and Block Weight, we'll get into that a bit later).

A huge beef was raised on social media about what was going to happen when the number of daily transactions hit this limit (which was predictable) and what was the best way to react.

The most straightforward solution was to just increase the block size, which had already been done several times in the past without much trouble. However, this time something was different.

The block size debate went on for nearly two years, and turned social media into a demilitarized zone. Arguments and accusations flew, with each side claiming that the other was in the pockets of big money of one kind or another; primarily the large mining companies or Blockstream.

As a miner, I found it odd that people believed that bigger blocks would result in more fees for miners, since the larger blocks would also mean that people could enter a transaction with as little fee as they wanted and it would still get written into the blockchain. But, that was probably the least of the misinformation that was circulating. The block size debate probably deserves it's own article, or maybe it's own book, which is outside of our scope for now.

However, the blocks did eventually fill up, and when the average transaction fee started to increase as Bitcoin users had to start trying to outbid each other for block space, some started using cheaper options for their cryptocurrency transactions, such at Litecoin (LTC-USD), Ethereum (ETH-USD) and Dash (DASH-USD). This transition caused many altcoins to outperform Bitcoin in 2017. See the table below.

Ultimately, Bitcoin was split in two, but not evenly. One side forked the code and increased the block size, and the other side kept the block size limit but implemented segregated witness, or segwit. That was how we ended up with Bitcoin (BTC-USD) and Bitcoin Cash (BCH-USD) today.

When Bitcoin Cash forked off from Bitcoin (Bitcoin Cash believers sometimes call Bitcoin, Bitcoin Core, to emphasize that they believe their version is closer to Satoshi's original white paper), they took a chunk of the community and the miners with them. Today, Bitcoin remains dominant with about 88% of the mining power and Bitcoin Cash has the remaining 12% of the miners and perhaps 5% of the users. This further exacerbated the decline of the BTC Dominance statistic.

Bitcoin makes the market, but is that changing?

If we look at the YTD change in Bitcoin's price and compare that to the change in value of all other cryptocurrencies excluding Bitcoin, they're both down almost exactly the same amount, -41% as I write this, on June 3rd 2018. Bitcoin was the first cryptocurrency and the most well-known. I think it's not too far afield to make the leap that if we can model Bitcoin's trajectory, we might know something about cryptocurrencies in general, and the cryptocurrency market at large (at least the portion of it that's open and permissionless).

Of course, before we get too wrapped up in that line of thinking we need to consider the current situation and ask ourselves what might change what we know going forward. Here's a short list.

This is not an exhaustive list, just something to get us thinking. 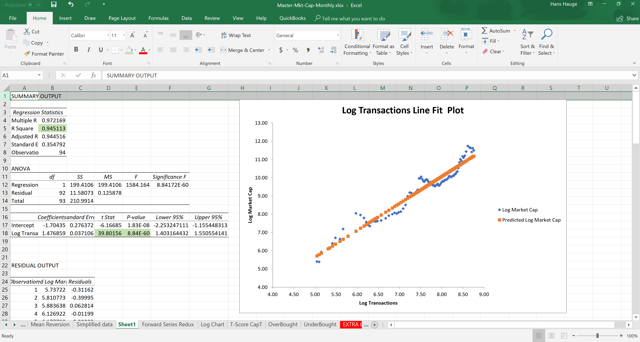 The question you are probably asking yourself is, "why?"

I believe that there are only two possible futures for Bitcoin. In one, the experiment keeps going and the price ratchets up further as the cycles of speculation and market correction continue. Eventually Bitcoin gains broad acceptance all over the globe and becomes just part of the global economy (possibly a reserve currency).

The second alternative is that the whole thing comes crashing down in flames. This could be caused by one of the risk factors that I wrote about in my blog, for example.

The scenario that I think is impossible is one in which Bitcoin's price just levels off remains flat for the next three years. In fact, I'll argue that it's impossible for that to happen. Here are the reasons:

With a falling or stagnant user base and a weakened computing network, the system would eventually collapse. That's why I say Bitcoin's future is binary. It either continues to grow into the massive global behemoth it was meant to be, or it completely falls apart.

Therefore, the longer the blockchains of Ethereum and Bitcoin get, the closer they get to fulfilling their potential. That's why the total number of transactions matters; it's evidence that the experiment is working.

By applying some of the techniques for modeling Bitcoin's growth, we can get some insight into the cryptocurrency market cap itself. The number of total transactions gives us a pulse on the cryptocurrency space. Either it's growing, or something has gone terribly wrong.

Hans Hauge
2.54K Followers
I started my career as a factory manager and then switched over to software. Along the way I got a BS in IT, an MBA, and discovered Bitcoin. I started a couple small companies and wrote a few articles about cryptocurrency. Eventually I became the opinion leader on Seeking Alpha for the Bitcoin/Crypto. Currently heading up quantitative strategy at Ikigai.
Follow