Does the small cap rally have more room to run? 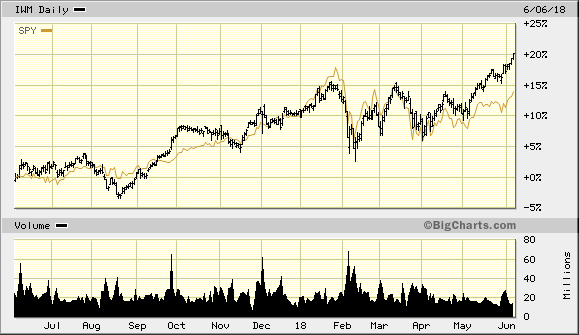 In general, small cap stocks are more U.S.-centric because they do not have the resources to sell their products internationally. Similarly, the products of small cap companies may not have the same demand overseas, thus small cap companies are often times limited to sales in the U.S. only. According to data from FactSet, U.S. revenue exposure for small cap stocks in the Russell 2000 is 79.4%, a substantial difference from the S&P's 69.7% domestic exposure and the Dow's 61.7%. Thus, in times of international turmoil, small cap stocks can be seen as more of a safe haven from geopolitical concerns, currency fluctuations, and tariff issues than large cap stocks.

As per the consumer confidence report: "Consumers' assessment of current conditions improved in May. Those claiming business conditions are 'good' increased from 34.8 percent to 38.4 percent, while those claiming business conditions are "bad" decreased from 12.3 percent to 12.0 percent." Both of these results bode well for the upside potential of the stock market, and, more specifically, the beginning of a great growth opportunity for small cap stocks.

This strong outlook can also be seen in the Small Business Optimism Index. In the index's most recent report, small business optimism is at all-time highs, never before seen in its 45-year history. Additionally, the number of small businesses reporting poor sales fell to a near record low. "Never in the history of this survey have we seen profit trends so high," said NFIB President and CEO Juanita Duggan. "The optimism small business owners have about the economy is turning into new job creation, increased wages and benefits, and investment." 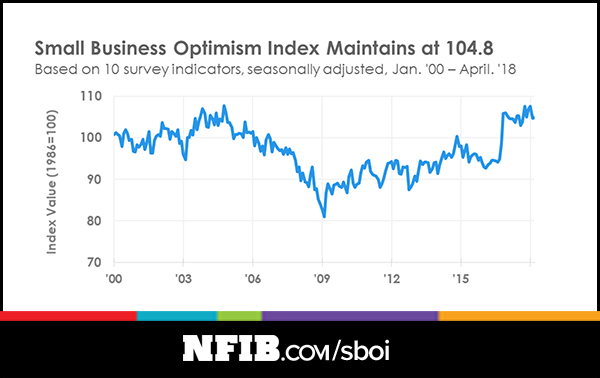 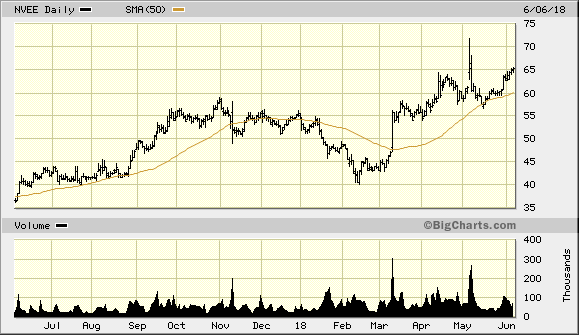 Revenues increased 47.5% mainly due to acquisitions. Gross revenues stood at $94.5 million in Q1 2018, up 47.5% versus $64.0 million in Q1 2017. The increase in gross revenues was primarily due to the contribution from acquisitions completed subsequent to the first quarter of 2017 as well as organic growth. During Q1 2018, NVEE experienced significant wins resulting in organic growth of each of its five verticals. Organic growth for the quarter was 10%, an increase of 67% compared to the first quarter of 2017.

Strong M&A pipeline. Management noted a robust acquisition pipeline and a number of additional opportunities in the second half of this year. The acquisition of Butsko Utility Design in Q1 2018 adds additional leadership and technical resources that should allow NVEE to further grow its national energy platforms. In Hong Kong, NVEE acquired CSA consultancy, a well-established and well-known MEP design and technology firm. This strengthens the Company's presence in Hong Kong and extends its international footprint. 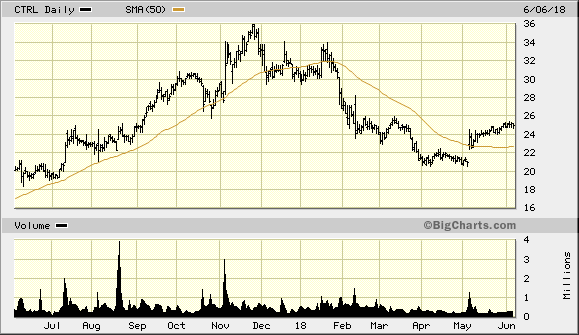 Control4 is a leading provider of smart home and business solutions that are designed to personalize and enhance how consumers engage with an ever-changing connected world. Their products unlock the potential of connected devices, making entertainment systems easier to use and more accessible, homes and businesses more comfortable and energy efficient, and individuals more secure. The company announced better than expected first quarter results with revenues increasing 18% to $59.1 million and EPS up 75% YoY.

Revenues up 18% vs. prior year. Total revenues were up 18% to $59.1 vs. $50.2 million in the prior year quarter, and down sequentially vs. $68.1 million in the preceding (December) quarter. We forecast revenues of $57.7 million for the current quarter. The increase was largely attributable to revenue growth in both North America (+17% YoY) and international (+22% YoY) segment on account of new dealer additions as well as growth from existing dealers.

Non-GAAP gross margin of 53.6%. CTRL delivered non-GAAP gross margin of 53.6%, compared to 51.9% in Q4 2017 and 51.8% in Q1 2017. The increase is primarily from a combination of favorable fluctuations in exchange rates and markets, as well as lower programmatic price reductions during the period. The management noted that incremental investments starting in Q2 2018 in its global fulfillment centers to accommodate growth and improve delivery times will moderate gross margin improvements during the balance of 2018. 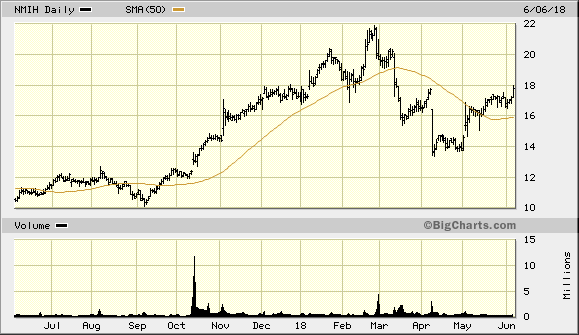 NMI Holdings, incorporated on May 19, 2011, provides private mortgage guaranty insurance through its insurance subsidiaries. The company's primary insurance subsidiary, National Mortgage Insurance Corporation (NMIC), is a mortgage insurance (MI) provider on loans purchased by the Government-sponsored enterprises (GSEs). In Q4 2017, NMIH delivered better than expected growth on the revenue side, with premiums up 53% from Q4 2016.

Total new insurance written (NIW) of $6.9 billion in Q4 2017. NIW mix was 83% monthly premium product, which compares with 79% in the prior quarter and 75% in the fourth quarter of 2016. The monthly fee product delivers predictable cash flow over a longer period of time, while the one-time product delivers much more cash up front. The company wants to keep a mix of about 80% monthly fees, as this creates a good balance between cash now and a longer, more predictable source of cash flow.

Thank you for reading our research report. We hope that this report has inspired you to read more about small cap stocks as a potential investment opportunity both now and in the near future.

If you are interested in more of our research, sign up for a free trial to Best of the Uncovereds now!

Singular Research
2.69K Followers
Author of Best of the Uncovereds
Coverage of under-followed companies from an experienced team.
Singular Research aims to be a trusted supplier of independent research on micro/small cap companies. We provide initiation reports and quarterly updates on roughly 40 uncovered companies. We cover growth and value style equity ideas leveraging the extensive experience and knowledge of our in house staff of over 6 CFA's. Award winning original research with a following of over 105 institutional clients with over $60 billion in assets under mgmt. Singular is closely associated with the existing author Cook Capital Management.

Disclosure: I am/we are long NMIH. I wrote this article myself, and it expresses my own opinions. I am not receiving compensation for it (other than from Seeking Alpha). I have no business relationship with any company whose stock is mentioned in this article.