We know this… we really know it. This is awkward. Gold is a metal. This is why it used to be money for thousands of years: it was rare, tangible and its supply couldn't be increased at will. An ideal store of value. So why are we saying that gold is not commodity?

We mean here not the physical attributes of gold, but the approach to valuing it. You can model it either as a currency, or as a commodity. From the investment point of view, we always treated gold as a currency, so in the previous part of this edition of the Market Overview, we discussed - in line with that approach - the three most important drivers affecting the price of gold. Now, we will present the final critique of treating gold as a commodity.

Many analysts attempt to develop a fundamental model for the price of gold by focusing on such statistics as mine production and industrial usage. They thoroughly analyze the changes in physical demand, supply, the marginal costs of mining, etc. However, this approach is fatally flawed since these figures constitute only a minuscule fraction of the total gold supply.

Hence, changes in the above ground stocks - which are crucial for typical commodity prices - are virtually irrelevant for the price of gold. As gold is not consumed, nearly all gold in the world that has ever been mined is still in existence, most of which is available for sale at what its owners believe to be the appropriate price. There is more than 180,000 tons of gold above ground. Meanwhile, the daily mining output of bullion is only about 9 tons (the annual new output adds only 1.8 percent to the global holdings). Now, it should be clear why changes in the supply have really limited impact on the price of gold.

However, it's not so simple after closer inspection. You see, the costs do not determine the prices. Economists have known this since the marginal revolution in 1871. Value is subjective. The price of gold depends on how badly do people want or need gold, not on the costs to mine it. And these costs differ among companies and over time. We mean that there are no set costs to mine the ounce of gold. Each year, there are some gold mining companies which operate at production costs higher than the price of gold (i.e., they lose money).

Actually, the causality runs from prices to production costs. When gold prices rise, some deposits which were previously unprofitable will start being mined. As these include deeper mines or yielding a lower quality of ore, it would push up the average cost of production. And when gold prices decline, these high-costs or lower-grade deposits will be dropped, reducing the productions costs. Hence, the cost of mining gold follows the price of gold, not the vice versa.

Just look at any data. The chart below shows the cost of mining gold for Agnico Eagle (AEM), one of the 10 biggest gold producers in the world, over time. It increased during the gold bull market in the 2000s and declined during the subsequent bear market. 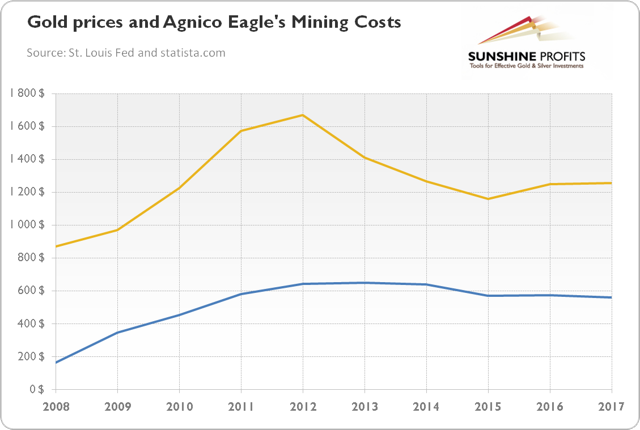 Another important issue here is that gold miners have low market power due to the enormous above ground gold stocks. As the annual flow from mines is exceptionally small compared to gold accumulated holdings, any attempt to run a cartel and set prices would fail. Hence, gold mining companies are price takers rather than price setters. It implies that they have to accept the market price, no matter what are their costs. In other words, there is no force in place to prevent the price of gold from falling below a certain level, i.e., the particular cost to mine it.

To sum up, gold behaves like a currency, so its price has to be modeled like a currency. The commodity approach is terribly wrong. Gold is a metal, just like copper, but it has an exceptionally high stock-to-flow ratio. Many analysts forget about that. But we don't. So we know that factors such as the annual mining production have almost no impact on gold prices. And also contrary to many erroneous opinions, mining costs do not set a floor below which gold prices cannot fall. They can, as prices depend on subjective valuation. A decline in gold prices eliminates the least effective mining companies, pushing the average production costs down. Thus, the causal relation works from prices to costs. Analysts do not have to know that, but you should!

Arkadiusz Sieroń
600 Followers
Arkadiusz Sieroń is the author of the Market Overview reports at SunshineProfits.com and a certified Investment Adviser. He is a long-time precious metals market enthusiast, currently a Ph.D. candidate, dissertation on the redistributive effects of monetary inflation (Cantillon effects). Arkadiusz is a free market advocate who believes in the power of peaceful and voluntary cooperation of people. He is an economist and board member at the Polish Mises Institute think tank. He is also a Laureate of the 6th International Vernon Smith Prize. You will find his work on gold at http://www.sunshineprofits.com/gold-silver/gold-market/
Follow