Stocks are down significantly in Tuesday's trading, with all the major US indexes down at least half a percent as of this writing. The story grabbing the headlines is that the trade dispute between China and the US continues to escalate. The Trump administration is proposing much larger tariffs against Chinese goods than previously discussed, and the Senate passed an amendment to take away the provision that would have allowed ZTE Corp. (OTCPK:ZTCOY) to keep doing business in the states.

This led to a major decline in Asian shares, with the two major Chinese indexes down 3.8% and 5.8% in their trading session. The China A-Shares ETF (ASHR) is down 3.4% at the time I'm writing this. Bloomberg reported that as many as 1,000 Chinese equities traded down 10%+ during their trading session. Not surprisingly, that sort of selling rippled to other markets, including the US, for Tuesday's trading.

However, I don't see these tariffs as a big deal. SA author Alan Longbon put it well in his article Trump Trade War Is A Side Show:

Except for China, the impact on US allies from the trade war is relatively minor at between one and five percent of total trade between the nations.

The actions against Canada, Mexico, and the EU are more bluff and bluster than a real threat to overall trade and prosperity. Though, no doubt catastrophic for specific companies and sectors of the economy. At the macro level, the trade war impact on these countries is a pinprick.

On various occasions after Trump was elected, we heard stories of how the Mexican economy was going to plummet. Trump's fiery rhetoric was one thing, but tangible damage to Mexico specifically or Mexican-US trade relations more generally has been modest. It appeared that Mexico and the US were near an acceptable deal on NAFTA (with Canada's demands being the biggest sticking point) earlier this year. In any case, Trump hasn't used executive orders or other forms of influence to affect things dramatically. Any sell-offs in the Mexican Peso or Mexican equities (EWW) due to trade concerns have generally been strong buying opportunities.

Now, China is a different kettle of fish. Given its much larger economy, China has a much larger downstream impact on other countries - particularly emerging market resource-based economies - if the economy slows there. Hence, the US market selling off on the larger proposed tariffs.

Expect the same general development of the story, though. After Trump's big bluff, some far smaller actual action will occur. Congress is unlikely to go along with a plan that would wreck Chinese-American trade relations; too many jobs in politicians' home districts would come under fire otherwise. Trump himself has gloated numerous times on his Twitter account about how well the stock market and unemployment numbers are going during his term. It's not in his personal interest to trigger a market correction while inciting a global trade war.

A common complaint investors have about business writing is that the journalists need to come up for some explanation about why stocks went up or down. When markets make a big move, everyone wants a story to explain it. Unfortunately, the real story in this case is a lot less headline-friendly than something big and exciting like a supposed trade war.

The bigger concern, however, should be that emerging markets are having a terrible 2018 so far. Charlie Bilello put up a nice table:

Every emerging market he profiled is down for the year, and some are down sharply. As I noted recently, Colombia (GXG) is having a splendid year between its political situation improving and oil prices spiking, and yet it's up just 5% year to date. But when the rest of the field is in the red, and five markets are down 15%+, it's not hard to see why GXG hasn't done much yet.

It's felt like emerging market whack-a-mole in recent weeks with first Argentina, then Turkey, and most recently, Brazil losing control of their currencies. Though they've garnered less attention (so far), South Africa and Indonesia are both seeing major foreign investor capital flee in recent weeks. The South African Rand, for example, is down a quick 10% over the past month: 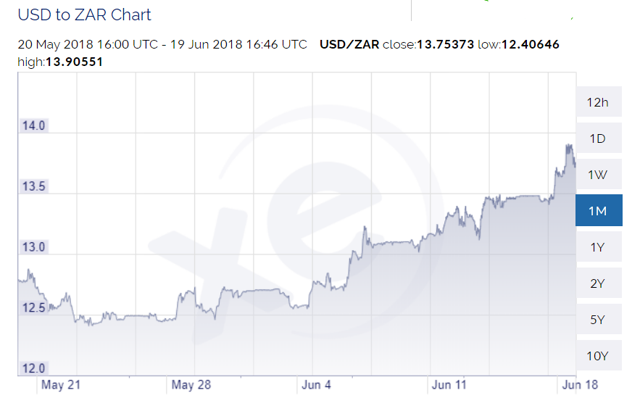 The reason for the weakness in emerging markets isn't too hard to figure out. New Fed Chairman Jerome Powell has come out firing. Some market observers had expected the Fed to strike a more dovish stance given emerging market sell-offs and the yield curve continuing to head toward inversion.

Some members of the FOMC board had recently noted their concern that the interest rate curve continues to flatten. We've already reached post-financial crisis record levels of flatness recently, and there is little sign of it letting up. Historically, the US economy has almost never avoided a recession after the curve becomes inverted.

And yet, the Fed seemed to pay these matters little concern with this policy meeting. Why would that be? My theory: the US economy is booming, and Powell is going to keep hiking rates until that fact changes.

Inflation (as measured by the CPI) just hit its highest tick since 2013 and is moving above the Fed's 2% target. New unemployment claims are hitting historic lows - jobs are so widely available that even consistent Trump critics such as the New York Times are praising how well the employment scene is faring under his watch.

"The main takeaway is the economy is doing very well. Most people who want to find jobs are finding them."

In fact, the takeaway appears to be rather simple - the Fed may be thinking about accelerating rate hikes going forward. Powell notably decided to start having press conferences with every Fed decision, rather than every second meeting, in a move that led some to conclude that Powell thinks he may need to hike rates in every meeting going forward for awhile. Powell denied such thoughts, but that doesn't necessarily mean much. Additionally, the Fed removed the following statement from their updated commentary about their benchmark interest rate:

"[It] is likely to remain, for some time, below levels that are expected to prevail in the longer run."

Add it all up, and we appear to have a new Fed chair who cares more about the strength of the US economy, and less about short-term movements in financial markets. It's doubtful that Bernanke or (especially) Yellen would have struck such a hawkish tone with all the chaos in Brazil, Argentina, and Turkey lately.

This leaves markets in an interesting place going forward. If Powell has pulled the so-called Fed put for markets, we should get more volatility going forward. The US economy is running significantly stronger than much of the rest of the world. Given the large tax cuts and the general upturn in sentiment in recent quarters, the economy is booming and should be expected to continue doing so for at least a few more quarters.

Yet, that's not the case everywhere else. Japan's economy is flirting with returning to negative growth again, and Europe is showing mixed signals. And clearly, the rebounding US dollar and rising interest rates are creating a world of problems for emerging markets.

It'd be a mistake to view all these emerging market panics as one-off events. It's no coincidence that they're all happening at the same time. As long as rates keep rising in the US, investors will be tempted to pull money from riskier markets back to safety. When the risk-free rate goes up, it lowers valuations and investor appetite for everything else. As long as the Fed keeps on with aggressive rate hikes, capital will keep leaving emerging markets, creating more accidents.

This sort of situation has happened before, witness the 1997-98 emerging markets crisis, which rippled from one country to another. The US economy and stock market were booming, thanks to the internet and the productivity growth it ushered in for the economy. It'd take emerging market waves washing up in the US and sinking superstar hedge fund Long-Term Capital Management in late 1998 before Greenspan took aggressive action. The US stock market wobbled but recovered and went on to massive additional gains before finally topping in 2000.

What will happen this time around? History rhymes but rarely repeats. A similar situation is setting up, however, with a booming US economy and a much less healthy rest of the world. As long as Powell focuses on the strong economic numbers in the US, rather than the sinking currencies and equities elsewhere, expect rising levels of volatility going forward. That doesn't necessarily mean the US bull market will end (it didn't in 1998) but stocks should get less sleepy, especially after traders get back from the summer vacation. Markets often make their sharpest corrections in September-October; a sizable drop this fall would not surprise me.