The latest Conference Board Leading Economic Index (LEI) for May increased to 109.5 from a revised 109.3 in April. The Coincident Economic Index (CEI) came in at 103.7, up from the previous month.

The Conference Board LEI for the U.S. increased again in May. Positive contributions from the ISM® new orders index, the financial components and consumer expectations for business conditions more than offset the negative contributions from building permits and working hours in manufacturing. In the six-month period ending in May 2018, the leading economic index increased 3.0 percent (about a 6.1 percent annual rate), the same rate of growth as over the previous six months. In addition, the strengths among the leading indicators have remained very widespread.

The Conference Board CEI for the U.S., a measure of current economic activity, also increased in May. The coincident economic index rose 1.0 percent (about a 2.0 percent annual rate) between November 2017 and May 2018, somewhat slower than the growth of 1.2 percent (about a 2.4 percent annual rate) over the previous six months. In addition, the strengths among the coincident indicators have remained very widespread, with all components advancing over the past six months. The lagging economic index continued to increase at a faster rate than the CEI. As a result, the coincident-to-lagging ratio decreased. Meanwhile, real GDP expanded at a 2.2 percent annual rate in the first quarter, after increasing 2.9 percent (annual rate) in the fourth quarter of 2017. [Full notes in PDF]

Here is a log-scale chart of the LEI series with documented recessions as identified by the NBER. The use of a log scale gives us a better sense of the relative sizes of peaks and troughs than a more conventional linear scale. 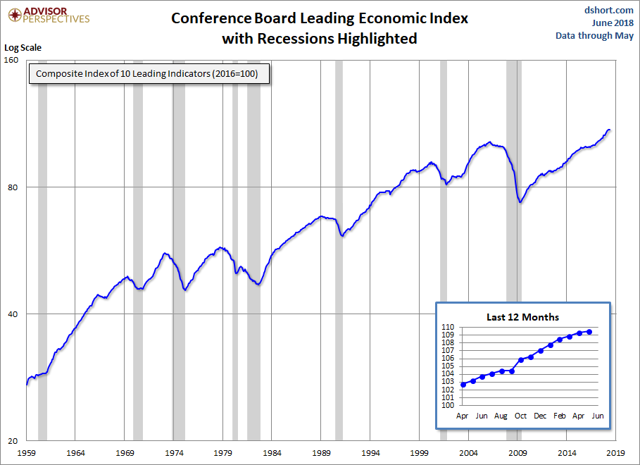 For additional perspective on this indicator, see the latest press release, which includes this overview:

"While May's increase in the U.S. LEI was slower than in recent months, the improvements in a majority of its components offset the declines in leading indicators of labor markets and residential construction," said Ataman Ozyildirim, Director of Business Cycles and Growth Research at The Conference Board. "The U.S. LEI still points to solid growth but the current trend, which is moderating, indicates that economic activity is not likely to accelerate." 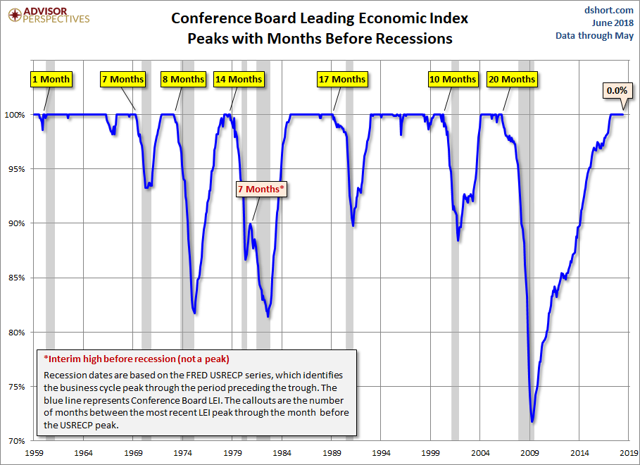 LEI and Its Six-Month Smoothed Rate of Change

Based on suggestions from Neile Wolfe of Wells Fargo Advisors, LLC, and Dwaine Van Vuuren of RecessionAlert, we can tighten the recession lead times for this indicator by plotting a smoothed six-month rate of change to further enhance our use of the Conference Board's LEI as a gauge of recession risk. 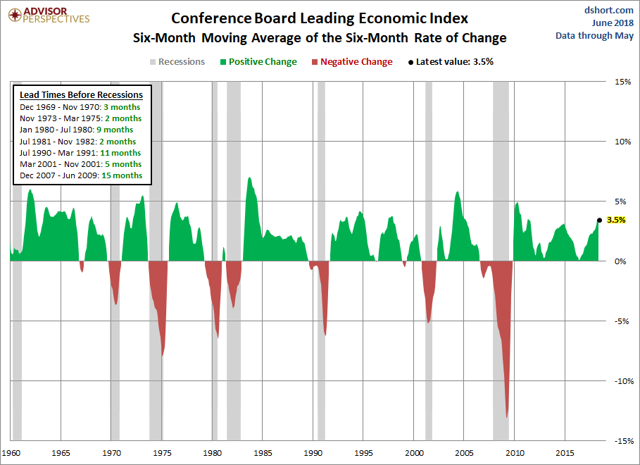 As we can see, the LEI has historically dropped below its six-month moving average anywhere between 2 to 15 months before a recession. The latest reading of this smoothed rate of change suggests no near-term recession risk. Here is a twelve-month smoothed-out version, which further eliminates the whipsaws: 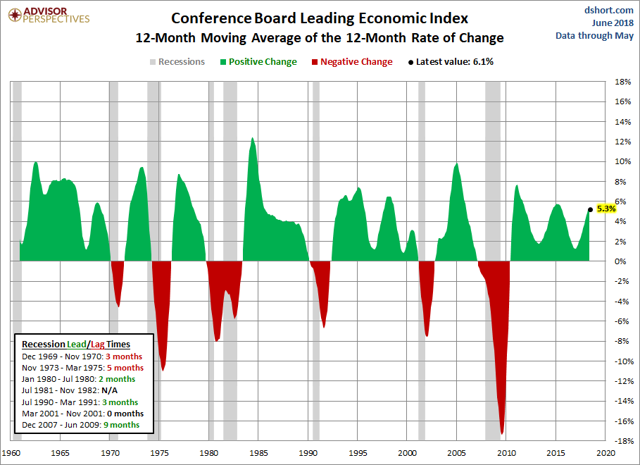 The Conference Board also includes its CEI in each release. It measures current economic activity and is made up of four components: nonagricultural payroll, personal income less transfer payments, manufacturing and trade sales, and industrial production. Based on observations, when the LEI begins to decline, the CEI is still rising. Here's a chart including both the CEI and LEI. 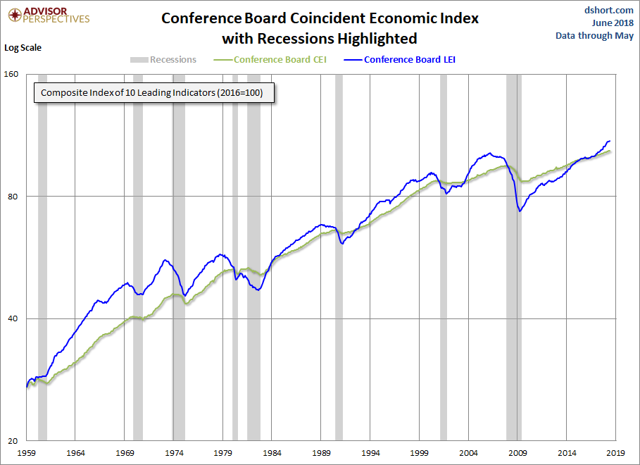 Here is a chart of the LEI/CEI ratio, which is also a leading indicator of recessions. 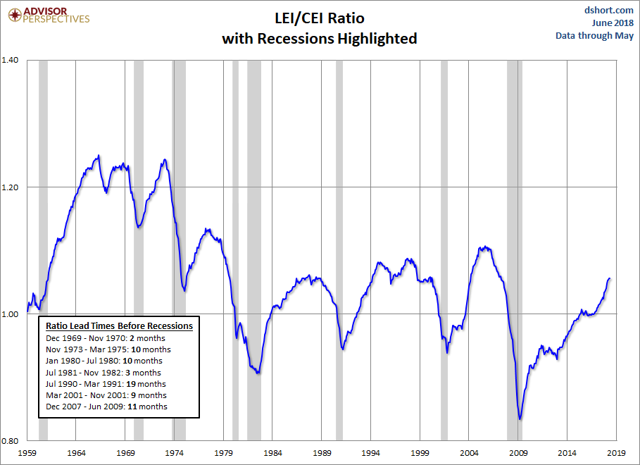