Breakthrough Therapy designation is one of the sexier pre-approval stamps that the FDA can place on a drug.

Many shareholders are confused about what this designation means, and what it does for a drug.

In this article, I will consider the implications for Breakthrough Therapy designation, as well as how it can affect your planning in investing.

This article was provided early to members of the Total Pharma Tracker.

Author's note: This article was presented early to subscribers of the Total Pharma Tracker, and they also got further insight into how best to use these tools in making investment decisions.

The world of biotech investing revolves first and foremost around the regulatory agencies like the Food and Drug Administration (FDA) and European Medicines Agency (EMA). In particular, the FDA is arguably the single most important arbiter for what gets to pass, particularly in the world of cancer.

Oftentimes, they set the tone for what is acceptable practice in cancer medicine by being the first to allow drugs to market ... or the first to deny them. Obviously, there are exceptions. Let's get those out of the way immediately:

But as a general rule, we can count on a few truisms. First, the FDA is generally going to be the first regulatory body to put the stamp of approval on a new drug in cancer research. Second, rejection by the FDA is probably going to mean delays in other agencies, as well. Third, and the main focus of today's article, the FDA telegraphs how it feels about drugs before they reach the new drug application (NDA) stage.

What Is Breakthrough Therapy Designation?

In cancer medicine, Breakthrough Therapy designation is the newest of the possible FDA stamps, having been created as part of the Food and Drug Administration Safety and Innovation Act of 2012. This designation was designed to address concerns that promising investigational medicines were taking too long to get through the clinical trials process, in spite of the possibility of accelerated approval and compassionate use granted by the FDA. Recall in my last article on cancer stock screening that the timeline for an average drug to go from phase 1 to approval remains in excess of 10 years.

Breakthrough Therapy designation offers a number of benefits for the drug developer. First, they get the benefits of Fast Track designation, including more frequent interactions with the FDA and the opportunity to undergo a rolling submission of an NDA, where the application can be submitted in pieces to expedite review.

In addition, the FDA will provide advice to make sure the design of clinical trials will be efficient yet informative for the purposes of approval. The new drug application will also qualify for priority review and possible accelerated approval.

The most important part of these benefits would seem to be the intensified interaction and leeway from the FDA in terms of design, implementation, and review of clinical trials. Obviously, it's quite difficult to quantify the benefit of this kind of interaction, but it stands to reason that increased visibility with the FDA can prevent major delays in the future. The fact that the FDA involves its senior officials in the review of these applications is another fringe benefit of Breakthrough Therapy designation.

It's often a pretty big deal when a company gets its drug Breakthrough Therapy designation. Just the name of the designation alone suggests that the FDA has all but stamped the drug with a guarantee of approval. In fact, the agency has come under some fire for this, since it makes the FDA seem less impartial a judge of the merits of the drug.

Part of this criticism is that when the government hails something as a "breakthrough," then the press is more likely to label it some kind of miracle cure. Most drugs are going to fall well short of deserving that title, although we do see some miraculous results in cancer medicine from the breakthrough medications. But "Breakthrough" is a technical designation, for which the company simply needs to meet a certain set of criteria. They don't actually need to cure the disease in question.

But investors looking to factor Breakthrough Therapy designation into their calculus may find themselves wondering, "Does this actually shorten times to review?"

In short, yes ... sometimes by quite a bit. We can pretty easily find whole lists of all Breakthrough Therapy designations. What I wanted to do for this article was consider just the designations fitting these parameters:

Now why do this? If you recall from my last article, we have the ability to screen stocks based, in part, on where they are in development compared with how much money the company has.

I took a bit of flak for that! "It's too simplistic a tool," some said. And I agree. Designations like Breakthrough Therapy can have a big impact on timelines. Have a look at this table:

Note a few things. First, this refers to oncology only, as that's my biggest area of interest. However, I have pulled the same information for the other Breakthrough Therapy Designations for your perusal. Just like before, I have made this file available on my website so you can play around with it as you like.

Second, this does not include non-approved drugs. We'll get to that.

Some key data from this analysis

The first thing I notice from this analysis is that the times for these drugs from beginning of their clinical trials to the end is seriously curtailed compared with what I would expect. In fact, on average, drugs that eventually get Breakthrough Therapy designation and then approval take on average 5.667 years from the earliest documented clinical studies to time of approval. As you'll see below, there is a lot of variation here, with a standard deviation of 2.442.

This implies that drugs qualifying for Breakthrough Therapy designation take around 3.2 to 8 years to get approved, compared with the 10+ years I would personally assume for any given drug based on average length of trials I described in my cancer stock screener article.

Here is a figure showing you the normalized time to approval from the earliest announcement of clinical trials. The red line marks the time the drug was in study before receiving Breakthrough Therapy designation, at which time the line turns blue. 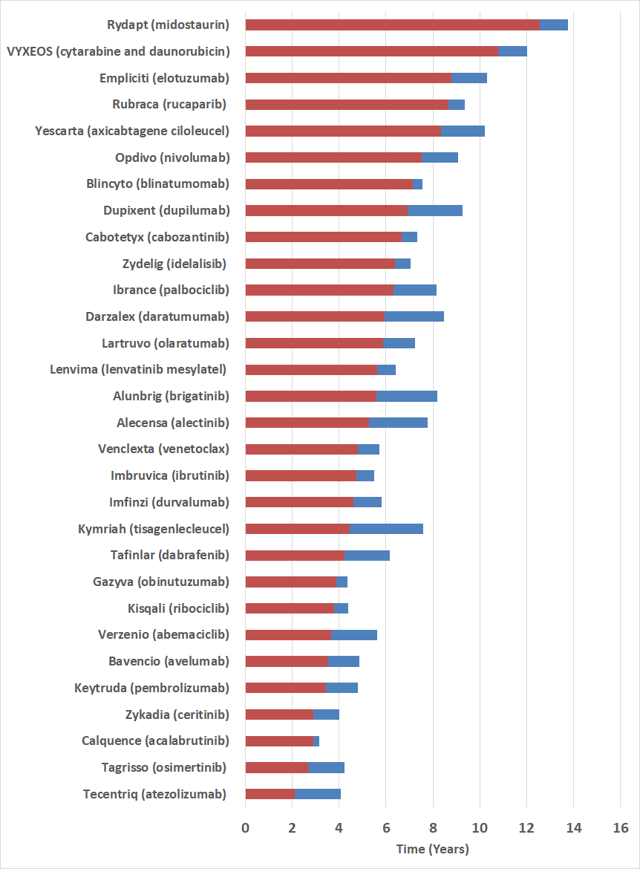 As you can see, some of these first approvals came ridiculously quickly, showing you the possibilities that come with Breakthrough Therapy designation. Interestingly, the shortest bars are some of the newest drugs that kind of came out of nowhere and drove forward the standard of care in their respective areas.

However, the long story made short is that a drug that gets good enough data to see Breakthrough Therapy designation is also highly likely to have an abbreviated timeline.

One important caveat you should consider, though, is the role of selection bias here. These are all fantastic, groundbreaking drugs in their own right. They got approved quickly because they were, by and large, game changers in their respective fields, and they showed it early enough for Breakthrough Therapy designation to make a difference.

It wasn't necessarily the Breakthrough Therapy Designation that caused these drugs to get approved, but receipt of this stamp from the FDA coincides with a shorter-than-expected time to approval.

Nice facts. Can I use it?

There are some important lessons we can draw as investors from this information. First, it is obvious that in many cases, large companies are the ones most likely to get the data needed to qualify for Breakthrough Therapy designation, so this may not help so much with speculative stocks.

However, there are a few exceptions to that ... consider this list of cancer medications that currently have Breakthrough Therapy designation but have not yet been approved:

Now, this list obviously has some issues. First and foremost, to me, is the inclusion of rindopepimut, which failed spectacularly for CLDX.

But I've kept it here to illustrate something important: Breakthrough Therapy designation does not guarantee approval, and you should be careful in considering it a strong indicator as such.

Of course, we see a number of the usual big pharma players here. I think these should go into any of your own calculus when trying to build a portfolio of cancer stocks, but that's beyond the scope of this article. I present that information to you for context.

What I'm most interested in is seeing how this information might be combined with the screening tool I recommended you use. Can it alter the risk level?

In short, yes. I'll request a mea culpa for the original run of the screening tool. There were some notable omissions in there, most notably of all Immunomedics (IMMU), who are developing sacituzumab govitecan.

There are 6 companies that were on the original screening chart and have a Breakthrough Drug: BPMC, GLYC, MEIP, PGNX, SNDX, and TOCA. How does the calculation change for them?

So overall, as I imagined with my "caveats" listed above, it seems we cannot draw a firm conclusion about the timeline to approval for a drug that has not yet been approved. However, it does give us an even better tool to focus on those companies that have the strongest cash position. Importantly, we can see the companies that have a shaky cash position but a potentially very strong catalyst in the near future.

This may help us to further refine the list of cancer stocks that remain speculative but promising. Moreover, it can help you prognosticate on the potential consequences of the FDA's most momentous designation prior to a drug's approval. Overall, I hope you find this information interesting, just like I do. I have always been under the impression that Breakthrough Therapy designation would be a huge catalyst for any of my speculative holdings.

This may not be true, after all, although it can be an important tool for telling which drugs are destined to be approved and make a big difference in the standard of care.

Thank you very much for reading yet another lengthy article! This, just like screening a stock, is one piece of analysis you need to take into account when trying to find promising investments. Actually acting on it is a whole different beast, and for that I recommend some kind of strategy. I am biased for my "No BS Plan," which can help you develop the discipline you need to minimize your losses while accruing your gains.

Follow Zach Hartman and get email alerts
+
Add a comment
Disagree with this article? Submit your own.
To report a factual error in this article, click here.
Your feedback matters to us!