IHS Markit's PMI surveys signal another bumper month of employment growth in June. The flash survey results, which are based on approximately 85% of usual replies received in any given month, showed employment rising robustly at the end of the second quarter. The weighted index of manufacturing and service sector job creation registered 53.4, remaining well above the 50.0 level which is the neutral cut-off point between expansion and contraction. At this level, the survey employment gauge is historically consistent with non-farm payrolls rising by 190k at the end of the second quarter.

Official non-farm payroll data are released on 6th July, and are typically one of the most market-moving numbers in the trading calendar. While a high standard error 1 in the official data means forecasting the precise numbers is far from straightforward, the PMI series exhibits a strong correlation with the official data which can add significantly to estimations of upcoming umbers. 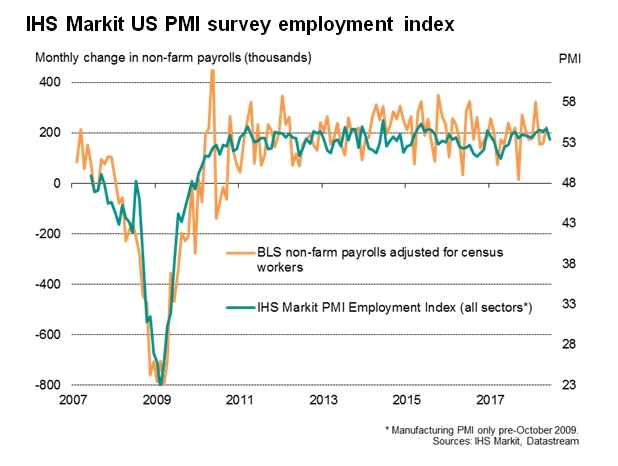 Since the IHS Markit PMI data were first available in 2009, covering business trends in both manufacturing and services, the survey indicator of total employment has exhibited an adjusted r-square of 0.894 in an OLS regression with non-farm payrolls. The correlation between the PMI employment index and non-farm payrolls is 95%2.

Over the course of 2017, a PMI-based regression predicted an average non-farm payroll gain of 182k, which is exactly in line with the current estimates from the Bureau of Labor Statistics. For the first five months of 2018, the PMI has pointed to an average 219k gain, which is slightly above the current BLS estimate of 199k, suggesting the latter may get revised higher.

However, while the payroll gain indicated by PMI data remained strong in June, it was nevertheless the weakest recorded for a year, suggesting some pull back in recruitment compared to prior months. Furthermore, other indices from the PMI survey hint at a possible further slowdown in hiring in coming months.

First, new orders growth weakened to the slowest seen so far this year, and in the factory sector have even dropped behind output growth for the first time this year. With output growing faster than order books, production capacity may be reined-in in coming months unless demand revives.

Second, firms' expectations of future output growth slipped to the lowest since January. If output expectations have fallen, it's likely that hiring intentions have likewise cooled.

1 The confidence interval for the monthly change in total non-farm employment from the establishment survey is on the order of plus or minus 115,000. See BLS overview for more information.

2 We use a three-month centered moving average of the non-farm payroll data in these comparisons to remove some of the volatility in the official data.

Follow Markit and get email alerts
+
Add a comment
Disagree with this article? Submit your own.
To report a factual error in this article, click here.
Your feedback matters to us!