We're broke and no one seems to care. We're all aware that this country owes a lot of money, but no one cares because we're leading pretty good lives here. We have yet to feel the consequences of being broke, but that won't last long. Some things are already breaking, and an ultimate breakdown is on the way. 2018 is the first year when tax receipts won't pay for Social Security and Medicare benefits. We are spending down the corpus, and will have spent all of the Social Security Trust by 2034, while Medicare monies will only last until 2026. This might sound like we have time, but we don't, especially since nothing is being done to head off these catastrophes. It's full speed ahead into the reckoning. Furthermore, some large pension funds are broke, and are likely to renege on their promised benefits. In the following, we share some details on this bankruptcy, and offer some actions that might help, although they are unlikely.

As shown in the following graph, the reported national debt of $34 trillion is currently 120% of GDP, a level only seen before in the wake of World War II. But unlike the last time, there are no signs that debt has peaked. We use a percentage of GDP to convey our ability to pay. If every dollar of output our country generates this year were used to pay our debt, it would not be enough. Of course we're not obligated to pay right away and therein lies our ho-hum attitude; we trust some miracle will solve the problem someday. 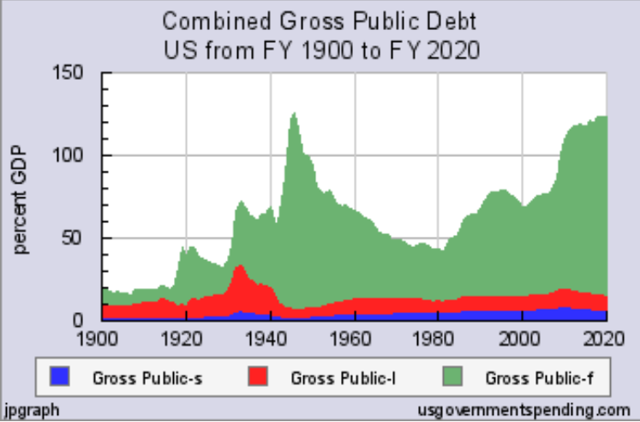 But that's not the whole story. We've made promises to older people that simply can't be kept unless the promises are changed (broken) and we burden today's young people with much higher taxes; the fixes are not pretty. As shown in the last row of the following table, the present value of the promise to pay Social Security benefits is $29 trillion more than projected receipts, and adding Medicare's $47 trillion promise brings our off-the-books liability to $76 trillion, more than twice the published liability. Our all-in national debt is an astronomical 390% of GDP.

What you should know about Social Security and Medicare

What Can Congress Do?

Congress can address these problems by reducing spending or increasing taxes, or a combination of both, but the required magnitude is out of the question according to Professor Laurence Kotlikoff in his The US is dead broke and the tax bill does nothing to help matters, where he states:

Yes, Uncle Sam can avoid permanently raising all federal taxes by almost 60 percent. But this means reneging on his spending promises. But even if he cuts all forms of spending (defense spending, entitlement spending, infrastructure spending, gassing up Air Force One, you name it), the needed permanent percentage cut is 47 percent!

Here's how: Successive Congresses and administrations have been systematically lying about our fiscal condition. They spent the past six decades accumulating massive liabilities that they kept off the books via clever use of language.

Congress has another choice that is equally ugly. It can print money, i.e. debase the currency. This possibility has been the driving force behind the evolution of cryptocurrencies and other ways to replace the U.S. dollar standard. In other words, this country can renege on its promises at the expense of all savers holding dollars and dollar promises.

Time will tell what Congress decides, but in the meantime, we can prepare for what is likely to be very tough times.

What Can We Do?

Our best response is to not rely on Social Security and Medicare, and if we think debasing is a possibility, we should save in a "currency" other than the U.S. dollar. Saving more is part of the answer, and holding those savings in other forms of "money" is the rest. Those other forms include precious metals, real assets like real estate, and perhaps foreign and crypto currencies. I say "perhaps" because foreign and cryptos can be volatile, and might not hold up in a U.S. hyperinflation.

Those with defined benefit pension plans are more fortunate than those without because they have a presumed annual benefit from a viable company or union rather than the government. But they too would suffer from debasing, plus some pension plans are broke, and the insurance behind them from the Pension Benefit Guarantee Corporation (PBGC) is on the brink of bankruptcy. When the PBGC was created in 1974, Jack Treynor, Pat Regan & Bill Priest wrote The Financial Reality of Pension Funding under ERISA, where they predicted the ultimate collapse of the PBGC because it was created to insure an uninsurable risk. It would appear that the day of collapse is at hand. As it stands now, healthy plans are paying most of the premiums and have to be thinking about terminating their plans because the premiums are not fair. The PBGC is going to break unless taxpayers pick up the slack, which is totally unfair.

We are broke and have decided to ignore it. The implied hope is that the repercussions will be in someone else's lifetime and that they won't be too painful. This is simply wishful thinking.

Ronald Surz
1.96K Followers
Please visit https://babyboomerinvesting.show o I'm author of 3 books: Baby Boomer investing in the Perilous Decade of the 2020s, & 2 books on target date funds I’m smart with 2 Masters degrees and 55 years in financial consulting. I’m semi-retired, and prefer helping my fellow baby boomers rather than playing golf. I’m worried that our country, & most others, is playing with fire in its money printing. I’m here to help – that’s my legacy. spaceI help investors deal with life’s investment challenges, with the objective of enjoying a comfortable long retirement. I’m passionate about questioning and improving upon entrenched stale practices like jamming everyone into cookie cutter model portfolios. That's why I produce the Baby Boomer Investing Show live on Youtube and Facebook every other Tuesday at 10:00 PST. Watch live or replay by searching for "Age Sage Robo" on Facebook or Youtube. Please watch and support our Boomer Investing Show on Patreon ( https://www.patreon.com/user?u=35204315&fan_landing=true ) and visit our SA Blog at https://seekingalpha.com/account/authorboard/instablog . As president of Age Sage Robo (please Google), and CEO of GlidePath Wealth Management, I’m responsible for model development using my patented process . I have more than 50 years of financial service experience and hold a U.S. Patent for a time-tested glide path investment process that helps investors navigate the complicated financial decisions they face as they accumulate and preserve assets for their retirement years. Age Sage & GlidePath use this process to build Target Date, Special Purpose, and Life Span Portfolios that are tailored to the specific requirements of clients. My extensive financial career began at A.G. Becker Pension Consultants where I advised on the investment policies of several trillion dollars of retirement plan assets. After Becker I started my own consulting firms that developed innovative services for investors and the financial advisors who serve them. I’ve earned a BS and MS in Applied Mathematics from the University of Illinois and an MBA in Finance from the University of Chicago. I am author of the book "The Remarkable Metamorphosis of Target Date Funds" and co-author of "The Fiduciary Handbook for Understanding and Selecting Target Date Funds"
Follow

Additional disclosure: I am a sub-advisor of the SMART TDF Index and the originator of the 1st and only Robo Analyst that integrates Age with Risk. Please visit my Blog at https://seekingalpha.com/author/ronald-surz/instablogs#instablogs.

Age Sage builds better asset allocation models that help Baby Boomers transition through the Risk Zone that spans the 5-10 years before and after retirement. Implementation of these models can be done for less than 6 basis points. Boomers are poised for a sucker punch that they’ll never shake off.