Earnings growth hit 25% in the 1st quarter for the fastest pace since the second half of 2010, blowing well past consensus estimates. Vail Resorts (NYSE:MTN) earnings through the end of January surged 56% YOY on the company’s fiscal calendar. The company’s dividend payout ballooned 30% to $1.05/share. Net income was up 56% to $248.7 million on total revenue that just squeaked north of 2% for the period to $734.4 million. Pretty good trick? A $64.6 million tax saving had just fallen from the sky the month before, courtesy of the Tax Cuts and Jobs Act (TCJA) as the company’s tax liability fell from just over 35% YOY to the equivalent of 1.42% through the end of January. Investors celebrated the seasonal bounty to date from Mother Nature and sang Hosanna praises for the outsized New Year tax gift from Donald J. Trump.

Unsurprisingly, MTN’s earnings bonanza continued through the end of April, though on a slightly reduced scale, surging 40% for the period. Dividends matched earnings growth at 40%. Revenues through the company’s remaining ski season through the spring was strong, up almost 18% YOY. Income from operations soared 43% YOY. The company’s tax liability adjusted to 21% for the company’s 3rd fiscal quarter, a reduction of 13 percentage points YOY. MTN’s share price (green line, top frame) soared 35% through today’s market close (18 June), pushing well ahead of the S&P 500 (green area, top frame, MTN:SPX ratio, middle frame) since the last week in May (see Figure 1, below). Market momentum (lower frame) is at its strongest level in the past seven years. 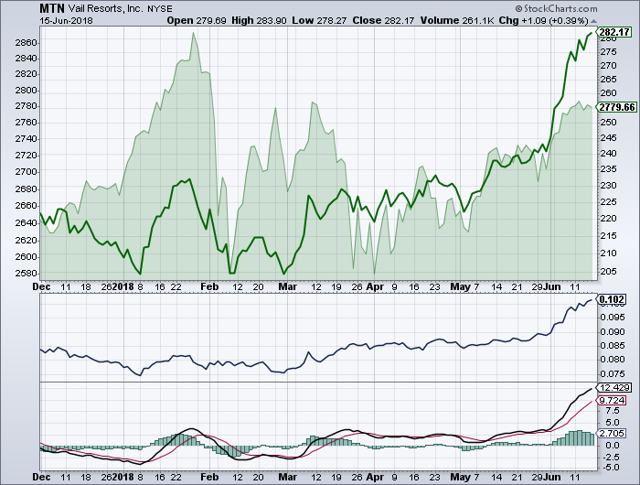 TCJA aside, MTN’s earnings picture has been strong going back to 2014, posting above 30% in each of those years. Earnings soared just under 300% in 2015, the year after Vail Holdings, a wholly owned subsidiary of Vail Corporation, assumed the latter’s rights and debt obligations. With the assumption came key credit modifications that included maturity extensions and interest rate adjustments. Dividend growth also has remained strong since 2014 with an annualized mean growth of just over 48% with two outsized years in 2015 (67%) and in 2014 (58%). 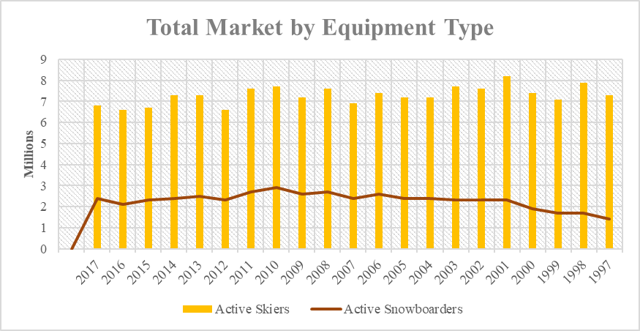 There are roughly 780 designated ski areas in the US and Canada with about 480 of those areas in the US. The ski market, which included active skiers and snowboarders through the end of the 2016-17 season came to 9.2 million, with skiers posting 6.8 million and snowboarders at 2.4 million for the period, according to the National Ski Area Association (see Figure 2, above). The average number of active skiers over the twenty-year period comes to 7.31 million, which was very evenly distributed given the median measure of 7.30 million. The range goes from a high of 8.2 million (2001) to a low of 6.6 million in both 2016 and 2012. Interestingly, the low for the period did not appear to correspond with the hit leveled on the economy by the Great Recession of 2007. By 2012, the official recovery from the biggest economic event since the Great Depression was already three years old. Snowboarders posted comprised 2.4 million of the total in 2017. The average active snowboarding population at US resorts came to 2.29 million over the period with an equally even distribution of 2.30 million for the period. Growth in both active skiers and snowboarders over the 20-year period remains confined to rather narrow ranges.

One of the key statistics in the industry is in the number of unique visits by skiers and/or snowboarders to a skiing area during the winter season using a day, extended, voucher or complimentary pass for any part of a day. Unique visitors are further broken down by the duration of that visit. Day users encompass those unique visitors within driving distance of the facility. Destination users combine skiing and/or snowboarding with overnight accommodations. Destination users also drive dining and other resort services from equipment rentals to ski/snowboard instruction to backcountry skiing via helicopter drops.

Unsurprisingly, visitations by both skiers and snowboarders to the US Rockies dwarfs any other US geographic area. Forty percent of all visitations to US resorts were in the Rockies through the 2017 season, slightly higher than the 5-year average of just over 38% (left axis). Total visitations through the 2017 season came to 54.8 million, on the upside of the average for the five-year period post of 54.2 million (right axis). Cumulative growth for the five-year period came to just over 7%. 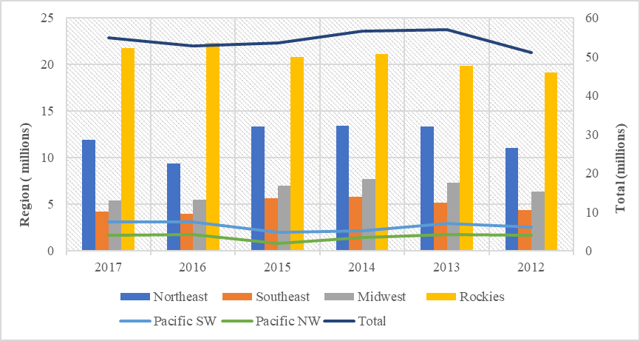 MTN has a well-diversified portfolio that includes major holdings in the two top US geographic resort areas by visitation: the Rockies and the Northeast (see Figure 3, above). Rocky Mountain resorts include four premier holdings in Colorado: Breckenridge, Vail, Keystone and Beaver Creek, which grabbed the top, second, fifth and tenth most visited resorts in the 2016-17 ski season, respectively. Park City claimed third in US visitations for the period. MTN’s three resorts in the Lake Tahoe area claimed the 11th (Heavenly Mountain) and 13th position (Northstar), while Kirkwood claims some of the best high alpine terrain in North America. International holdings include Perisher in New South Wales, Australia and Whistler/Blackcomb in British Columbia. East coast holdings include Stowe resort in Vermont. MTN’s urban ski areas include Wilmot in Wisconsin, Afton in Minnesota and Mount Brighton in Michigan.

New acquisitions include the Okemo ski areas in Vermont. The Okemo purchase brings Mount Sunapee (New Hampshire) and Crested Butte Mountain Resort in Colorado to the MTN portfolio. In a separate transaction, MTN acquired urban resort of Stevens Pass in the Cascade Mountains about 50 miles east of Seattle. All of these acquisitions will be in play for the company’s 2018-19 season. MTN resort visits came to 12,047 through the end of the company’s fiscal year in July 2017, up just over 20% YOY. Visits had reached 11,914 through the nine months ending the company’s 3rd quarter the ended in April. MTN resorts claimed just over 15% of all North American ski visits during the 2016-17 season.

Visitations drive lift tickets, while the sale of lift tickets drive another important industry metric: the effective ticket price (ETP). Through the end of 2016-17 season, the ETP hit $67.93 across MTN resorts and ski areas, up 21% since the 2012-13 season. Through the end of the company’s 3rd quarter ending in April, ETP increased to $72.19 or just over 5% YOY. The increase in ETP, about 2-times the current level of inflation, largely mirroring the growth of visitations in the ski/snowboarding market as a whole.

Differentiating the market is paramount to ETP growth and scale matters. Urban ski resorts largely pull from local communities within a 100-mile radius. These resorts are more weather dependent due to their accessibility to the surrounding community. Accordingly, overnight accommodation and dining facilities attached to the resort tend to be less developed as the demand for such services are lower. Annual ski passes are comparatively cheap with break-even thresholds in the mid-single digits when measured against pricier day passes. Online lift specials further differentiate the market, catering to down market income brackets and the indefatigable discount seekers.

Destination resorts are more able to effectively employ the full array of its service offerings into the mix—from special deals on accommodations to dining to equipment rentals to instruction—across company-owned facilities around the country and through price affiliations with full-service ski resorts around the world. Few skiers and even fewer snowboarders are likely to have the means, measured either financially or in elements of time, to fully utilize the company’s Epic pass that includes discounted pricing arrangements with 65 resorts worldwide. Yet for unlimited Epic pass priced at $899 for the season, those destination skiers living outside the driving range of the Rocky Mountains are given a tantalizing option that is competitive with a week's pass at many of the major Rocky Mountain resorts. When combined with local resorts under the same umbrella, the initial outlay compares all the more favorably, further lowering the break-even visitation threshold when compared to per day lift tickets. Discounted annual passes across the company’s resort holdings coupled with pricing arrangements with outside resorts locks loyalty with pricing discounts across all income segments which in turn applies upward price pressure on the company's ETP metric. Smart.

Of course, MTN’s annual pass packages are far from being unique in the highly competitive ski industry. MTN competes directly with the likes of Wyoming’s Jackson Hole, Colorado’s Aspen, and Copper Mountain as well as with Utah’s Snowbird, Solitude and the idyllic Alta. The mom-and-pop fragmentation of years past has long given way to economies of scale that requires enormous quantities of upfront and ongoing capital to meet skiers’ expectations around faster, high capacity and more efficient lift technology, accommodations, dining and off-the-slope entertainment. The concept amounts to total vacation planning for a very captured skiing audience.

Summer events, long the Achilles' heel of winter resorts, are now the fastest growth segment on the company’s books, albeit from low starting levels. With the passage of the Ski Area Recreational Opportunities Enhancement Act (2011), summer tourism on USDA forest lands has now opened up myriad activities from simple sightseeing to the more adventurous mountain biking, guided hiking, 4x4 Jeep tours, uber-challenging rope climbs and high-speed zip lines to the hospitality world of corporate retreat conferences to wedding venues. The cumulative revenue growth from the segment exceeds 91% since 2012 through the end of the 2016-17 season at $171.7 million. The total also exceeds that of dining revenue for the period at $150.6 million and is about to overtake revenues for ski instruction at $177.8 million in the coming year.

MTN is a strong, top-tier player in the winter resort market on its Rocky Mountain holdings alone. As the industry continues to consolidate, the relatively slow overall growth of the overall ski market will mean a bigger slice of current market share will accrue to providers with both scale and existing demand. Laying claim to five of the top ten ski destinations in the country certainly doesn't hurt. MTN already has a seat at that table.