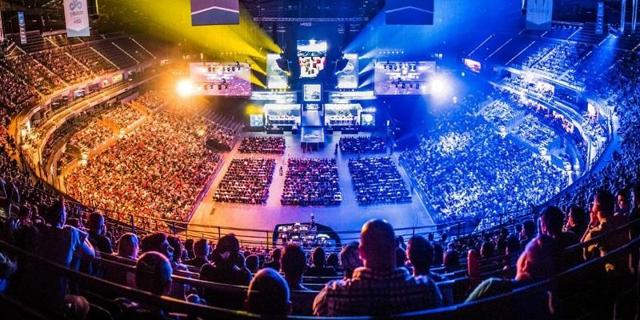 From the time video games entered homes, they have only risen in popularity among people of all ages. Video game publishers and developers will continue to see revenue increases from the growing sale of their games as well as their involvement in the competitive gaming scene. With no physical size or strength barriers to entry, video games attract a much broader and international audience than traditional sports. Revenues in the video game industry are growing at rates that would rival the revenues brought in by major professional sporting leagues within a few years.

Since their entry into the home with Pong in 1972, video games have exploded in popularity worldwide. In 2017, the industry generated $108.5bb in revenues from the sale of games, gaming video content, and accessory sales.

eSports, or Electronic Sports, are the professional side of video games. They take place all over the world and draw in viewership audiences of over 40 million. eSports is the general term to categorize all the different video games played in competition. The most popular games in the competitive scene are DOTA 2, Counter-Strike Global Offensive, and League of Legends. These three titles combined for 57% of the 2017 total eSports prize pools for a collective $69.2mm. 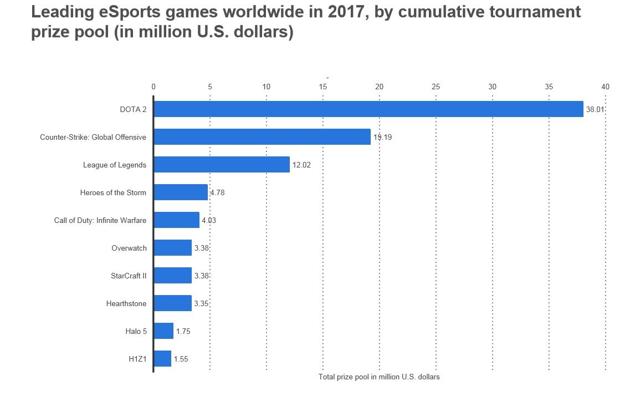 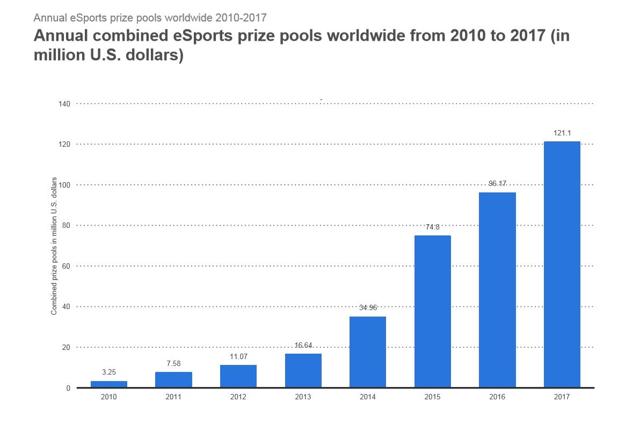 As of June 25, 2018, there have been 786 eSports competitions that have paid out a total of $47.6mm to their winners with the largest competitions still to come. Epic Games, the publisher of Fortnite has announced that they will be providing $100mm for Fortnite prize pools for the coming eSports season, and the annual DOTA 2 tournament, The International, has over $15mm in prizes lined up for a single weekend in August.

The massive prize pools in eSports are possible because of the revenue generated by the eSports industry which reached $655mm in 2017. Newzoo projects eSports revenues to grow 38% in 2018 to $906mm thanks to investments in branding for the overall eSports community as well as individual companies ranging from peripheral accessories to energy drinks. 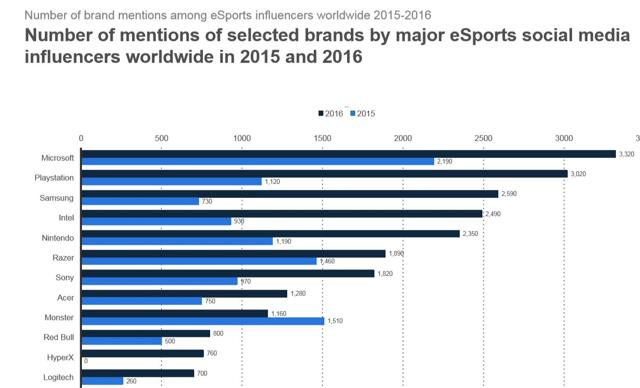 Second-year NFL Wide Receiver for the Pittsburgh Steelers, JuJu Smith-Schuster, just signed a six-figure endorsement deal with lesser-known peripheral accessory retailer HyperX, a division of Kingston Technology, to wear their product when he creates content for Twitch.tv and YouTube. Smith-Schuster is one of many well-known celebrities that stream their gaming experiences online to an audience of avid eSports fans.

Live streaming is a relatively new form of entertainment where people have the ability to live broadcast whatever they are doing to a viewing audience. While many may know about live streaming from Facebook's (FB) Facebook Live, the fastest growing online streaming company is Twitch.tv. Twitch.tv is a streaming platform that has cornered the video game and eSports market. Twitch viewers spent over 355 Billion (with a B) minutes watching content on the website in 2017 or 246,527,778 days. This is a 393% increase from 2012 viewership which topped out at 72 billion minutes of content watched. Though Twitch does not disclose its revenue, it does let the public know that over 20,000 partnered streamers and 150,000 streamers earning money from the content they release on the site and from tips their viewers give to them. 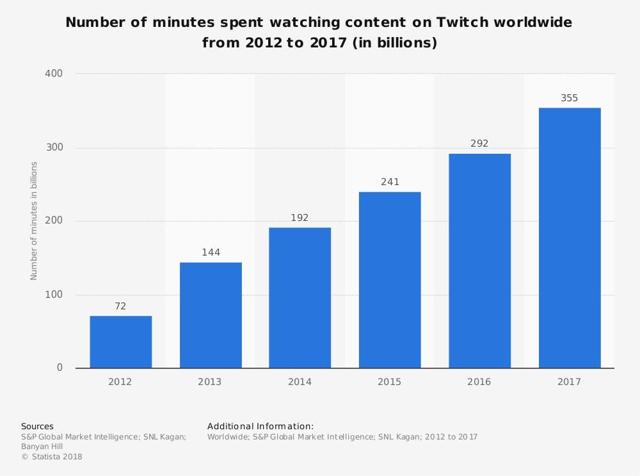 eSports have been wildly popular in Asia for years but are just beginning to attract the attention of American audiences. 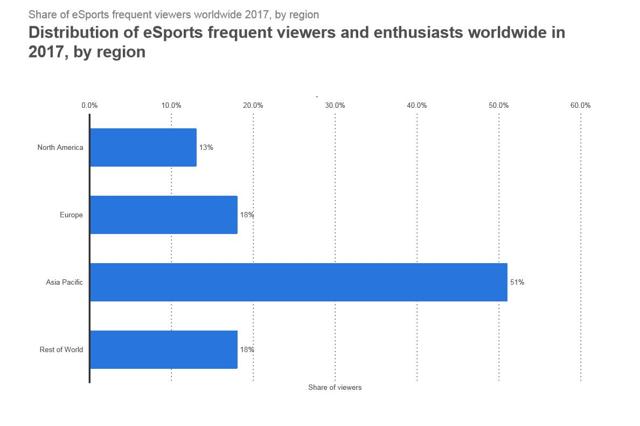 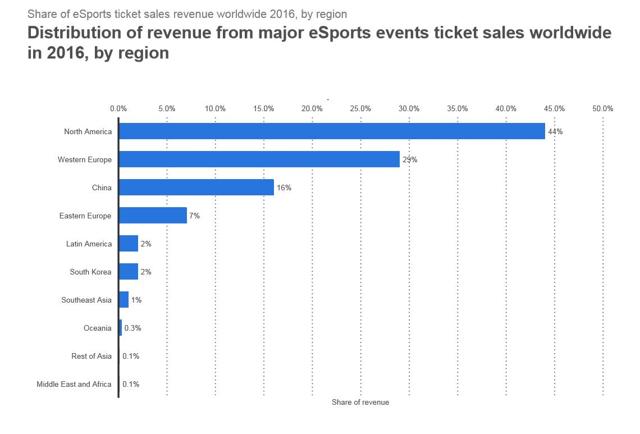 The demand for eSports in the United States cannot be understated, and with eSports being projected to produce nearly $1bb in revenues this year, the opportunity that persists is wide.

A new addition to the eSports world is Activision Blizzard's (ATVI) Overwatch League, which was launched this year with an initial 12 teams up for sale at $20mm a piece. The teams were quickly bought up and delivered $240mm in revenue. Activision has announced they plan to grow the league to 28 teams in the near future, which would bring in an additional $480-960mm in team purchases alone as sources close to Activision expect the prices to be as high as $60mm a team.

Whether you're a fan of video games or not, if you are an investor looking for new opportunities you cannot avoid the world of eSports. With a massive worldwide appeal, exponential growth in viewership, and near billion-dollar revenues eSports offer a vast variety of options to gain exposure. Game developers like Activision and Nintendo (OTCPK:NTDOY) will likely experience the highest return in eSports as they will retain the competition rights to their games and be able to sell competitive teams worldwide as well as collect on revenues from the sale of their games and additional downloadable content. Having an audience of hundreds of millions that can generate a billion dollars in revenue annually is typically unheard of in a sector so few investors follow. With the growth potential of eSports and the video game industry relative to its current size and age, opens the doors for investors to still get in early and ride along as eSports continue climbing in popularity to rival traditional sports.

Deltabot Capital
930 Followers
*Blake welcomes any incoming connections: https://www.linkedin.com/in/blakedan97/ Deltabot Capital is composed of four current University of Denver students utilizing automated trading systems among a variety of traditional and digital assets. The firm's analysis is completed by Blake Danielson and Connor Martin, both undergraduate Finance majors in Daniels College of Business. Blake and Connor each bring a unique set of skills to the table with regard to equity research and analysis. Recently they have both competed and placed 2nd in the Rocky Mountain Investment Challenge and began working with the University's $1.4mm "Marsico Fund" graduate-level equity portfolio. Blake was also recently voted Portfolio Manager of DU's graduate-level Marsico Fund as an undergraduate. Blake Danielson looks to identify young under-appreciated value in emerging markets. Primarily covering the Cannabis and Early Threat Detection industries, Blake strives to find short-term opportunities in market inefficiencies and long-term value in companies positioning themselves as the expert in their respective sector. Connor Martin seeks to avoid the market noise and focus on deep value plays arising in a multitude of industries based on firm-level and macroeconomic catalysts. He also strives to provide investors with breakdowns of complex industries to foster understanding and value for the reader. The industries he currently covers include Cannabis, Aerospace & Defense, Early Threat Detection Systems and Technology.
Follow