There was a buzz created in the corner of the Twittersphere where I hang out about a filing for the Amplify BlackSwan Growth & Treasury Core ETF with the proposed symbol SWAN. Part of the idea behind the strategy is that:

The Index endeavors to provide investment returns that correspond to those of the S&P 500 Index, while mitigating against significant losses. One portion of the Index is a portfolio of U.S. Treasury securities and the other is a portfolio of LEAP Options on SPY.

The fund will allocate 90% to treasuries and the other 10% to LEAPs. Where it talks about trying to mitigate big losses you might think it would be buying put options but it won't it will be buying calls. I jumped into the conversation a little bit saying that this seems like a form of leverage, a form of leverage I have written about many times.

I think the bet with SWAN is that with only 10% exposed to risk assets and the other 90% earning at least 2% in treasuries (90% of assets yearning 2% delivers 180 basis points to the portfolio) then all that is at risk is actually 8.2% of the portfolio if the LEAPs were ever allowed to expire worthless. The treasury exposure will actually be a ladder that targets a ten year duration which seems odd, why take interest rate risk?

The LEAPs chosen will be in the money and will target a delta of 70 (the options should move $0.70 for each $1.00 move in the underlying). There is a reconstitution cycle to the strategy for replacing options but there are scenarios where replacing options could result in a sort of contango because while when purchased an option may have a delta of 0.70, that same option probably won't have a delta of 0.70 when it needs to be swapped for an option with a delta of 0.70. They may have to use over the counter options which might end up being more expensive if the fund doesn't become huge.

There might be other relevant risks, there was a long list in the prospectus but in some instances, it was not easy to discern boiler plate warnings from actual risks.

Relying on Yahoo Finance which does not provide deltas and not being sure how deep in the money you would need to go for a delta of 0.70 I'll go fairly deep for September 2019. With SPY at $270 a call struck at $240 would equate to $240,000 (options multiplier is usually 100) of equity exposure and the offer at the close on Thursday was $42.70 so at that price the time premium is $12.70. If you have exactly $240,000 in your account and you buy this option then it would be like having a fully equitized portfolio but it only cost 1.8% of your portfolio to equitize, remember SWAN will be 90% treasuries and 10% SPY LEAPs. My guess at how deep you'd need to go to find a delta of 0.70 could be way off but if you are interested in the fund, take the time to look and make sure the fund is not over equitized (a $10 million fund with a notional value of $20 million in equity exposure as an example).

Where Nassim Taleb comes into play is the name of the fund Black Swan, that term is regularly associated with him. In his book Black Swan, Taleb proposed the following idea for a "barbell strategy" via a Tweet from David Foulke; 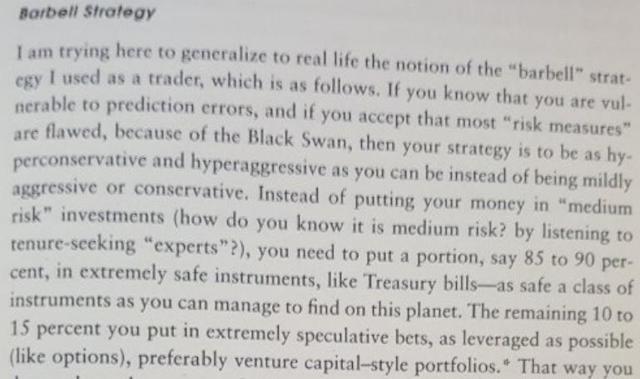 I've written about this many times as I find fascinating even if not practical to implement for clients. Is SWAN in fact a version of this? It seems plausible.

If someone had interest in this and wanted to put 10% of their money into "extremely speculative bets, as leveraged as possible," then it might make sense to instead look at 3X levered ETFs. There is some measure of optionality embedded in 3X leverage.

ETF.com's screener shows 43 3X funds (includes long and short). One advantage that 3X funds have over options is that they don't expire, another one is there is no issue of time premium erosion to deal with. I don't really have an interest in 3X funds and I don't really want to use LEAPs as a stock replacement strategy, but someone interested in one of these might very well be interested in the other.

Obviously, someone wouldn't simply pick the most volatile 3X ETF or two, they would need to have some reasonable basis to believe the sector or niche was going to go the way they were investing. There is at least one 3X FANG ETF to buy it you'd have to believe it was going to go up otherwise it would just be like playing roulette.

Back to the proposed SWAN ETF, taking one more Talebism, it won't create antifragility; you won't benefit if the market goes down (some funds do offer this). Long treasuries and long calls might mean you go down less but even then depending on how they actually implement the options maybe not. And again, taking interest rate risk seems unnecessary; two year T-bills are around 2.5% which is arguably sufficient in the context of the fund's strategy.

Until proven wrong, I think I could argue it is actually levered long exposure. There are mutual funds that put a little bit in equity futures and the rest in treasuries with the objective of capturing equity market beta plus the yield. Thinking of it that way might make more sense, we'll see if/when it lists.

Roger Nusbaum
86.19K Followers
Roger Nusbaum is the ETF Strategist for AdvisorShares. This Arizona-based professional has over 25 years of industry experience. He is also a well-known financial commentator covering ETFs, retirement planning and portfolio management for AlphaBaskets.com and at TheStreet.com. We think Roger is particularly insightful on exchange-traded funds, risk management and investing in international markets. Visit Roger's work at TheMaven (https://www.themaven.net/etf/) and AlphaBaskets (http://alphabaskets.com)
Follow