Um, no. Central banks not enthusiastic about the renminbi.

This is clear from the IMF's just released "Currency Composition of Official Foreign Exchange Reserves" (COFER) data for the first quarter 2018. The IMF is very stingy with what it discloses. The COFER data for each individual country - each country's specific holdings of reserve currencies - is "strictly confidential." But it does disclose the global allocation of each major currency.

In Q1 2018, total global foreign exchange reserves, including all currencies, rose 6.3% year-over-year, or by $878 billion, to $11.59 trillion, within the upper range of the past three years (from $10.7 trillion in Q4 2016 to $11.8 trillion in Q3 2014). For reporting purposes, the IMF converts all currency balances into US dollars. This data was for Q1. The dollar bottomed out in the middle of the quarter and has since been rising.

US-dollar-denominated assets among foreign exchange reserves continued to dominate in Q1 at $6.5 trillion, or 62.5% of "allocated" reserves (more on this "allocated" in a moment).

Over the decades, there have been major efforts to undermine the dollar's hegemony as a global reserve currency, which it has maintained since World War II. The creation of the euro was the most successful such effort. The plan was that the euro would eventually reach "parity" with the dollar on the hegemony scale. Before the euro, global exchange reserves included the individual currencies of today's Eurozone members, particularly the Deutsche mark. After the euro came about, it replaced all those. And its share edged up for a while until the euro debt crisis spooked central banks and derailed those dreams.

And now there are efforts underway to elevate the Chinese renminbi to a global reserve currency. This became official on October 1, 2016, when the IMF added it to its currency basket, the Special Drawing Rights. But watching grass grow is breathtakingly exciting compared to watching the RMB gain status as a reserve currency.

The RMB is the thin red sliver in the pie chart below with a share of just 1.39% of allocated foreign exchange reserves. Minuscule as it is, it is the highest share ever, up from 1.2% in Q4 2017. In other words, its inclusion in the SDR basket hasn't exactly performed miracles as central banks seem to remain leery of it and have not yet displayed any kind of eagerness to hold RMB-denominated assets.

The Swiss franc, with a share of 0.2% of allocated reserves is the barely visible black line in the pie chart above.

Note the term "allocated" reserves. Not all central banks disclose to the IMF how their overall foreign exchange reserves are allocated by specific currency. But over the years, more and more central banks have disclosed their holdings to the IMF, and the mystery portion has been shrinking. Back in Q4 2014, unallocated reserves - the undisclosed mystery portion - accounted for 41% of total reserves. In Q1, only 10.3% of the reserves remained undisclosed. So the COFER data is getting more complete.

The chart below shows how the share of various reserve currencies has changed since 2014. The black line with markers, way at the top, is the hegemonic US dollar, whose share has edged down a tiny bit. The euro (blue line) vacillates at around 20%. The dollar and euro combined accounted for 82.9% of the allocated foreign exchange reserves in Q1, unchanged from the prior quarter. Each of the rest of the currencies is inconsequential. The Chinese RMB - which is supposed pull the rug out from under the dollar - is the bright red line at the very bottom, just above the Swiss franc: 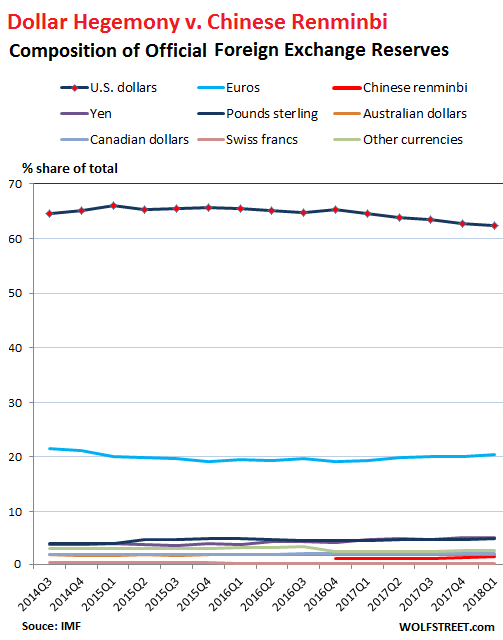 So folks who've been eagerly anticipating "the death of the dollar" or similar scenarios will have to be very patient.

Since 1965, the dollar's share has fluctuated sharply, and the current share of 62.5% remains in the middle of the range. The chart below shows the dollar's share at year-end for each of the past 52 years, plus for Q1 2018. Note its low point in 1991 with a share of 46%. And note that the Financial Crisis made no visible dent: 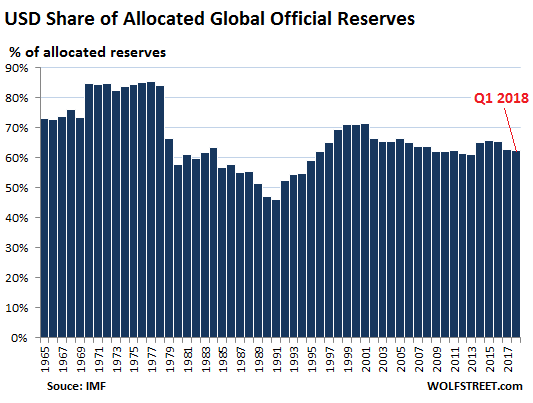 However, having the largest reserve currency does allow the US to run a huge trade deficit, at least for a while, though the major cause of it - offshoring production by US companies - has a long-term deleterious impact on the US economy.

After decades of relentless offshoring, the equation may change for automakers and component makers. Read… Beyond the Hysteria about Auto Tariffmageddon

Wolf Richter
3.99K Followers
Wolf Richter is the publisher of wolfstreet.com, a site focused on business, finance, and money. The site is free. In addition to the many years at wolfstreet.com and its predecessor site, he has 20 years of C-level operations and finance experience.
Follow
5 Comments
To ensure this doesn’t happen in the future, please enable Javascript and cookies in your browser.
Is this happening to you frequently? Please report it on our feedback forum.
If you have an ad-blocker enabled you may be blocked from proceeding. Please disable your ad-blocker and refresh.