"But as we cannot predict such external influences very well, the only reliable crystal ball is a probabilistic one." - Benoit Mandelbrot

C-J is a Monte Carlo simulation model used to assess risk in the S&P 500. Traditional stock market models suffer from a number of problems including fat tails, serial correlation, and the failure to account for volatility clustering. The fat-tail problem arises because traditional finance theory uses the normal distribution. For investors, the practical implication of such an approach to explain movements in the stock market is that traditional portfolio theory underestimates (and in some cases significantly underestimates) risk in the market.

C-J uses data on valuation, earnings, and short-term historical patterns in the stock to correct for the problems noted above. C-J does this by using a series of non-normal conditional distributions. If you have read former Yale mathematician Benoit Mandelbrot's book (with Richard Hudson), The (Mis)behavior of Markets: A Fractal View of Financial Turbulence, then you should note that C-J is fractal by design. And while the model maintains a fractal nature, because of its design, it also maintains statistical properties similar to the behavior of the S&P 500 over the last 60+ years.

The purpose of C-J is not to provide a single point estimate of where the S&P 500 will be at some future point. As investors we don't see the process generating movements in the market, we only see the outcomes, thus explaining why "expert" predictions are often wrong. As Nassim Taleb has written in Black Swan: "Most models, of course, attempt to be precisely predictive, and not just descriptive in nature. I find this infuriating". To that end, C-J is intended to be descriptive in nature by providing not only a model that corrects for the problems discussed above but also does so in a probabilistic manner.

Despite those results, the daily fluctuations in the S&P 500 still leave me with a rather unsettling feeling. When the market has been rising, I find myself wondering if a new closing high is at hand. And when the S&P is in decline, I can't help wondering if a correction (or worse) is at hand. Plenty of market experts, both here on Seeking Alpha and on other sources, have given forecasts of either a new record high, a correction, or even a bear market in the near future. But alas, the S&P 500, which hit a record closing high of 2,872.87 on January 26, and a year-to-date closing low of 2,581.00 shortly thereafter on February 8, remains within that range despite all the market happenings. With so many reasons for the market to move, and so many diverse expert forecasts about the direction and magnitude of such a movement, I'm not sure if I'm confused or simply exhausted. Either way, with the exception of a few intraday movements, the market has now been fluctuating within the range noted above for over 4½ months.

So with all that in mind, I had C-J take a look at July. The results are shown below: 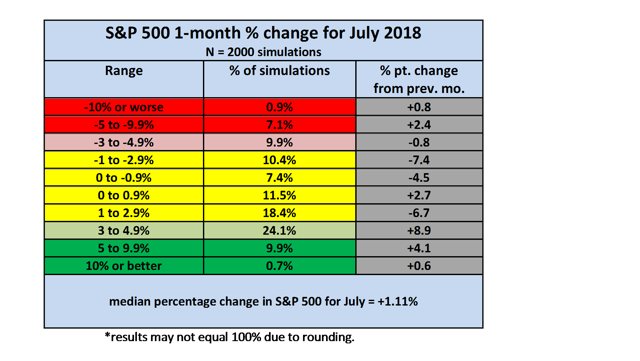 A few points are worth noting. First, as can be seen from the column on the right, there has been a noticeable increase in the likelihood of a tail event either positive or negative. In the case of a decrease of 5% or more, that likelihood is now estimated at 8%, a move which would take the S&P 500 to 2,582.45 or lower, a level near the lower end of the range I noted above. In contrast, C-J estimates a 10.6% chance the S&P 500 will increase by 5% or more, a move that would take the index to at least 2,854.29, a level just shy of the all-time closing high. Looked at with an eye toward the trading range, C-J estimates a 16.1% chance July will end outside of the range it has been in for the last 4½ months. Specifically, C-J estimates an 8.5% chance July will end with the S&P 500 Index above 2,872.87 and a 7.6% chance it will end below 2,581.

Second, the median simulation for July suggests an increase in the S&P 500 of 1.11%. Such a move would result in the index ending July at 2,748.54. Furthermore, the simulation results suggest a 64.4% chance the S&P 500 will increase in July. That is above the historical average going back to 1950.

This table simply provides a more detailed breakout of the reduction in negative tail risk noted earlier in this article. In particular, we see an increase in each of the negative tail ranges, particularly in the -9% to -11.74% range. You will note that while the estimated likelihood of a decline of 5% or more is below both the historical average and the likelihood associated with traditional finance theory, the likelihood of a decline of 9% or more is estimated to be greater than that witnessed historically or implied by finance theory.

Disclaimer: This article contains model-based projections that are forward-looking and, as with any quantitative model, are subject to uncertainties and modeling assumptions. The C-J model is intended as a tool to assess risk in the S&P 500, and not as a forecast of the future value of the S&P 500 or any other market. The results of C-J are for informational purposes only. Nothing in this article should be construed as specific investment advice.

Kevin Jacques
1.5K Followers
Kevin T. Jacques is a former senior economist with the U.S. Treasury Department in Washington, D.C. During his 14 years with the Treasury Department, he worked on topics including risk measurement and management systems, bank capital regulations, and systemic risk. In the mid-1990's, he served as staff on the President's Working Group in Financial Markets examining systemic risk in the U.S. financial system. In addition, during his time in Washington, Dr. Jacques taught finance in the McDonough School of Business at Georgetown University. Dr. Jacques’ economic and financial commentaries have received hundreds of radio, television and newspaper citations including Bloomberg Financial News, National Public Radio (NPR), PBS television, American Banker, U.S. News & World Report, and others. Currently, he teaches investments at Baldwin Wallace University. He holds a Ph.D. in Economics from Michigan State University.
Follow