Here is a summary of the results I will describe in this report.

Since my last report on the Williston Basin group, OAS announced the sale of non-strategic acreage. OAS is selling 65,000 acres for $283 million. Production from this acreage is 4,400 BOE per day. Applying a market metric of $40,000 per BOE of daily production, $176 million of the sale price can be attributed to the current production. Thus, OAS received $1,646 per acre for whatever future drilling locations are on the acreage. My model assigned zero value to this acreage since I assumed it would not be drilled. I have adjusted OAS’s production and balance sheet to take into account this asset sale.

The group’s share performance has been quite strong since my prior report. WLL is up 30.7%, OAS is up 20.1% and NOG is up 89.8%. The group has benefitted from a market sentiment change away from Permian Basin E&Ps toward Eagle Ford shale and Williston Basin E&Ps. Permian E&Ps are receiving large price discounts for their oil due to pipeline takeaway congestion, where Eagle Ford and Williston E&Ps do not face this issue. Also, from a technical standpoint, WLL and OAS are two of the highest weighted E&Ps in the XOP ETF, which I believe has created material incremental demand for the shares. NOG’s management changes and balance sheet restructuring have enabled the market to look at its assets and profitability through a clearer lens, removing any bankruptcy fears. Also, NOG was recently added to the Russell 2000 which creates material incremental demand for the shares.

Regarding the specific companies and my investment views, in my prior report I stated WLL, OAS and NOG were all undervalued. With the increase in the share prices, OAS and NOG are closer to fair value, but WLL is still undervalued.

At the time of my last report, I had no positions in any of the companies in the group. Subsequent to issuing the report, I bought WLL and NOG. Currently, I am still long WLL and NOG. 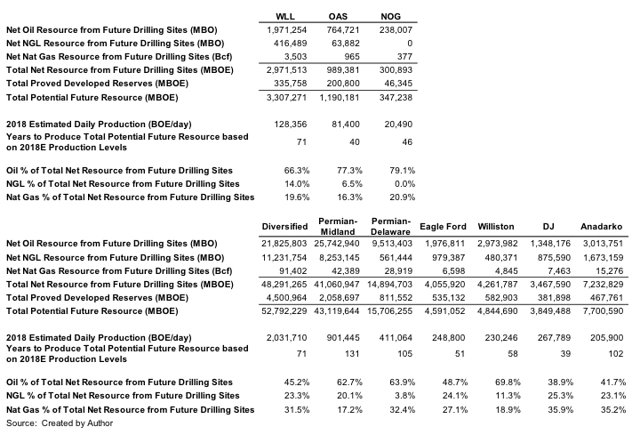 There are no material changes to the information in the above table.

By changing my assumption for NGL prices, all companies’ D&C Costs per Adjusted BOE were slightly impacted. Otherwise there were no material changes to the above information since my last report.

Chart 3 below shows EBITDA excluding hedging per BOE for each company and the various geographies for the past four historical quarters and my 2018 full year estimate. 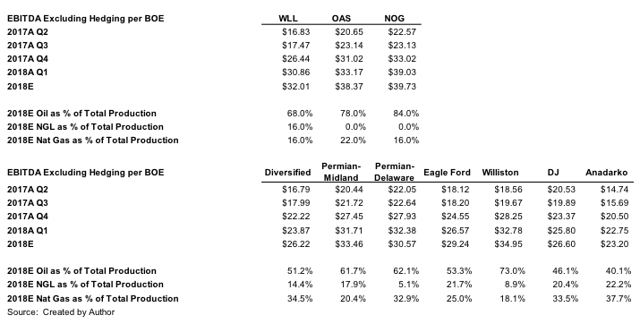 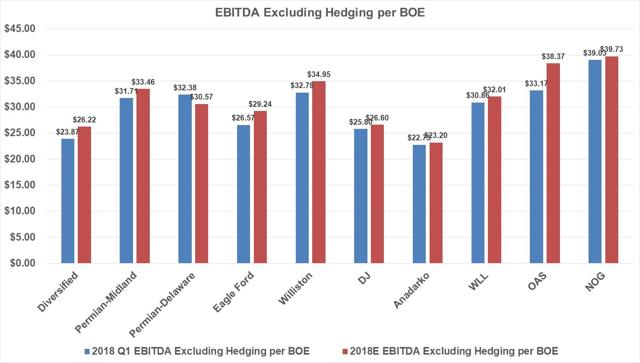 Williston Basin production is heavily weighted to oil. Also, needed Williston Basin pipeline capacity finally came online in 2017 leading to reductions in basis differentials. Together, these factors have made Williston Basin E&Ps very profitable. NOG is now generating some of the highest EBITDA per BOE among all the US shale E&Ps I follow. NOG’s EBITDA per BOE increased by about $6 in 2018 Q1 versus 2017 Q4. OAS also generates very high EBITDA per BOE, increasing $2 in 2018 Q1 versus 2017 Q4. WLL’s profitability is behind NOG’s and OAS’s primarily because of WLL’s Niobrara shale production (which WLL wants to divest).

In February, OAS closed on its Permian Basin – Delaware Basin acquisition. Production in 2018 is expected to be around 4,000 BOE per day, compared to around 77,000 BOE per day from the Williston Basin. Since the last report. I am now assuming $12.50 in Permian basis differential for 2018. I do not believe OAS has hedged basis for any of its Permian production, but given the relative size of Permian production, this assumption has no material impact on 2018 EBITDA. As we move into 2019, when OAS expects Permian production of around 7,500 BOE per day, it is still not material and 2019 2H basis is projected to decline to $1 to $2 as new pipelines come online.

Chart 4 below shows the equity value and enterprise value for each E&P and various geographies. 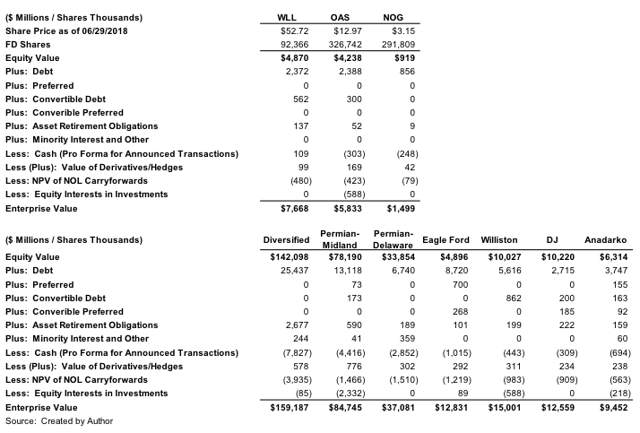 Chart 5 below shows the two calculations to value future drilling sites for each E&P and the various geographies.

Of the two analyses, I place more weight on EV Less PV-10 since the reservoir engineers calculating PV-10 have significantly more detailed information than I do. The changes since the last report are due primarily to changes in equity values (i.e., share price). Where the Williston Basin group used to be undervalued on a NAV basis, now OAS and NOG are fairly valued to borderline overvalued. WLL is fairly valued to somewhat undervalued.

Chart 6 provides the production growth rate assumptions for the E&Ps and various geographies.

There are no material changes since the last report other than NOG’s 2018 production increased to reflect a recent acquisition.

Chart 8 provides leverage and free cash flow metrics for the E&Ps and the various geographies.

There were no material changes from the last report other than for NOG a bit lower leverage ratios and better cash flow ratios resulting from additional debt for equity exchanges.

Chart 10 provides price realizations by commodity during Q1 2018 for the group.

Nat gas realizations are not material to profitability. But, for those of you interested, WLL had weak price realizations at a $1.20 discount to the benchmark Henry Hub price.

Since my last report, there have not been any material changes to assumptions. Sentiment on the Williston Basin E&Ps has increased materially as sentiment on the Permian Basin has soured materially. I believe money flowing into the ETF XOP has created incremental demand for WLL’s and OAS’s shares. NOG’s addition to the Russell 2000 has created incremental demand for its shares. Increasing oil prices also benefit sentiment toward the Williston Basin E&Ps given the high weighting of production to oil and the reduction of past pipeline takeaway issues. As a result, the group’s share prices have increased materially in the two months since my last report. While not as undervalued as they used to be, WLL is still undervalued and OAS and NOG are now about fairly valued.

Andre Kovensky
365 Followers
Andre Kovensky is the founder and President of Octavia Investments LLC. Previously, he was the COO and CFO of PGM Holdings (TSE:2466), a publicly traded owner and operator of golf courses in Japan. He also spent three years leading corporate buyouts for Lone Star Funds in Tokyo, as well as 10 years as an investment banker, the majority of which with Citigroup based in the San Francisco Bay Area focused on technology companies. Andre received his MBA from UCLA's Anderson School of Management and a BA in the Humanities from the University of Texas at Austin.
Follow

Disclosure: I am/we are long NOG, WLL. I wrote this article myself, and it expresses my own opinions. I am not receiving compensation for it (other than from Seeking Alpha). I have no business relationship with any company whose stock is mentioned in this article.