Editor's note: Seeking Alpha is proud to welcome Khalid Howladar as a new contributor. It's easy to become a Seeking Alpha contributor and earn money for your best investment ideas. Active contributors also get free access to the SA PRO archive. Click here to find out more »

The bank bail-in mechanism introduced by Basel III, coupled with the more recent EU's Bank Recovery and Resolution Directive from January 2016 applies losses to shareholders, junior and possibly senior debt instruments should the bank reach a perceived "point of non-viability" and/or is "failing or likely to fail."

In addition to providing new forms of risk-adjusted capital, such Basel 3, compliant debt instruments in theory (and now practice) reduce systemic risk and preclude state-driven bail-outs. This saves tax-payers money and is ultimately more politically acceptable to the citizenry.

On June 6, the EU's single resolution board - authorized to resolve failing banks - declared that BP was "failing or likely to fail" due to a legacy property related loan impairments and a record loss of €3.5bn for 2016 that continued to impact confidence with an estimated €2bn of deposit flight per day before the declaration.

As designed, no public money was used to boost capital or provide "bad loan" guarantees. Crucial for unfortunate junior debt investors, was that the bail-in losses were applied outside a bankruptcy court or court-administered liquidation - a key feature of the resolution process. Indeed, the lack of differentiation in the junior parts of the capital structure has caused some controversy, driving possible challenges from aggrieved junior bondholders

In Italy's case, the single resolution board deemed that the two banks in question - Banca Popolare di Vicenza and Veneto Banca (OTC:VENBF) (or Veneto banks) were not systemically important for the eurozone and hence passed authority for their resolution to the national regulator who applied 2013 EU state aid guidelines (now perhaps outdated).

As such, unlike BP, the good assets were sold to Intesa Sanpaolo (OTCPK:IITOF) for a token €1, the government also injected €5.2bn cash with €12bn in loan guarantees to ensure Intesa's capital and dividends remained unaffected.

Some of these support amounts will be ultimately offset with the government's senior claims on the remaining liquidated asset value. Junior bondholders are effectively equitized and ultimate losses for them and the shareholders (both banks are private) will not be known for some time. But, unlike BP, there is a prospect for non-zero recoveries.

Conscious of some of persistent structural challenges and the complexities of government-related lending, regional regulators have typically taken a more conservative and brute force approach to financial system stability by generally demanding higher base levels of capital at the 12% level - even before Basel 3's introduction. Total capital is typically in the strong 15-18% range.

During the high growth of prior years, the strong capital levels were supported through an increasing proportion of capital boosting AT1 and T2 (chart 1) issuances almost touching $5Bn in 2016 (see below). While the growth pressure has now slowed, profitability and capital pressures from impairments and provisions are expected to rise. 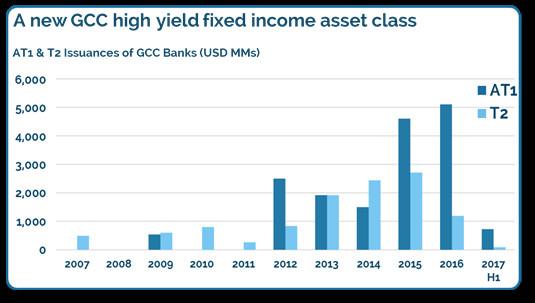 Despite the broad implementation of Basel 3 by 2018, the supportive banking environment of the Gulf Cooperation Council (now fragmenting) is still a world away from that of Europe. As such, there are two key drivers that would likely reduce the willingness of local regulators to trigger bail-in mechanisms incorporated into local AT1 and Tier 2 debt and thus making much of the local junior bank debt less risky than the European variety, in our opinion. Indeed, I would invest if I could get some allocation!

As democracies, the European and U.S. politicians are ultimately beholden to their tax-paying populations and therein lies the first major difference with the GCC. Much of the political and social backlash against European banks post-GFC and subsequent regulation relates to the extraordinary amounts of tax-payer funds used to bail out "greedy bankers" coupled with the negative sentiments around increasing inequality and populism.

In the GCC, despite the expected introduction of VAT in 2018, there is no direct taxation and no hence transfer of wealth from "poor" to "rich" upon a bail-out. Despite oil-price pressures citizens (still) enjoy a relatively wide array of social benefits. preferences and employment opportunities that are rare elsewhere.

Finally, as monarchies, the hard decisions, accountability, costs and perceptions surrounding bank bail-outs are less controversial and easier to manage. Indeed, the feelings of the general population around support are broadly irrelevant, making the final decision to support a bank much simpler for the regulatory authorities.

Actually, It's All the Government's Money Anyway

Unlike Europe and the U.S., where the authorities are reluctant to hold on to banking stakes, GCC governments and their associated wealth and pension funds are very comfortable with sizable levels of bank ownership, some of which was acquired through past bail-outs. Of the top 50 GCC banks by assets, over 80% have some shareholding from the government. In this loose definition, we include sovereign investment vehicles and wealth funds, state pension and social funds (typically wholly owned by a government agency or ministry).

It is assumed that in any bail-in situation the equity holders (like BP) would be wiped out before hitting the AT1s and then T2s that are higher in the capital structure. Senior debt bail-in is extremely unlikely given absence of any local resolution regimes. Saudi had made moves to introduce one, but this has stalled in light of pressing domestic challenges.

As a shareholder, the commercial incentive for government support is strong - based on crude average, the government would need to write-down its own $600mm equity holding to zero before recouping $300mm from bondholders. Indeed, for such banks, the point where equity value equals junior debt outstanding may prove to be a step up in bail-in probability. The rationale holds true for larger debt/sukuk issuances as these banks typically have larger state shareholdings. 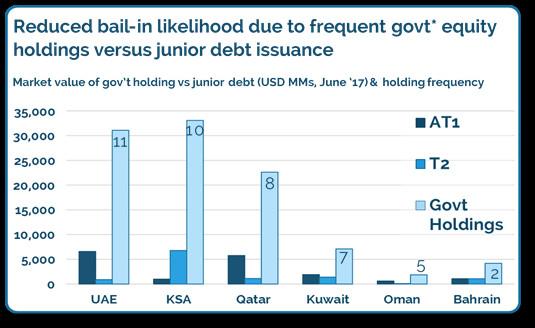 More generally, rather than seek a market solution (with the associated bail-in) the government would be incentivized to support the value of its own equity holding. Especially as the funds used would be government's (and not tax payers) money anyway, and even with oil-price pressures these are not the heavily indebted European sovereigns. Often their net asset position is positive although liquidity position is unclear.

Also, an additional consideration is who holds the bonds/sukuk? Recognizing the risk dynamics above couple with attractive yields, much of the allocation goes towards some of sovereign/pension funds described above. Providing yet another incentive not to write down the bonds/sukuk.

During the GFC, government support for the banking sector was common with various liquidity measures and capital injections applied across the region. This behavior has been common over the last four decades for which we have looked back and drives a high level of support (often 2-4 notches) from all three main credit rating agencies for senior unsecured debt.

With regard to junior debt ratings, the BP bail-in validates the approach taken by the agencies that zero support should be imputed in their ratings in Europe, although the Veneto bail-out has now perhaps undermined this absolutist thinking - politics and social impact are still clearly considerations and the 2013 guidelines provide a loophole for state aid.

This approach is replicated in the GCC where junior debt ratings are anchored on the bank's unsupported, standalone ratings and then notched down. This puts most instruments squarely in the sub-investment grade range, although Moody's still incorporates some minimal support into some of its junior ratings. Given the GRE status of some banks there is also scope to incorporate junior debt support for Standard & Poor's if they believe support could be extended downwards. Finally, Fitch also notes that support for junior instruments less likely. However, with limited rated issuance very few examples exist to set any precedence.

Indeed, Post Basel 3, rated GCC subordinated debt is now rare, given that seemingly no rating is better than a very low rating. Those investors comfortable with such deeply subordinated risk in a dynamic regulatory environment are likely very sophisticated and less reliant on ratings overall.

It is worth noting that rating agency support assumptions (for both senior and junior) are under regular reassessment given the weakening credit fundamentals of the region and have already evolved from the period of $100 oil with a more discriminatory approach to rating support for some agencies.

In the GCC, one can see the incentives and credit-risk dynamics are different to the EU. The government footprint remains large in the banking system - from the equity into both the asset and liability sides of the balance sheet (government and related entity exposures can range from around 10-30%). Under such circumstances bailing-in liability holders is less straightforward.

Regional regulators will continue to look for additional tools that help moderate the potential moral hazard fostered by such a supportive environment although high capital levels seem to be the lever of choice and have served the region well, with even higher levels on the way.

Khalid Howladar
2 Followers
A specialised credit, rating and sukuk advisor focussed on Gulf marketsIn this challenging and dynamic credit environment, investors, borrowers, corporates and public sector entities can apply our unique knowledge and unmatched credit experience to maintain or improve their credit risk profile with the markets, credit rating agencies, institutional investors, national regulators and shareholders. These same skills can support asset managers, central banks and regulatory bodies to better evaluate and potentially supervise the risks associated with such entities and markets, as well as in the formulation of new policies and regulation. For the stakeholders in the new and fast-growing Islamic finance markets, Acreditus can apply its global expertise to help support their strategic aspirations by highlighting potential challenges and opportunities in this immature and developing sector.
Follow