Netflix is a fairly simple business, one even a novice investor can understand in concept. Being a simple business does not make it simple to analyze. Given the relative insignificance of Netflix's historical DVD streaming business, Netflix's entire business is effectively its online streaming service which has about 56.7mm subscribers domestically and 68.3mm subscribers internationally, for a total global subscriber base of 125mm. If it hadn't been for a bold, successful bet by Reed Hastings (founder & CEO) on launching an online streaming service, Netflix likely would have gone the way of Blockbuster. The Netflix management team has demonstrated incredible ingenuity and resolve in taking a nascent mail order DVD service and building it into a media powerhouse and force to be reckoned with by all the major studios and entertainment businesses. This success has been rewarded by Wall Street, as Netflix stock is up over 16x since 2013, having appreciated by ~100% in 2018 alone. The question investors must ask now is: everyone knows Netflix is a good business, but how much is already priced in? Said differently, it's widely known Netflix has achieved tremendous success; how much of that is already reflected in the current valuation and does that leave any room for further upside? 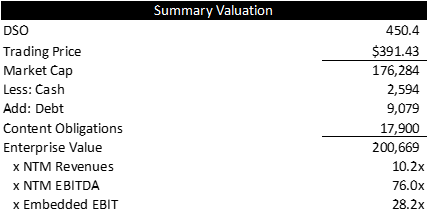 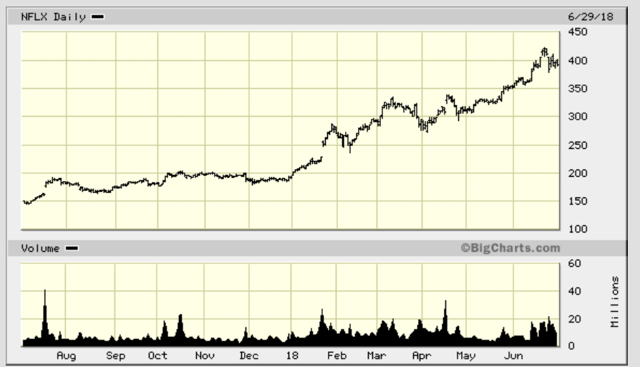 Capital in the Information Age:

When Ben Graham first developed the principles that underly modern value investing, businesses were simpler to analyze in many respects - most companies were in "hard goods" industries where they invested capital in factories and other physical assets and produced physical products they sold at some margin. Today, many of the largest companies do not own much physical assets; that does not mean, however, that they do not invest in capital - they just invest in a different form of capital. For example, Google invests money in human man hours which are used to produce innovative products and features for the Google Suite of services - this is evidenced by the famous 20% rule where Google allows employees to devote 20% of their time to projects of interest to them - these projects may not produce immediate returns, but they are akin to research and development expenditures. Similarly, Netflix owns very little in the way of physical assets, but that does not mean it is not a capital intensive business. Netflix invests billions of dollars annually in digital content - this content helps deliver enough value to maintain current subscribers and helps convince new subscribers to join the service. As of year-end 2017, Netflix had invested over $36 billion in content spending. The key question for an investor analyzing Netflix is how should you treat Netflix's spending on content. It clearly has some lifetime value as movies and shows still maintain value over time - old movies and shows tend to be less valuable than the hits of the day, but there are plenty of situations where old series actually become more popular long after they have ended - this was the case with Seinfeld and Friends - Netflix was able to popularize these shows among a generation of millennials that didn't necessarily grow up watching those shows. GAAP accounting is not well suited to Netflix's business model - this is because Netflix is forced to decide how to amortize its content assets each year. This is naturally a highly imperfect estimate, and Netflix's current approach is fairly conservative as they only assume a useful life of about 10 years, on an accelerated basis. The ideal framework to analyze Netflix is to think about its profitability on a given cohort of subscribers relative to the cost to add those subscribers. The problem is there is no way to know what specific shows or movies drove a given customer to subscribe to Netflix - you also don't know what shows or movies provide the minimum level of value necessary to keep a current subscriber from cancelling. Nevertheless, it is possible to analyze different cohorts of Netflix's subscriber base to get a sense for whether the company earns attractive returns on the capital it deploys into content.

The tables that follow are cohort analyses for Netflix for 2016 and 2017 as well as cumulative since inception. Note that Netflix's cumulative spending per subscriber is substantially higher than its 2016 and 2017 incremental spending per subscriber added - in some ways, you can say that Netflix had to spend a lot of money to build a base level of content to produce the foundation of the streaming library - many of these shows and movies will continue to be useful for years to come, and now Netflix only has to develop a set number of hit movies and shows to attract new subscribers each year. Netflix's cumulative spending per subscriber is ~$340 vs. ~$100 for 2017 and ~$105 in 2016 - the decreasing spend over time supports the notion that Netflix is building platform value and that as it builds a bigger content library, it needs less incremental content given its growing foundation of content. Netflix's LTV/CAC ratio is very robust and suggest the money being spent to acquire customers in the form of content spending and marketing is being very well spent. 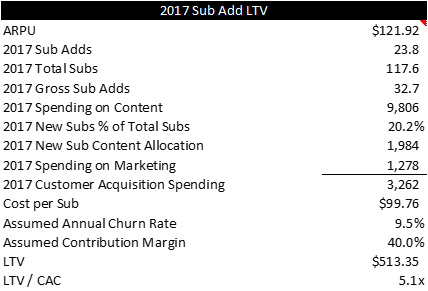 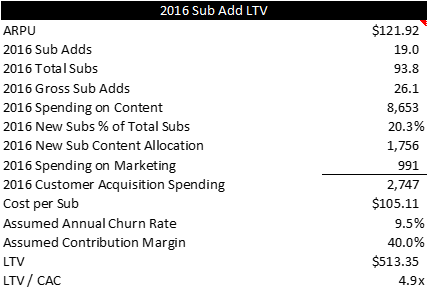 One of the biggest dangers in the content business is the potential for good content to be bid up to such an expensive price that the winning buyer ends up earning an unsatisfactory return on capital. This has been the unfortunate case for many networks that have overpaid for sports TV rights - many view ESPN as having overpaid in its most recent NFL rights deal. The same can happen in movies and TV - a successful director or actor has a few marquee hits, and suddenly there is an all-out bidding war among a number of networks and venues looking to acquire the next hit. Netflix's success has spurred a number of competitors like Amazon Prime Video, among others. Thus far, Amazon's video initiative has not been very successful - Amazon has failed to win anywhere near as many accolades as Netflix despite substantial investment; Amazon's studio has also faced issues given the head of the studio resigned in the wake of harassment allegations. The crux of Netflix's advantage against Amazon and the cable channels, in particular, is its massive collection of viewing data - Netflix has viewing data for its 125mm subscribers and has been able to very effectively use this data to accurately predict which shows will be successful so it can avoid spending money on shows that turn out to be flops. Competitors like HBO and Showtime are disadvantaged because until they fully transition to a more streaming-focused offering, they will lack the data collection ability Netflix has. Additionally, Amazon is much newer in the space, so it still has a long runway ahead to come anywhere close to Netflix's trove of data. In many respects, this is akin to the difference between Google and Bing back when Bing was actually somewhat of a viable competitor - Google won out by a wide margin given its advantage was self-reinforcing over time. The same is likely true for Netflix.

Netflix's data trove is useful for more than just predicting which shows and movies will be successful - it also helps enhance the customer experience by allowing Netflix to offer recommendations that a given user is likely going to enjoy. This was a very challenging problem for Netflix to solve given they struggled with a robust recommendation engine for a number of years - the problem was that people can have diverse tastes and someone who watches a Rom Com may also enjoy horror films which is hard to predict algorithmically. The elegant solution Netflix came up with was to pair people with similar users who watched the same shows as them and to use that as a source of recommendations (i.e., if you watched Stranger Things and also enjoyed The Punisher, group you with users who watched the same shows and recommend what those users had also watched). See here for some additional information for how the algorithm works. Yet again, with the clustering algorithm, Netflix's advantage as the largest streaming service makes it most able to match people with similar users - this is something that competitors can't match given no one has anywhere close to the scale Netflix has.

Despite a seemingly eye-popping valuation, a closer look under the hood at Netflix suggests that Netflix deserves a rich valuation given its massive scale advantage vs. its peers which have struggled to come anywhere close to its success. The fact that despite spending billions of dollars Amazon et al have failed to pose a real challenge to Netflix's entrenched position as the market leader signals its moat as the far and away leader in the space. Investing in Netflix today requires conviction in its ability to continue producing content people want to watch at attractive returns and that it has a long runway of potential subscriber growth ahead before reaching saturation. Given the company's impressive track record of executing and the ongoing dislocation occurring of cord-cutting, this seems an attractive bet to make.

Note: If you enjoy my analysis, please go ahead and click the orange follow button to get updates on future articles.