Altair’s product ecosystem serves the product lifecycle management (PLM) market which stood at approximately at $6 billion in 2017. The PLM market involves enterprise-class software development designed to address simulation and design issues, which is crucial to manufacturing industries as more corporations want to pace up their product research and design and ultimately improve manufacturing time and product quality in order to reduce cost and move products fast to the market to meet sales targets and market demand. Altair has generated a stellar organic growth rate, as reflected in its annual renewal rate of its existing subscription customer agreements (called “recurring software license rate”) which has been an average of 88% in past five years along with 60% of its new software revenue coming from expansion within existing customers. Both the indicators are crucial for specialized enterprise software developers with similar revenue models as the long term viability of such firms depend a lot on the retention of its customers while being able to advance more products through the existing ecosystem to solidify its market position and penetrating fresh sales prospects through acquisitions and expansions. With more than three decades of experience in the PLM market, Altair already has the DNA to take advantage of its intellectual capital and market knowledge and harness a fast paced growth. 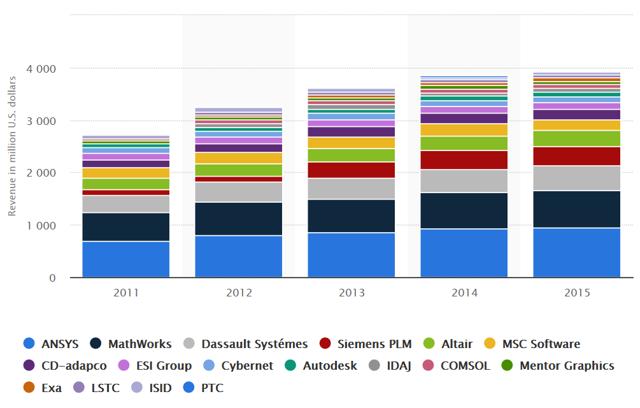 The simulation software market (interchangeably used with the terms PLM market, CAE market and Mapping, modelling & simulation market) is a highly fragmented one but has been undergoing industry consolidation and fast growth. Capstone partners identified 24 announced or closed acquisitions (based on Year-to-date which ended April 14), putting deal volume on pace with the same period in 2016. Presently the aerospace, automotive, defense and shipbuilding industries are utilizing the MMS (Mapping, modelling & simulation) market but new opportunities like are arising as more industries want to implement MMS into their products. Capstone partners added that the virtual reality headsets that are being used to train soldiers for warfare, give tours to house hunters, teach children and treat patient are increasingly using the power of MMS into their product design. Another factor that could disrupt the CAE market is the emergence of 3d printing. According to Orbis research the global 3d mapping and modelling market stood at $1.6 billion and expected to grow at an impressive cagr of 38.5%, reaching $11.6 billion by 2022. 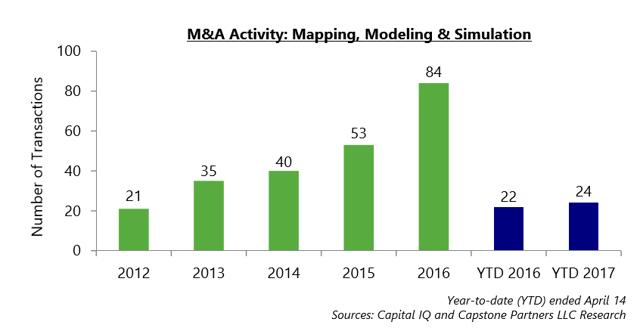 According to a research by MarketsandMarkets the global simulation software market stood at $6.36 billion in 2017 and the authors expect a 16.5% cagr throughout the next five years, reaching $13.45 billion in 2023. I think the cagr assumption is a bit aggressive (but not unattainable) and I would rather take an 8.1% cagr expectation as indicated in CIMdata’s Simulation and Analysis Market Analysis Report. The current implied market share of Altair by this estimation stands roughly at 5.38% (2017’s $333 mil revenue divided by $6.26 bil market size). In the forecasted years through 2022, the implied market share is extracted by dividing the forecasted revenue by corresponding market value of the CAE (computer aided engineering) industry. 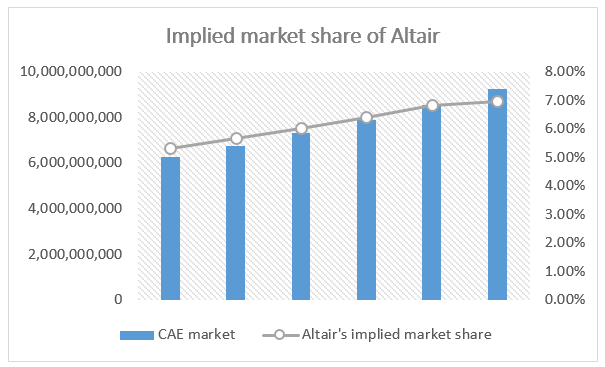 In the first quarter of 2018 Altair posted a 19% yoy revenue growth with adjusted EBITDA of $7.7 million. Deferred revenue increased 23% from a year ago and calculated billings were $114.6 million, an increase of 20% from a year ago which reflecting continued strong software momentum. Jim Scappa, CEO of Altair, revealed in Q1 earnings call that Solvers segment was seeing significant growth recently but no specific figures were mentioned. Since the first quarter Altair has acquired all of the intellectual property assets of California based CANDI Controls and FluiDyna which developed the computational fluid dynamics simulation software based on NVIDIA GPU technology. Two of FluiDyna’s renowned products ultraFluidX and nanoFluidX are computationally expensive high potential products, as addressed by Altair CEO in its recent earnings call. The ultraFluidX simulates external aerodynamics while nanoFluidx simulates gearboxes, solving important problems in today’s transportation industry. Altair expects total revenue to be between $369 million and $373 million in 2018 fiscal year, representing growth of 10% to 12% from 2017. The growth outlook is rooted in two things, one is its growing software product revenue and the next is the recent acquisitions it made. Considering the investments in R&D and sales and marketing activities, I feel that the expected results are economically attainable by Altair.

Altair’s solid gross margins are eroded by its operating costs because it is currently highly invested in R&D and selling costs (which also includes substantial stock based comps too). But despite negative earnings there are also other factors that should be considered. Altair is going through a growth stage after hitting the ipo with three decades of experience in the PLM industry. The recent acquisitions seem very calculated given that they address very specific issues like getting highly expert team from Candi (equity hire through acquisition) who are specialized in developing cloud-assisted network and device integration that connects the IoT devices with smart buildings and FluiDyna who are successful at solving optimization problem particularly to complex fluid mechanical problems. I expect Altair to carry through more acquisition throughout next few years before reaching a 10x+ EV/Ebitda multiple in the market.

The Altair ecosystem is fueled mostly by its direct sales force (generates approximately 90% of its sales) which is supported by technical specialists with deep knowledge of its products and the broader market. Approximately 9% of sales were generated by indirect sales channels, which is comprised of 300 resellers and OEM manufacturers since December last year. Altair is working to expand its indirect sales channels to sell to a broader set of customers as the firm so far has addressed the large enterprises mostly.

The CAE market has a comparatively lower entry barrier when compared to industries like energy and manufacturing which is one of the important risk factors for Altair. This has caused a fragmented market where many small players could come and play. In 2017 more than 50% of Altair’s revenue came from the automotive industry, which is also another risk factor but I don’t think it means Altair’s revenue mix will be focused only on the automotive. As it goes through its growth phase it could specialize on other industries too, like aerospace and defense and the reliance on automotive would be more balanced. The automotive industry itself has paced so far and I don’t think its slowing down, but the new types (for example electric vehicle) are replacing the old types. Currency exchange risk is an active risk given that the firm has customers world-wide and strengthening of US dollar could be detrimental to its results. Although currency risk cannot be fully mitigated but it can be managed better because of the availability of instruments in the financial markets.

I have used a 10 year horizon forecast because Altair is a new public company and has high growth potential given long track record and outstanding organic growth, combined with the availability of comparatively lower cost debt in coming days. According to Stern Professor Damodaran's industry average data, the average EV/EBITDA multiple for software (system & application) firms are roughly 22.62x. But I have used a multiple of 19x in my EV/EBITDA exit multiple assumption, taking a bit more conservative outlook. Altair has gone public just three years ago, and now its a great opportunity for the firm to grow. As a result my assumptions lead to negative operating income for first few years throughout the forecast period. But on the other hand, with the initial large expenses for R&D, SG&A and acquisitions, the firm will be able to set itself in a position where it can harness the high growth ladder and ultimately increase its sales faster while retaining substantial profit margins. The implied intrinsic value is roughly $31, which indicates that Altair is fairly priced in the market. But considering the level of economic moat Altair could attain in the coming years, price appreciation could be substantial.

Altair is competing in a fast growth market with substantial experience in the computer aided engineering field. With more manufacturers and designers moving to CAE based production to cut costs, pace up production time and ensure higher quality, its no wonder why similar firms like Ansys has posted high growth for last couple of years while big firms like Siemens and Dassault are investing in simulation software via acquisitions. Considering the industry attractiveness due to inherent growth aspects and high profit margins, Altair has gone public at the right time and presents a nice opportunity to high growth seeking investors.

Abrar Hassan Saadi
653 Followers
I always try to strike a fine balance between quantitative and qualitative factors and take a holistic approach in my research. My articles contain my opinions, they are not investment advice.
Follow