The U.S. Energy Information Administration has recently released their natural gas monthly statistics for April 2018. In this article, we will briefly review their consumption and exports figures, then look at our latest estimates for April and May and conclude with our forecast for June, July, and August.

Aggregate demand (national consumption + exports) for American natural gas surged by 20.5% y-o-y in April 2018. Consumption jumped by 21.7% y-o-y due to anomalously cold weather (there were at least 70% more heating-degree days in April 2018 vs. April 2017). External demand also remained strong, with exports up 12.3% y-o-y - mostly due to robust pipeline inflows into Mexico and strong LNG sales, which jumped by 70%. Indeed, based on Marine Traffic data, we estimate that Sabine Pass served at least 23 tankers (total natural gas carrying capacity of 75+ bcf). Cove Point served at least four vessels (total capacity of 12+ bcf). Strong exports growth and an increase in national consumption ensured that the growth in total demand stayed positive. In fact, on an annualized basis, aggregate demand has not posted a single negative growth figure since January 2010 (see the chart below). 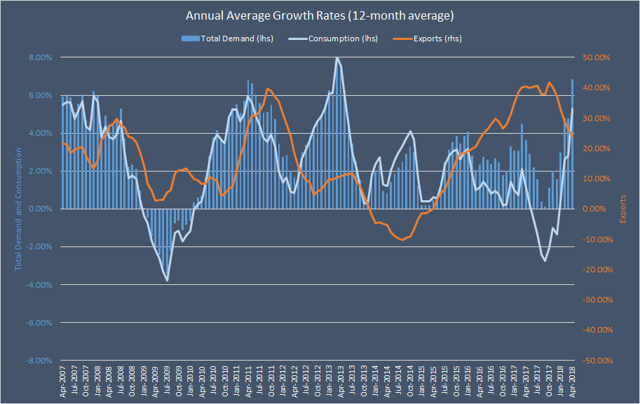 Total demand has been growing faster than consumption since May 2015, pointing to the rising weight of exports within the overall demand structure. On the chart above, you can clearly see that growth rates in consumption and exports often diverge. Despite occasionally weak consumption, total demand is still growing in annual terms due to very strong exports rate. Previously, however, total demand growth was almost entirely driven by national consumption.

Pipeline and LNG exports combined totaled 278 bcf or 9.2 bcf per day in April this year. The volume of total exports is now equivalent to 11.9% of national natural gas consumption on a monthly basis. On a 12-month average basis, exports now equate to around 11.70% of national consumption and its share in the aggregate demand structure has more than doubled over the past three years. 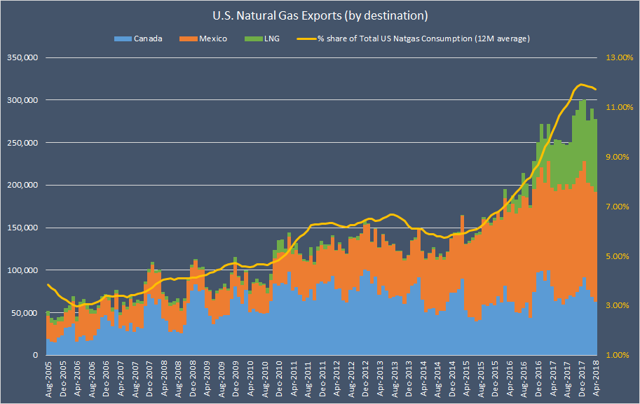 Exports remain the fastest growing source of demand for American natural gas. While total demand (12-month average) increased by 16.30% over the past five years (from January 2013 to March 2018), exports expanded by 98.80% over the same period. In fact, exports have already surpassed "Other" category in the overall demand mix and are now just as significant in weight as U.S. commercial users (see the chart below). 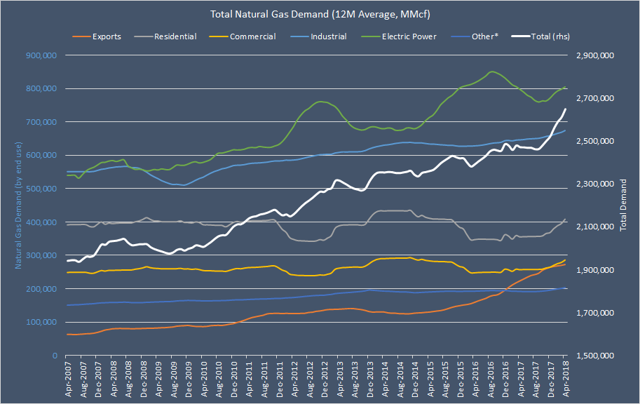 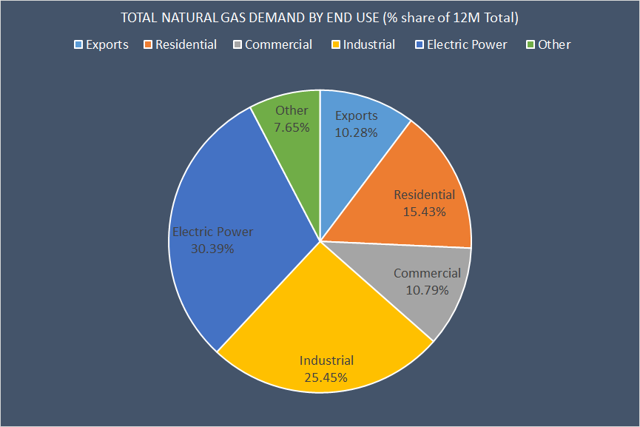 After rising by a whopping 21.70% y-o-y in April, natural gas consumption then continued to increase, but at a more measured pace. We estimate that it expanded by around 4.0% y-o-y in both May and June. Weather-induced cooling demand jumped almost 50% y-o-y in May and was some 7% higher y-o-y in June. However, coal-to-gas switching also provided a healthy boost to consumption as the spreads between natural gas and coal remained historically low (indeed, the spread has been negative in case of Central Appalachian coal). Currently, we expect natural gas consumption in the U.S. to remain strong in both relative and absolute terms.

Under the latest weather forecasts, we anticipate to see an average 3.7% annual growth rate in July, August, and September thanks to rising nuclear outages, stronger power burn (supported by low ng/coal spread), and above normal amount of cooling degree-days (CDDs). Please note that there is a large degree of uncertainty to that forecast, as weather models remain volatile and can generate sporadic changes in the number of CDDs.

Mid-term weather models are already covering the period up to July 17 and continue to show above normal amount of CDDs, although positive deviation from the norm has been flattening lately. We update our forecasts on a daily basis. If you wish to receive a regular update on key natural gas variables - weather, production, consumption, exports, and imports - consider signing up for our exclusive content (see the link below). 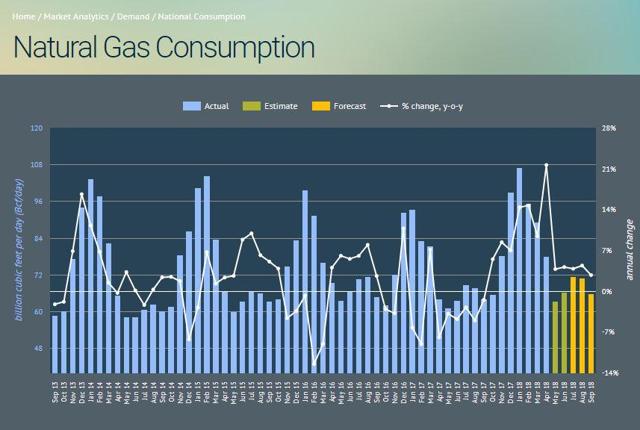 Exports should continue to expand rapidly. We estimate annual growth rate was probably just around 15% in May and 17% in June. Currently, we expect exports to total 10.7 bcf per day in July, 9.9 bcf per day in August, and 10.2 bcf per day in September. Please note that our LNG exports forecast is based on vessels tracking system, not on the liquefaction flows. Therefore, it is very likely to be revised higher.

What about supply? After all, it is not the demand which is driving the price, but the interaction between demand and supply. No doubt, dry gas production is strong. We estimate that it is currently at least 14% above 5-year average. We believe that over the next three months, total demand will be growing slower than total supply ensuring that total balance will be looser relative to 2017. We estimate that annual surplus will amount to 7.6 bcf per day in July, 9.3 bcf per day in August, and 14.4 bcf per day in September (see the chart below). Clearly, that would shrink annual storage deficit, but only to an extent. We do not currently expect double storage deficit (i.e., relative to 5-year average and relative to previous year) to disappear this year at all - at least, not at the current NYMEX Henry Hub strip (and especially not after today's 2.5% drop in the value of August contract). 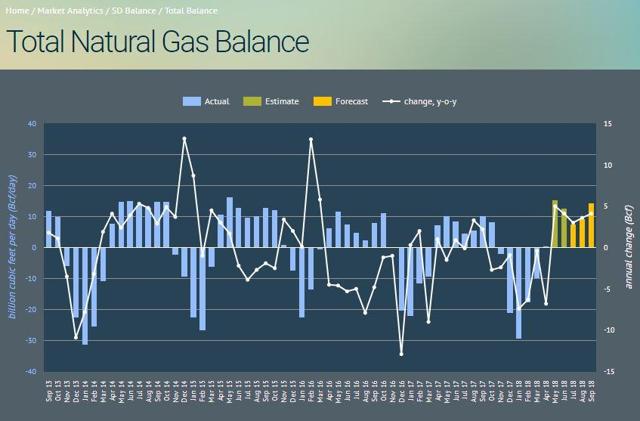 Thank you for reading our monthly report. We also write a daily update of our forecast for key natural gas variables: weather, production, consumption, exports, and imports. Interested in getting this daily update? Sign up for Natural Gas Fundamentals, our Marketplace service, to get the most critical natural gas data.