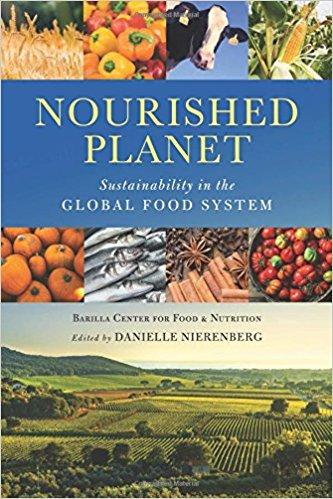 “Nourished Planet”, edited by Danielle Nierenberg is produced by the Barilla Center for Food & Nutrition Foundation (BCFN), a multi-national organization based in Italy. The book presents a wake-up call for all those still expecting business as usual! The book’s chapters lay out a grim scenario if we continue to try to use scarce land and crops to feed animals for meat-based diets. This wastes countless square miles of land, billions of gallons of water, over-uses pesticides, fertilizers and is causing antibiotic -resistant diseases, as well as other human health problems.

The industrial diets promoted by global grain-trading multinationals, Cargill, Archer Daniels Midland (ADM), tractors from Caterpillar (CAT), Yamaha, Deere (DE); processed food and beverage retailers and their massive marketing and advertising, turned out to be unhealthy, causing obesity and diabetes. Yet this giant global food-agriculture industrial complex may be as difficult to dislodge as the fossil fuel sectors.

While many have faced up to this huge and necessary transition to improve human nutrition and health, save planetary land, forests, freshwater while slowing climate change, this book lays out how this transition can be accomplished. Each chapter, while squarely facing the entrenched incumbents still driving consumer habits shaped by billions spent on advertising, also offers hope in new directions toward more sustainable lifestyles.

Chapter 1: Food for All, by experts, Hilal Elver, Hans R. Herren, Sieglinde Snapp and Vandana Shiva lays out the broad global picture with statistics on the ecological footprints of various foods (global square meters per kilogram or liter of food) which shows beef as the most wasteful, with eggs, breakfast foods yogurt, pasta, breads, fruit and seasonal vegetables with the smallest burden on ecosystems.

It adds food security indicators; hunger v. obesity charts, food deserts, and the numbers on food wasted. It also exposes the effect of commodity speculators on food prices, and how this dominates world markets. This chapter then looks at all the new possibilities in the new movements for agroecology, local organic growers, urban farming, with many case studies. Dr. Vandana Shiva, India’s crusader for the rights of small farmers, who are often forced into debt, committing suicide, adds “whoever controls our food system will control our democracy as well”. (pg. 52)

Chapter 2: Food for Sustainable Growth, re-imagines the familiar Food Pyramid, upending its focus on meat, as well as describing the well-known health benefits from Mediterranean Diets based on bread, pasta, tomatoes, other fresh vegetables and olive oil. A chart shows the carbon footprints of various foods, with CO2 emissions from animal-based diets as the worst and seasonal fruits and vegetables as the least CO2 emitters. Another chart shows water footprints of various foods, with beef, oil, cheese, nuts and butter as the biggest gulpers, while breakfast cereals, fruits and vegetables are the water-sippers.

The focus in this book is exclusively on freshwater, which comprises less than 3% of the water on this planet, on which all our food supplies are currently dependent. More on this later and how the planet’s other 97% of saltwater also grows food crops which are salt-loving (halophytes) such as the nutritious grain, quinoa found in health food stores and China’s flavorful salt-tolerant rice which fetch premium prices. These 10,000 varieties of salt-loving plants are the other half of the planet’s food kingdom, grown for millennia in over 20 countries, but ignored due to a well-known cognitive bias: theory-induced blindness.

Chapter 3: “Food for Health “describes the BCFN research into optimum health from nutrition, and other factors and the search for human wellbeing. Charts on food-related diseases, life-expectancy, mortality from diet-related causes, obesity, diabetes, heart disease and relates this to health costs in various countries as percentages of GDP. This chapter also recognizes that much of this research is well-known since the global bestseller by Frances Moore Lappé, “Diet for a Small Planet", first published in the 1970s. Daughter Anna Lappé, continues her famous mother’s work, authoring several books and directs the Real Food Media Project. Other food crusaders mentioned include Marion Nestle, the Children’s Food and Beverage Advertising Initiative, Alexander Muller of TEEB Agri-food, (based on Pavan Sukhdev's The Economics of Ecosystems and Biodiversity (TEEB), who wrote the Foreword to Nourished Planet.

Chapter 4: Food for Culture focuses on consumers and all of us who eat with contributions by Natasha Bowens, Lindsey Shute, Stephen Ritz and Ruth Oniang'o. It begins with Carlo Petrini’s famous picketing of a McDonalds restaurant in Rome in 1986, which spawned the worldwide Slow Food movement and its many spinoffs, including in the Slow Money groups that invest in organic, sustainable agriculture. As a researcher into saltwater based halophyte agriculture based on indigenous plants, I perused carefully the list of indigenous freshwater plants cited in this chapter. All these overlooked many nutritious plants and wild fruits like Brazil's popular jackfruit (not mentioned) are ways of diversifying out of the risky global food monoculture of today. Unfortunately, no salt-loving halophyte crops were included, missing half the story. Nevertheless, this book is the best compendium yet of all these global food issues and the many ways to address them.

For the other half of planetary nutrition, we can look beyond the blinders focusing only on our planet’s dwindling 3% of freshwater. Ethical Markets Green Transition Scoreboard® 2018 not only keeps track of private investments in green sectors worldwide (now a cumulative $9.3 trillion) but also looks at the cheapest, most ecologically-sound opportunities for investing in saltwater agriculture which can also capture CO2 most naturally and effectively. “Capturing CO2 While Improving Human Nutrition & Health“ reports the best startup companies in plant-based foods, urban farming, nutritious foods for substituting meat, chicken, fish, milk, eggs for the rapidly growing markets for vegetarians and animal rights activists. These now have their own investing consortium FAIRR, with $5 trillion AUM. Their new Index of the risks of meat-producers and sellers sees many of these companies as possible “stranded assets".

All this is food for thought for asset managers and investors looking for the next big thing.

Hazel Henderson
238 Followers
Hazel Henderson D.Sc.Hon., FRSA, is the founder of Ethical Markets Media, Certified B Corporation and producer of its TV series. She is a world-renowned futurist, evolutionary economist, a worldwide syndicated columnist, consultant on sustainable development, and author of The Axiom and Nautilus award-winning book Ethical Markets: Growing the Green Economy (2006) and eight other books. Her editorials appear in Wall Street International Magazine and many other media partners, including Other News, and her book reviews appear on SeekingAlpha.com. Her articles have appeared in over 250 journals, including (in the USA) Harvard Business Review, New York Times, Christian Science Monitor; and Challenge, Mainichi (Japan), El Diario (Venezuela), World Economic Herald (China), LeMonde Diplomatique (France) and Australian Financial Review. Since becoming a full-time media executive in 2004, Hazel has stepped down from many of her board memberships, including Calvert Social Investment Fund (1982-2005), the Social Investment Forum and the Social Venture Network. She has been Regent's Lecturer at the University of California-Santa Barbara, Horace Albright Chair in Conservation at the University of California-Berkeley, and advised the U.S. Office of Technology Assessment, the National Academy of Engineering, and the National Science Foundation from 1974 to 1980. She remains on the International Council of the Instituto Ethos de Empresas e Responsabilidade Social, Sao Paulo, Brasil; serves on the Program Council of FORUM 2000, Prague, Czechoslovakia, founded by the late President Vaclav Havel; is a World Business Academy Fellow; an active member of the National Press Club (Washington DC), and a member of the Association for Evolutionary Economics. She is an Honorary Member of the Club of Rome. She shared the 1996 Global Citizen Award with Nobelist A. Perez Esquivel of Argentina. In 2007, she was elected a Fellow to Britain’s Royal Society of Arts, founded in 1754. She leads the Transforming Finance initiative, created the Green Transition Scoreboard®, co-developed with Calvert the GDP alternative renamed the Ethical Markets Quality of Life Indicators, co-organized the Beyond GDP conference for the European Commission, and funded three Beyond GDP surveys, finding strong support worldwide for ESG metrics in national accounting. In 2010, 2012, 2013, and 2014, she was honored as a "Top 100 Thought Leader in Trustworthy Business Behavior" by Trust Across America. In 2012, she was honored with the Reuters Award for Outstanding Contribution to Development of ESG & Investing at TBLI Europe. In 2013, she was inducted into the International Society of Sustainability Professionals Hall of Fame.  Her 2014 monograph, Mapping the Global Transition to the Solar Age, published by ICAEW and Tomorrow’s Company, UK, is available for free download from www.ethicalmarkets.com.
Follow