Happy 4th of July everyone and what we have seemingly been accustomed to by now, is the fact that holidays that come mid week, seem to wipe out the whole week in terms of productivity. Anyway for the United States, July 4th is the iconic symbol of national independence as it commemorates the signing of the Declaration of Independence in 1776.

Despite being voted and signed on 2 days prior, we celebrate it on the 4th, maybe because that's when the document's actual wording was approved. Anyway, speaking of wording, it seems as if the Preamble has been thrusted to the forefront with the election of one Donald John Trump. We highlight this part of the Preamble as being most relevant in describing the new administration from those prior:

"That to secure these rights, Governments are instituted among Men, deriving their just powers from the consent of the governed, That whenever any Form of Government becomes destructive of these ends, it is the Right of the People to alter or to abolish it, and to institute new Government, laying its foundation on such principles and organizing its powers in such form, as to them shall seem most likely to affect their Safety and Happiness." 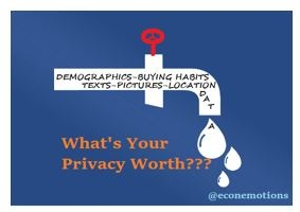 In other news, we thought it interesting that Facebook's (FB) submittal to congressional hearing's follow-up questions, some 2000 or so, exposed the fact that it continued to share data even after they admitted to such. Facebook continued to share data with 61 hardware and software makers as well as app developers even after the 2015 admission of sharing data and after they had said it cut off third party access (thehackernews.com).

The financial markets continue to exhibit worry about fed rate hikes, yield curve flattening and of course impending trade wars via tariffs. Speaking of trade wars, let's take a look at the Yuan shall we, as you can see, it's been weakening ever since things began to heat up (chart courtesy of CQG and Keystone charts): 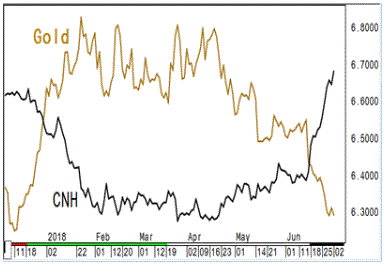 We know the Chinese are in a mad scramble to try and dedollarize but we tend to think those efforts are fleeting and we don't think this is what they had in mind when converting into gold, as you can see both the Yuan and Gold losing ground, aka double whammy.

Who says you can't win a trade war. Most don't realize but the US is in a very formidable position right now globally. Many disagree with this notion, but we tend to think that Trump will never negotiate from a position of weakness. Many don't know but his uncle John, in whom he is named for by middle name, was president of MIT. Word is his uncle also possessed all of the great Nikolai Tesla's files, God only knows how much data was extracted from that vast and profound knowledge base. Needless to say, we don't envy the rest of the world's position. 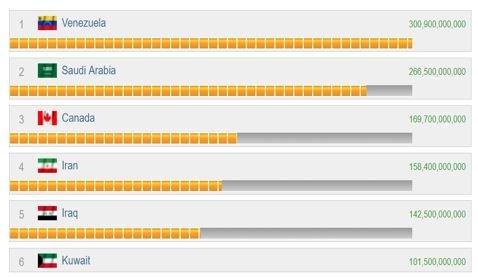 Has anyone thought why the hell has crude oil performed so well??? How much is America now producing? How much do we sell? The US sells nearly 10.6 mln barrels per day, second only to Saudi Arabia, so where is the petro dollar and weak dollar correlation again? Anyway, through our research and what we thought was strange is that, Venezuela has by far the largest oil reserves in the world, nearly 14% more than Saudi Arabia.

Maybe this is why the country is so destabilized. How the hell can a country like this with all this wealth, be so maligned, so malfunctioned and mismanaged? Considering it is a federalist setup on the forefront, but dictator presidential rule on the backside, maybe this has something to do with it. Maybe they should just link their currency to oil through the blockchain and then will they realize their power… just saying. 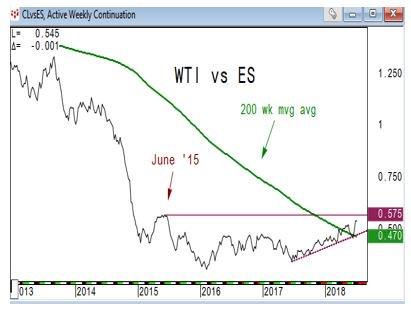 Speaking of oil, here is a chart from Keystone charts once again, pointing out the strength of oil even versus that mighty S&P 500. You can see the target resistance line; we are getting close, so perhaps some profit taking will hit the sector given such a locale.

Moving back onto the China-US theme, when we look at the Shanghai Composite, we can't help but think the S&P 500 will play catch down here as this entire year, the SHComp has underpriced the S&P 500 and the divergence has grown quite wide over the last month: 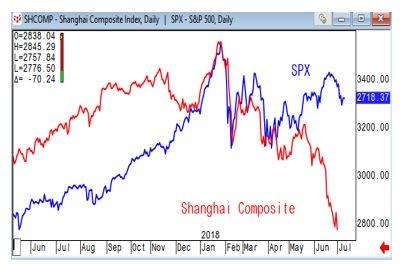 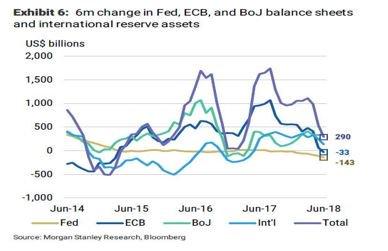 Then again, we all know there is a willing and formidable attempt to dump their wealth-generating mechanism. In fact, all this talk of the US tightening is just not valid in the larger central bank global scope of things. Here is a good chart showing how much tightening is not going on, perhaps on a relative basis but overall, we are still net QE $290 billion.

So where is all this QE going again? Well to a shrinking pie and of course PE and M&A. The WSJ ran a good article highlighting the fact that 2018 is on pace for record global deal volume:

In other news this week, Amazon (AMZN) bought online pharmacy PillPack Inc. for $1 billion in cash. This deal should worry the likes of CVS (CVS) and Walgreens (WBA), as Amazon continues to create the one-stop buy everything you need conglomerate. Seems a bit antitrust like, but we know that will never happen, even if Trump does talk a tough game.

Let's take a look at the futures settles for Friday, June 29th. Crude Oil has been the standout, up some 25% on the year and up 17% last quarter alone! Natural Gas was up 7% last quarter as well. The Russell 2000 was the best equity performer edging out the Nasdaq, up 10% and 8.7% respectively for Q2. We don't follow OJ but it was a standout for Q2 up 20%: 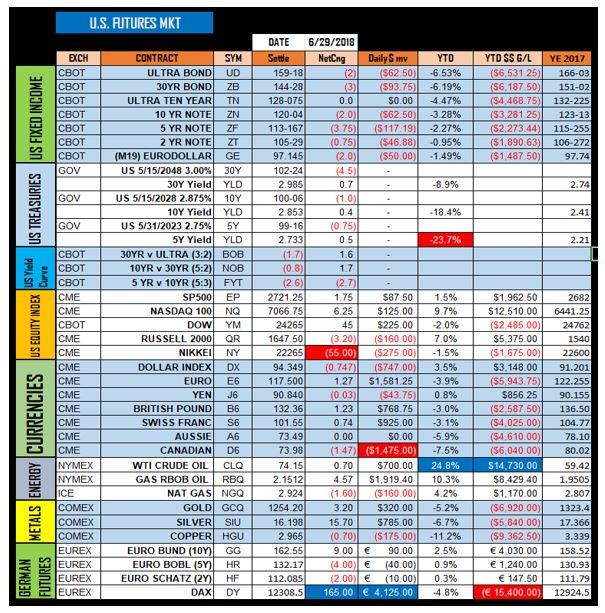 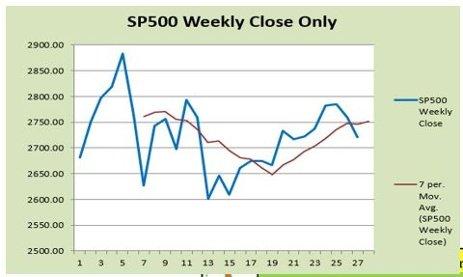 We would like to highlight the S&P 500 weekly chart of raw data and a simple 7-period Moving Avg. This weekly close should see follow-through this week if we can't trade above the 2750 area.

The Crypto Currencies were once again bottom-fishing but it seems as if the momentum has slowed and that a bounce was in order. This did occur over the weekend but here are the closes for Friday: 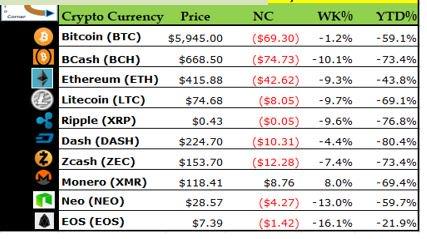 We highlighted a chart on Friday of Monero (XMR-USD) as we saw a nice bounce on Friday and they were actually up 8% last week:

As far as our CC Index boring to lower is how we can explain it, although with the weakened momentum, we may be gearing up for a nice summer bounce. As many know, the ecosystem continues to grow and we are more than bullish: 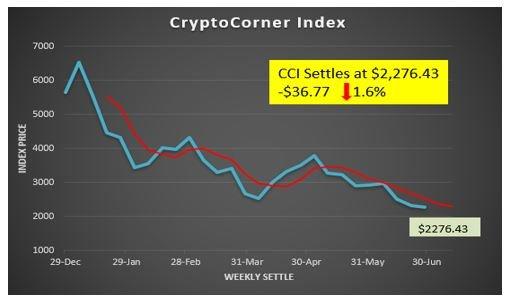 Just to reinforce our two-tiered economy once again, what has become the obvious theme of who truly benefits from QE, we have these headlines, first up, H&M (OTCPK:HNNMY), whose tag line is "fashion and quality at the best price." Well we suppose you can keep dropping prices, because if there isn't discretionary spending at the lowest levels, then demand sinks, inventories rise and as for profit:

As far as the luxury brands, well considering the disparity in income, this shouldn't come as too much of a surprise. Moët Hennessy Louis Vuitton SE (OTCPK:LVMHF) or what it is commonly referred to solely as Louis Vuitton or LVMH posted RECORD 2017 revenue, so too did Kering (OTCPK:PPRUY) group better known as Gucci and YSL: 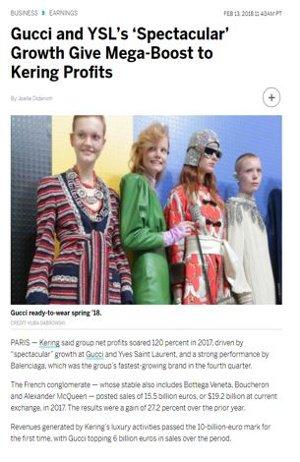 Okay that's it for this week. We hope you enjoy some parades, some outdoor fun and some intriguing local conversation. We know we will. Cheers!

Nell Sloane
289 Followers
Capital Trading Group, LLLP (“CTG”) is a Chicago-based investment firm focusing on alternative investment opportunities in futures and options markets around the globe. We provide comprehensive solutions for both investment managers – particularly Commodity Trading Advisors and for professional and individual investors.
Follow
5 Comments
To ensure this doesn’t happen in the future, please enable Javascript and cookies in your browser.
Is this happening to you frequently? Please report it on our feedback forum.
If you have an ad-blocker enabled you may be blocked from proceeding. Please disable your ad-blocker and refresh.