The growing number of supply outages around the world is causing the oil market to become a lot more volatile, putting extra emphasis on every barrel that does or does not make it to market. That makes the infrastructure bottlenecks in West Texas a global concern.

There is quite a bit of debate about what’s going on in the Permian, and whether or not the shale industry will be able to keep up with heady production forecasts. The IEA predicts the U.S. will add 1.7 million barrels per day in 2018, followed by another 1.2 mb/d in 2019. 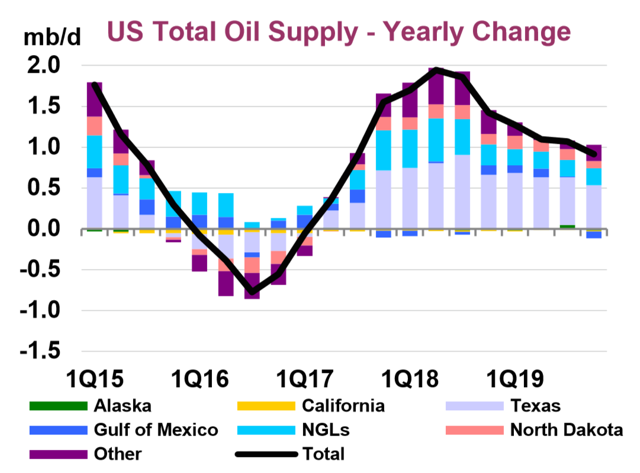 But by most accounts, the pipelines from the Permian to the Gulf Coast are either full or will be full in the next few months. That makes projections like the ones from places like the IEA look a bit optimistic, almost as if growth was simply extrapolated forward.

Others are more pessimistic. "We will reach capacity in the next 3 to 4 months," Scott Sheffield, the chairman of Pioneer Natural Resources Co. (PXD), told Bloomberg last month. "Some companies will have to shut in production, some companies will move rigs away, and some companies will be able to continue growing because they have firm transportation."

The Permian has roughly 3.1 mb/d of takeaway capacity, plus local refining capacity. There is theoretically some 300,000 bpd of train capacity, but a lot of that is being used to move frac sand, according to S&P Global Platts.

The steep discount for oil in Midland relative to WTI in Houston suggests that some oil could be moved by trucks, but that is an incredibly expensive option. “It’s a two-day trip and on the low side it’s at least $12 per barrel, probably more like $15 to $18,” Trip Rogers, a portfolio manager at BP Capital Fund Advisors, told Oilprice.com. He added that shipping oil by pipeline only adds $2 to $4 per barrel.

Only about 10,000 bpd is moving by truck and that figure could be capped at 40,000 bpd because of constraints on trucking, according to S&P Global Platts. There is already a nationwide shortage of truckers, and the cost of moving oil hundreds of miles from West Texas to the coast means that trucking is ultimately not really a viable solution in any big way.

The hefty discount could deter well completions. Indeed, the number of drilled but uncompleted wells continues to rise by triple-digits with each passing month, topping 3,200 in May.

Still, BP Capital Fund Advisors argues that the beating that Permian shale drillers have taken in terms of their share prices is “overly severe and particularly short sighted,” due to the temporary nature of the bottleneck and the long-term attractiveness of stacked pay zones in the Permian, which make drilling much more profitable than elsewhere.

In the short run, however, the constraints mean that some companies are starting to pivot away from the Permian basin. “We have seen that a bit. Yeah. And I think that’s logical, for those companies to have those options. It does make sense. We have seen that in some areas, we have seen some rigs relocated,” Trip Rogers of BP Capital Fund Advisors said. “Some companies have said they expect that completions could be down 10 to 15 percent.”

ConocoPhillips (COP) said it is pulling back from the Permian, although its retreat will be temporary as it awaits more pipelines towards late 2019 and 2020. Halcon Resources (HK) recently decided to scrap one rig, and C&J Energy Services delayed three well-fracturing fleets that were supposed to be heading into operation in October, according to S&P Global Platts. Overall, the Permian has lost four rigs since late May, while the Eagle Ford has gained two.

Zooming out, the troubles in the Permian will be felt worldwide. Because so many oil market forecasts assume large growth from the Permian, the notion that U.S. shale will undershoot expectations could present upside risk to oil prices. “It’s a big impact. I think it played a big factor in OPEC’s decision last week,” Rogers said. “It adds to the overall tightness of the global oil market.”

By Nick Cunningham of Oilprice.com

Oilprice
2.13K Followers
The website Oilprice.com offers free information and analysis on energy and Commodities. The site has sections devoted to Fossil Fuels, Alternative Energy, Metals, Economics and Geopolitics. To find out more visit our website at: http://www.oilprice.com
Follow