Russian relations have dogged the new Presidency. Any rapprochement with Russia would have been a plus given its nuclear arsenal and the threat it has to organized human life on this planet. Despite a promising beginning, relations have become frosty and a threat to the President's time in office due to the Mueller investigation and what it might unearth whether true or false.

To be seen not to be too friendly to Russia, it is likely that Russia will be treated more harshly than otherwise might have been the case

The purpose of this article is to look at the macro sectoral flows and assess whether Russia is a good place for investment.

President Putin took this lesson home and began lowering the interest rate in Russia and lo and behold, inflation fell with it.

Russian inflation is moving with central bank rate movements, downwards. There is a lesson there for other countries to learn from.

Ruble fluctuations influence GDP as measured in USD in the chart below:

Russia's GDP, expressed in USD, appears to fall. However, in reality, GDP has been growing, as the above chart shows. Apart from the dip in 2015 and into 2016, when the war in Donbass was in full swing, and international sanctions from the 2014 Crimea operation were also taking effect. The biggest hit though came from the decline in oil price. Oil accounts for roughly half of Russia's export income.

A balance of sectoral flows model was used after the work of British economist Professor Wynne Godley to assess Russia.

In 1970, Professor Wynne Godley moved to Cambridge, where, with Francis Cripps, he founded the Cambridge Economic Policy Group (CEPG). In early 1974, Godley first apprehended the strategic importance of the accounting identity - which says that measured at current prices, the government's budget balance, less the current account balance, is by definition equal to the private sector balance.

As a percentage of GDP, all three sectors sum to zero.

The following formula can express a nation's balance of accounts:

The community, business, and the stock market are located in P. For P to expand, it needs the balance of inputs from G and X to be positive. A negative balance causes P to contract.

When one adds all three sectors together, it equals the GDP for that year. One sector's loss is the other's gain, and if they all go down, so does GDP.

When one does a sectoral analysis, one finds the following...

The charts below show the key information required to calculate the sectoral balances:

Recent, current and projected annual sector balances are shown in the table below:

(Source: Trading Economics, FRED and author calculations based on the same)

* Estimate as actual numbers not yet officially released.

# Forecast based on existing flow rates and plans.

The private sector balance fell from 2016 to 2017 due largely to national government cutbacks and despite an improvement in the current account.

The picture for 2018 looks to be better despite contractive national government fiscal policy because the current account looks to be much stronger if the last two quarters can be repeated to round out the year.

A low to negative national government input shows that there is very likely going to be long-term productivity losses from a lack of investment in public services such as infrastructure, healthcare, and infrastructure.

The private sector balance, and therefore asset markets, is also reinforced by private credit creation from private banks. One can say that aggregate demand in any period is GDP + Credit. The chart below shows the private credit trend:

The table below provides a summary of net money creation in Russia from bank credit creation and national government spending.

* Estimate as actual numbers not yet officially released

# Forecast based on existing flow rates and plans.

Private credit creation by banks was weak in 2016, however in 2017, rose sharply and added over 3% to GDP or about US$39B to the economy.

Or the central bank, the currency monopolist, simply set the inflation rate where it wanted it.

What has changed though is that the exchange rate has fallen and this could be due to the increase in the number of Rubles on issue after the quantity theory of money.

Being a net exporter, the supply of Rubles overseas should be falling due to foreigners using them to pay for Russian oil. Repatriated Rubles add to the domestic supply but are not causing inflation.

The flow of credit adds to the stock of private debt shown in the chart below: 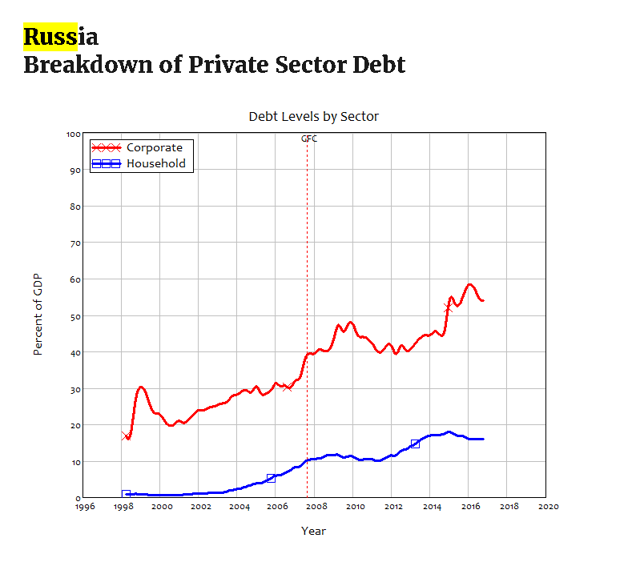 Private debt is about 70% of GDP, which is low by developed world standards.

Professor Steve Keen, an expert on private debt, says that 150% of private debt-to-GDP is the point at which most economies tend not to take on any more debt. It is a natural barrier.

Russia could add a further 80% of GDP to its private debt before meeting this natural barrier. Russia could sustain a big and long credit-fueled boom and then bust.

President Trump has no effect on Russia one way or the other. What does impact Russia is the price of oil.

Further, Russia is enjoying a resurgence in its current account balance. The national government is stepping back from investing in its nation, which will have long-term negative productivity impacts in the future. One cannot nation build using austerity anymore than a person can gain weight by not eating.

One large dark cloud on the horizon that affects all markets is documented in this recent article.

This was brought to my attention by Seeking Alpha Marketplace Contributor Mr. Robert P Balan and his PAM team. Mr. Balan's latest public article on this subject is located here. And this very important chart is reproduced from it below: 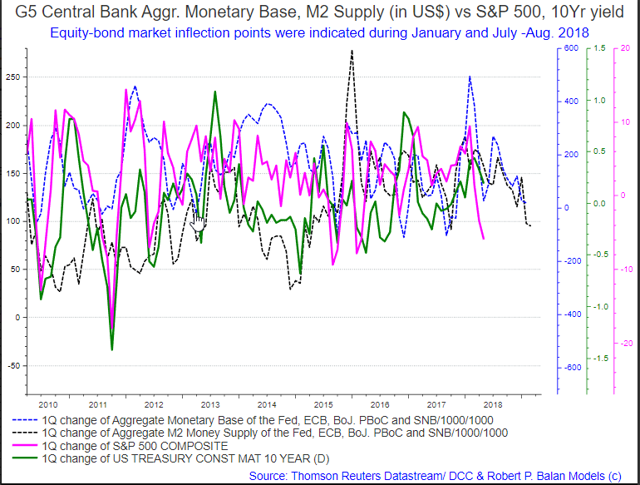 The simple takeaway is that when the Monetary Base of the big global Central Banks falls, so do asset markets and it is going to fall into the future like nothing we have seen before.

A single country with a robust economy, like Russia, may be doing well however, will be carried along by the wave of central bank selling. The black dotted line on the chart above is falling in line with central bank balances as assets are sold. This line can be projected into the future due to announced buying and selling rates by the central banks.

Every recession is different from the one before and catches most by surprise. If that were not so, mainstream economists could recognize them a long way off. The fact is they cannot because their models and paradigm are still stuck in the days of the gold standard that ended back in the 1970s and no longer apply.

There will be three broad effects:

2. Bond yields will rise and face values fall. The yield rises only because the face value has fallen.

3. The US dollar will soar as liquidity gets soaked up by the bond buying despite the "twin deficits."

Alan Longbon
2.32K Followers
My investment approach is very simple. I find countries with the highest and strongest macro-fiscal flows and low levels of private debt and invest in them using country ETFs and contract for difference (CFDs)I use functional finance and sectoral flow analysis of the national accounts of the nations I invest in. This is after the work of Professors Wynne Godley, Micheal Hudson, Steve Keen, and William Mitchell. Roger Malcolm Mitchell, Warren Mosler, Robert P Balan, and many others.One can analyze a country in seconds with four numbers as a % of GDP and these are G P X C where[G] Federal spending.[P] Non-Federal Spending.[X] Net Exports[C] CreditOne can then derive a set of accounting identities that are correct by definition.GDP = G + P + XAggregate Demand = G + P + X + C or GDP + Credit.GDP = GDIG and X are regularly reported in official national account statistics and one can work out P as follows:P = G + XAsset prices rise best where the macro-fiscal flows are strongest and where the private sector balance is highest.The 20-year land/credit cycle identified by Fred Harrison and Phillip Anderson is also a key investment framework that I take into account.
Follow