In the latest edition of the Market Overview, we have analyzed the risk related to the rising U.S. public debt and private leverage. This month, we will adopt a more global perspective. Until recently, thanks to the synchronized worldwide growth, it was easy to lose sight of the elephant in the room. But as U.S. interest rates have climbed in recent months and dollar has appreciated, we cannot ignore the debt threat any longer.

Indeed, the elephant is doing well. It is well-nourished and constantly growing. As the chart below shows, total non-financial debt has risen from 191 percent of global GDP at the end of 2001 to 210 percent before the financial crisis and to 245 percent today (the most recent data are for the end of September 2017). 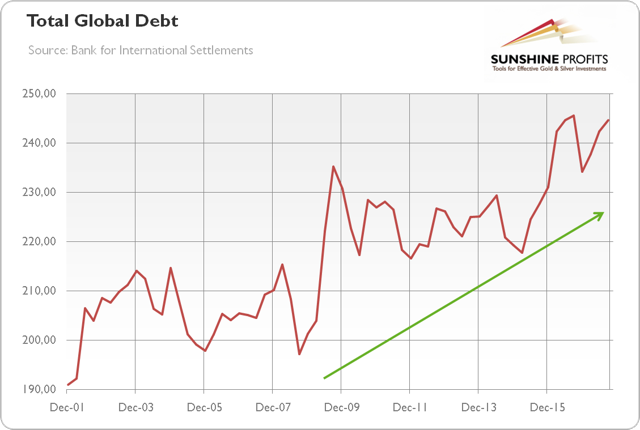 So much for deleveraging. Or actually there was a deleveraging. When you decompose the total debt, you will see that households have reduced their debt burden after the Great Recession (although it bottomed in March 2015). What happened was the increase in corporate indebtedness and even higher spike in the governments' obligations, as one can see in the chart below.

Chart 2: Credit to general government (blue line), to households (green line) and to non-financial corporations (red line) as % of GDP from the end of March 2008 to the end of September 2017. 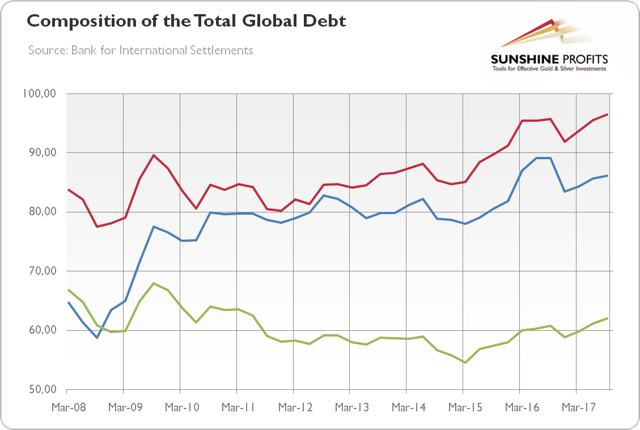 And that trend is set to continue, as populist agenda has been absorbed into mainstream politics. All you need is to look around, the post-recession austerity is dead. Although the macroeconomic conditions seem to call for budgetary prudence and fiscal tightening, the politicians loosen fiscal policy. The best example is the U.S. public debt, which is likely to reach about 108 percent of the GDP this year, despite the growth pickup. Not to mention Japan, where the debt-to-GDP ratio is above an unbelievable 250 percent.

Everyone who endured the economic crises knows that high debts create serious risks, as credit-fueled booms are clearly not sustainable in the long run. Hence, if policymakers do not make fiscal consolidation and do not implement structural reforms, something bad may happen when the good times pass away. The wolf does not need much to blow down pigs' houses made of straw and sticks. Just one puff. It's not hard to imagine an external negative shock to the global economy in our times. Just one tweet. And the house collapses and the wolf comes in. Gold should shine then.

Surely, the global economy recovered after the financial crises, but - as Carmen Reinhart noticed - "recovery is not the same as resolution." Many fundamental problems - such as excessive leverage, weak banks with non-performing loans, slow productivity growth or rigid markets - have not yet been solved. Instead, the ultra low interest rates eased the pain. But the yields are on the rise. The U.S. dollar has been appreciating recently. The example of Argentina clearly shows that emerging economies are still vulnerable to sharp and sudden appreciation of the greenback.

However, the near future is not so gloomy. All too often analysts focus on simple aggregate debt figures. Let's take China's total debt, which is expected to reach 260 percent of GDP at the end of this year. The aggregate number seems to be scary, but about two-thirds of the private-sector debt, which constitutes the majority of total debt, is held in renminbi by state-owned enterprises and local-government entities. Hence, the debt crisis in China is not as likely as many people believe. Or let's take Greece. The country is heavily indebted, but it pays lower interests than other countries, since the debt is held by public institutions and its maturity is very long. Or Uncle Sam. It adds fresh obligations to its big pile of debt, but the uptick in economic growth should cushion the blow.

The take-home message is that gold bulls shouldn't count on the outbreak of the next debt crisis anytime soon. Fair enough, the global pile of debt is staggering. And the rise in yields and in the value of the U.S. dollar will only deepen the problem of excessive indebtedness, especially for emerging countries. However, the interest rates have been climbing gradually, which softens the hit. And, we are sorry to say that, but the economic problems of emerging markets are not a huge problem for the global financial system. Gold will not benefit from their misfortune. On the contrary, capital flows from emerging economies into the U.S. will additionally strengthen greenback, putting the yellow metal under pressure.