On Friday, the US imposed tariffs on $34 billion of Chinese goods prompting China to respond with levies of its own. The US administration is keen to close the trade deficit, and it believes that imposing tariffs on China can do the trick. We don't agree with this rationale.

We expect that this is just the beginning of the trade war. The US will likely hit back, and though this may not happen immediately, it's just a matter of time. When the US does retaliate, China will too, probably without any delay. The momentum of this trade battle is controlled by the US. It can retaliate quickly to rock the market, or do so more slowly to allow investors to adjust.

Economic growth to soften in 2Q18

So how could this affect the economy? Well, tariffs don't just reduce the profit margins of exporters, they can also mean that exporters lose out on entire orders to other economies that trade similar goods. China's exports could be hit, and supply chain industries in China could be affected. This includes logistic services and packaging manufacturers, as well as the affected exporters' suppliers. This has been reflected in lower PMI readings (driven by lower export orders), which would imply lower 2H18 export activity. We suspect the negative impact from the trade war has yet to be fully reflected in the economic data.

But the threat from the trade war that has delayed investment decisions is not the only negative factor for the economy. Financial deleveraging reform is biting economic activity, especially in infrastructure investment, and therefore we have lowered our 2Q18 GDP forecast from 6.8% YoY to 6.7%. 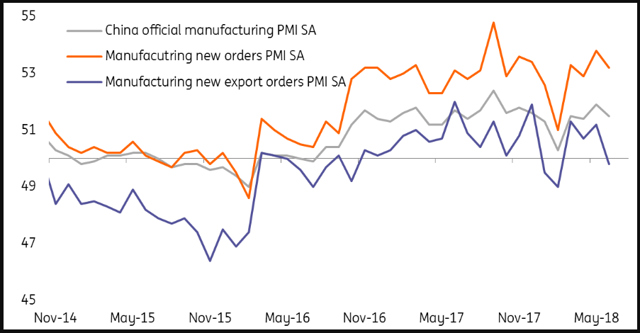 Having said that, we're still optimistic for economic growth in the second half of the year given the supportive measures being implemented by the government. Firstly, by not following the Fed in hiking the 7-day reverse repo and instead cutting the reserve ratio, the central bank (PBoC) has started to switch its monetary policy stance from tightening to loosening. These policies should help stabilise borrowing costs faced by corporates, especially SMEs, which could be hurt most by a trade war.

Secondly, there's fiscal spending, with participation in technology-related investment pools. Though these investment pools would not benefit export sectors, they would directly contribute to GDP, and raise the chances of China having its own high-tech components (for example, advanced semiconductor chips) in the future.

We also expect other fiscal support - for e.g., restructuring the individual salary tax - to support domestic consumption, and could increase domestic sales to reduce the impact of tariffs on exports. In the past, this has not proved easy, because goods destined for export were considered to be too expensive for the domestic market. But this has changed. We expect that both the export market and the domestic market are now more compatible with an increasing middle class.

Put this all together, and our baseline case is that GDP will rise in the second half of 2018 at a rate of 6.7% year on year.

Yuan could continue to weaken as trade war continues

We have also revised our end-year USD/CNY forecast to 7.0 from 6.60, and forecast the same USD/CNH as we believe the spread between CNY and CNH will continue to be small.

This revision reflects the fact that China has room to let the currency weaken by market forces in the middle of a trade war because it is opening up its market to attract more capital inflows. It reduces our previous concern that a weaker yuan would deplete foreign exchange reserves.

7.00 per dollar seems a steep depreciation but this speed is in line with our forecasts of other Asian currencies. China cannot defy gravity when it comes to appreciating against other Asian currencies, especially against Japan, South Korea and Taiwan because these are competitors in electronic exports. China won't depreciate against these Asian currencies because it won't initiate a currency war in the middle of a trade war.

ING Economic and Financial Analysis
2.16K Followers
From Trump to trade, FX to Brexit, ING’s global economists have it covered. Go to ING.com/THINK to stay a step ahead. We’re sorry we can’t reply to individuals' comments.Content disclaimer: The information in the publication is not an investment recommendation and it is not investment, legal or tax advice or an offer or solicitation to purchase or sell any financial instrument.This publication has been prepared by ING solely for information purposes without regard to any particular user's investment objectives, financial situation, or means. For our full disclaimer please click here.
Follow
6 Comments
To ensure this doesn’t happen in the future, please enable Javascript and cookies in your browser.
Is this happening to you frequently? Please report it on our feedback forum.
If you have an ad-blocker enabled you may be blocked from proceeding. Please disable your ad-blocker and refresh.