In a tweet yesterday, we noted that the S&P 500 was trading right at the exact mid-point of its 2018 closing high and closing low, putting the index about 5% below its 52-week high. While that's a relatively modest decline, stocks in the S&P 1500, which includes large, mid, and small caps, are down an average of 13.7% from their respective 52-week highs. Before we all go and start talking about how these numbers suggest much weaker internals than the overall market averages suggest, keep in mind that not all stocks hit their own highs simultaneously with the market. Therefore, this reading is always weaker than the overall reading for the S&P 500. In fact, even when the S&P 500 was hitting highs earlier this year, the average stock in the index was down in the mid to high single-digits.

What is interesting to note about current levels is how uniform they are across each market cap range. Between the average large cap, which is down 13.1% from its high, and the average small cap, which is down 14.4%, only 1.3 percentage points separate the two. Normally, the gap is much wider (with small caps usually down much more), but with small-cap domestically-focused stocks outperforming recently, the gap has narrowed. 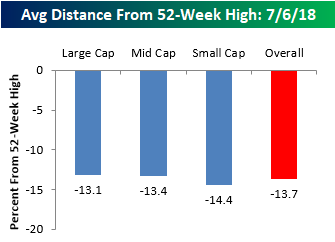 In terms of average stock declines by sector, the handful of stocks in the Telecom Services sector are down the most with an average decline of 18.9% from their respective highs. Behind that sector, you may be surprised to see that the next weakest sector based on this measure is Consumer Discretionary, where the average stock is down over 16%. Consumer Discretionary has been one of the better performing sectors this year with a gain of 11%. A lot of that strength, however, is the result of big gains in Amazon.com (AMZN) and Netflix (NFLX), which have large weightings in the market cap weighted sector performance. Among smaller cap names in the sector, the picture isn't quite as strong.

Sectors holding up the best relative to their highs are Utilities (-7.8%) and Real Estate (-9.3%). These are the only two sectors where the average stock is down less than 10%, and that's largely due to the fact that both sectors are defensive and not very volatile by nature. Stocks in these two sectors may well be holding up the best, but both sectors are actually underperforming the S&P 500 YTD. 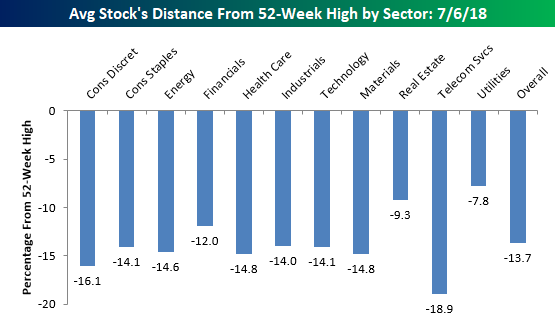 Finally, our last chart breaks down the average decline from a 52-week high by sector and market cap. Here, there are some interesting divergences. We already mentioned the Consumer Discretionary sector above, but a similar dynamic is playing out in Energy, and even more so in Technology. Within the Technology sector, the average decline from a 52-week high among large caps is less than 10%, while the average decline for a small cap is more than twice that at 18.2%. Besides small-cap Tech, the only group weaker has been small-cap Telecom Services, which is made up of just eight stocks compared to 95 for the small cap Technology sector.

While large caps are holding up a lot better than small caps in many sectors, we have seen the opposite pattern play out in the Financials sector. All we seem to hear this year is how Financials have been so weak, and while that may be true among large-cap Financials which are down an average 14%+ from their highs, small-cap Financials are down less than 10%. 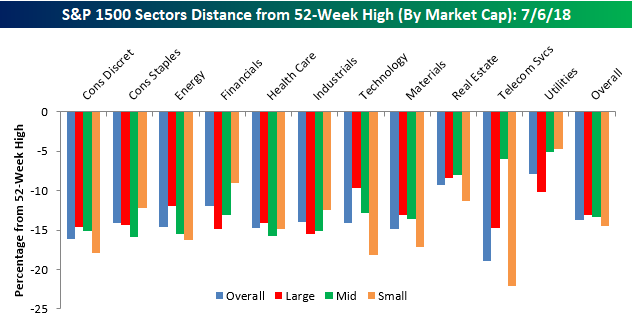 Bespoke Investment Group
44.5K Followers
Bespoke Investment Group provides some of the most original content and intuitive thinking on the Street. Founded by Paul Hickey and Justin Walters, formerly of Birinyi Associates and creators of the acclaimed TickerSense blog, Bespoke offers multiple products that allow anyone, from institutions to the most modest investor, to gain the data and knowledge necessary to make intelligent and profitable investment decisions. Along with running their Think B.I.G. finance blog, Bespoke provides timely investment ideas through its Bespoke Premium (http://bespokepremium.com/) subscription service and also manages money (http://bespokepremium.com/mm) for high net worth individuals. Visit: Bespoke Investment Group (http://bespokeinvest.com/)
Follow
3 Comments
To ensure this doesn’t happen in the future, please enable Javascript and cookies in your browser.
Is this happening to you frequently? Please report it on our feedback forum.
If you have an ad-blocker enabled you may be blocked from proceeding. Please disable your ad-blocker and refresh.