Earlier today, we summarized how far individual stocks in the S&P 1500 were trading from their 52-week highs based on sectors and market cap. In the table below, we wanted to highlight which stocks have been the biggest drags on their peer groups. The 27 stocks listed below are all down 50% or more from their respective 52-week highs. Leading the way to the downside, shares of MiMedx (MDXG) have plummeted close to 80% as that company deals with financial restatements (to put it mildly) and what some consider a potential bankruptcy filing. Behind MDXG, another five small-cap stocks lead the list of biggest losers, and all of them have lost at least two-thirds of their value.

The first non-small cap stock on the list is generic drug maker Mallinckrodt (MNK), which, at just under $20 per share, is down over 60%. From MNK's position at number seven, we have to go down another five to find the first large-cap stock on the list, Nektar Therapeutics (NKTR). The story of NKTR is one of tough timing for the S&P 500. The stock was added to the index back in March when it was trading at $105. From there, though, it's been all downhill as the stock has lost more than half of its value after releasing disappointing trial data at this year's ASCO conference. Going further down the line, the most notable stock listed is General Electric (GE). Things haven't exactly been going well lately for "the house that Jack (Welch) built." As if losing more than half of its value wasn't bad enough, the stock was also just booted from the DJIA.

In terms of sector and market cap breakdown, the majority of the stocks listed are from the S&P 600 Small Cap Index. While small caps are often an area of the market where investors look to find winners that will turn into large caps, it's also often the last stop for former large and mid-cap companies that have fallen on hard times. In terms of sector breakdowns, seven of the eleven S&P 500 sectors are represented. Health Care has the most misfits and accounts for a full one-third of the names on the list. Behind Health Care, Consumer Discretionary accounts for six stocks, while another five are from the Technology sector. 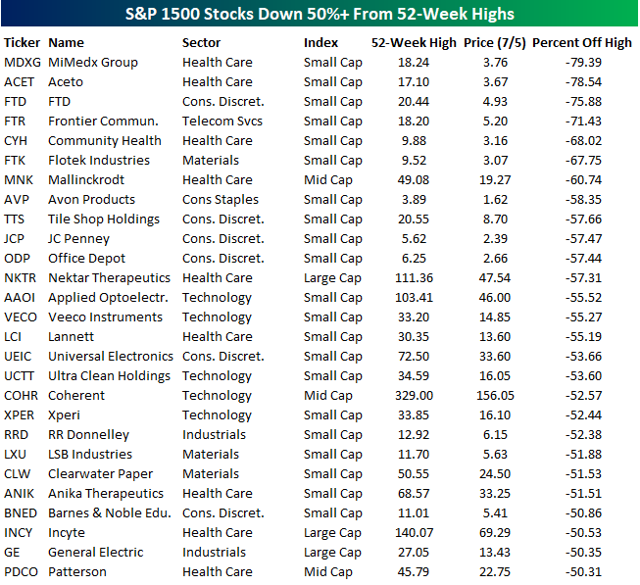 Bespoke Investment Group
45.64K Followers
Bespoke Investment Group provides some of the most original content and intuitive thinking on the Street. Founded by Paul Hickey and Justin Walters, formerly of Birinyi Associates and creators of the acclaimed TickerSense blog, Bespoke offers multiple products that allow anyone, from institutions to the most modest investor, to gain the data and knowledge necessary to make intelligent and profitable investment decisions. Along with running their Think B.I.G. finance blog, Bespoke provides timely investment ideas through its Bespoke Premium (http://bespokepremium.com/) subscription service and also manages money (http://bespokepremium.com/mm) for high net worth individuals. Visit: Bespoke Investment Group (http://bespokeinvest.com/)