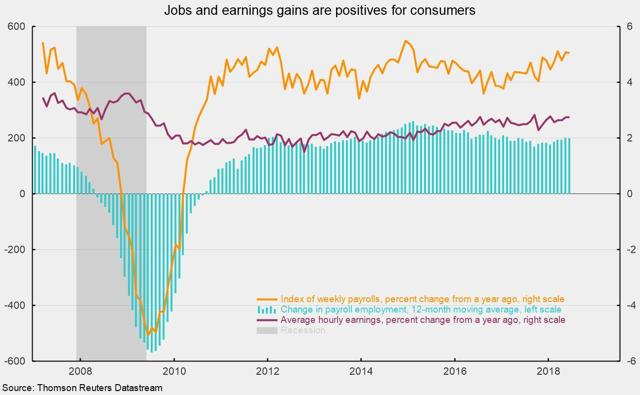 Payrolls in the United States rose by 213,000 in June, solidly beating an expected gain of 195,000. The healthy gain follows a robust 244,000 increase in May and puts the three-month average at 211,000 and the average over the past year at 198,000 - both very good results. The 12-month average has been rising in recent months after hitting a recent low of 168,000 in September 2017 (see bars in chart). In addition to the healthy payrolls increase, average hourly earnings rose and the average workweek remained steady. Overall, the June jobs report was very positive and supports an optimistic outlook for the economy.

Private-services industries added 149,000 jobs in June compared to 188,000 in May. Among the individual private-services industries, professional- and business-services payrolls rose by 50,000, healthcare added 35,000 employees in June, and leisure and hospitality added 25,000 jobs for the month. The weakest results were for retail industries, which have been erratic in their payroll gains, losing 22,000 jobs in June; information industries were unchanged, while the wholesale-trade and financial industries had gains of less than 10,000 each.

The strong labor-market conditions attracted a very substantial 601,000 more people into the labor force in June, pushing the labor-force participation rate to 62.9 percent, up from 62.7 percent in the prior month. The unemployment rate also moved higher, rising 0.2 percentage points to 4.0 percent in June, after hitting a new low for the current cycle of 3.8 percent in May.

Average hourly earnings rose 0.2 percent in June, holding the 12-month change steady at 2.7 percent (see chart again). The length of the average workweek also held steady at 34.5 hours. Combined, the gains in payrolls and hourly earnings along with steady hours worked resulted in a 0.4 percent increase in the aggregate-payrolls index in June and a 12-month rise of 5.1 percent (see chart again). This index is a proxy for take-home pay and has been growing in the 4 to 5 percent range for most of 2011 to mid-2018, providing a solid base to support consumer spending.

Overall, the employment report is very positive. The labor market remains the cornerstone of the current expansion and is boosting household incomes as well as consumer confidence. Combined with other strong economic data and the positive results from the AIER Index of Leading Indicators, today's report suggests a positive outlook for the current expansion. Gains in the labor market have accelerated recently, reducing fears of a pending slowdown, yet the gains remain modest by historical comparison, suggesting that the slower and somewhat steadier gains of the current cycle may help prolong the expansion.

American Institute For Economic Research
1.5K Followers
AIER educates Americans on the value of personal freedom, free enterprise, property rights, limited government and sound money. Our ongoing scientific research demonstrates the importance of these principles in advancing peace, prosperity and human progress. www.aier.orgFounded in 1933, AIER is a donor-based non-profit economic research organization. We represent no fund, concentration of wealth, or other special interests, and no advertising is accepted in our publications. Financial support is provided by tax-deductible contributions, and by the earnings of our wholly owned investment advisory organization, American Investment Services, Inc. (http://www.americaninvestment.com/)