The opening shots of the so-called trade war have actually been very kind. It's the sort of stuff Keynesian economists live for. Activity has been accelerated across a broad front. US imports moved first and now perhaps US exports are in on it, according to the latest Census Bureau estimates.

To begin with, the import side. Inbound trade rose 8% year over year in May (unadjusted). The pace of import growth has leveled off this year, suggesting temporary factors included in that rate. 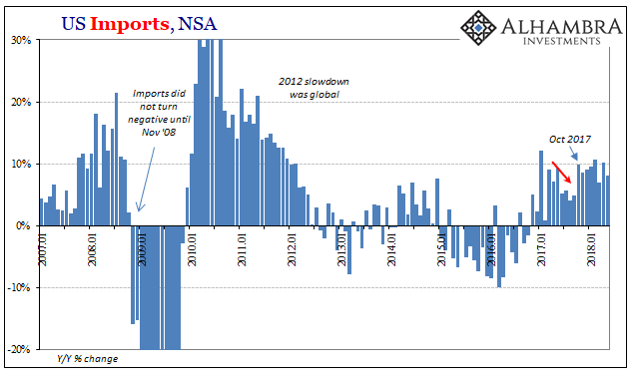 The first was the aftermath of last year's hurricanes striking the Gulf Coast. Imports rose sharply during those months, particularly October and November 2017. Outside of them, however, imports have barely budged. 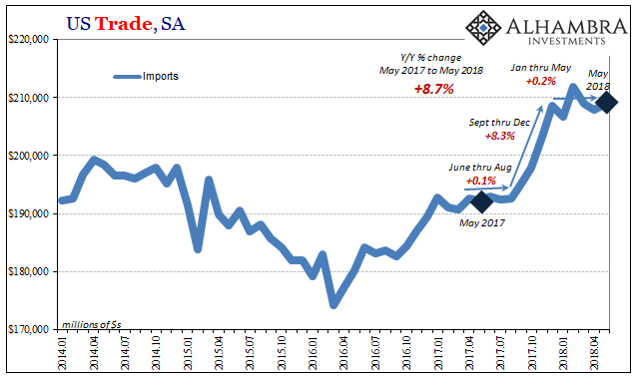 Of the 8.7% yearly change (seasonally adjusted), nearly all of it is derived from just the four months immediately following the big storms. And outside of a second jump in February 2018, coinciding with the big influx of Chinese goods, they have been essentially flat again this year.

I think the trade war effects are most visible in the figures pertaining to trade with China. Through January, growth had averaged about 10% which is significantly less than what the Chinese economy needs for maintaining a reasonably balanced expansion. In February, the year-over-year change jumped to nearly 20% as political interference seemed increasingly likely.

Over the last two months, Chinese import growth has dropped back to nearly flat. In April, the rate was just 2% and now in May only 4.8%. I don't think these represent a US slowdown (demand), more likely the channel stuffing from earlier in the year in anticipation of tariffs being imposed. Everyone knew it was going to start with China. 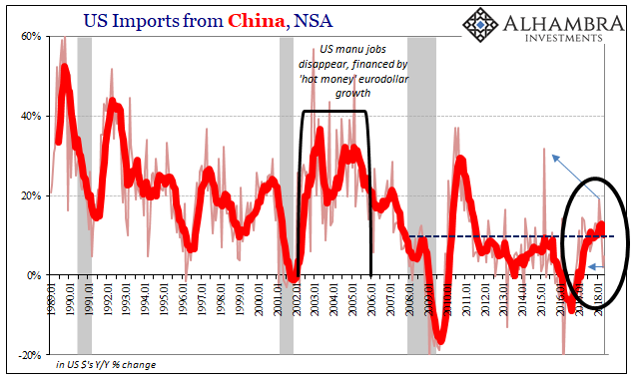 US exports have accelerated sharply in recent months. In May 2018, unadjusted exports rose by 12.9%, the highest growth rate since 2011. That might be the delayed emergence of globally synchronized growth, or it may just be US firms doing their own channel stuffing, preparing in anticipation of retaliatory trade barriers.

It would proceed imports first then exports, as US policy starts and others seek to answer. 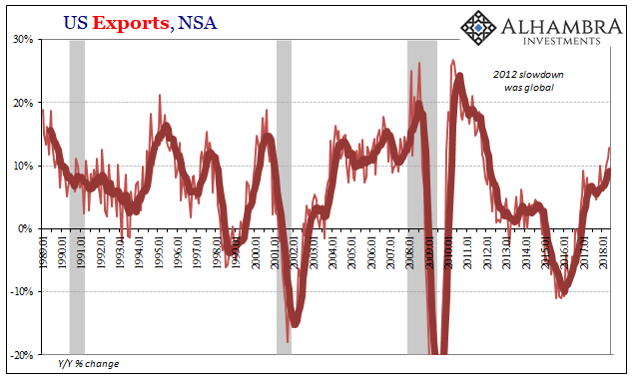 Trade figures both into and out of Europe would seem consistent with this idea. Europe's economy has slowed substantially this year from an already low level last year. Yet, in the last three months (starting in March 2018), US exports to the EU have grown by 15.7%, 17.2%, and now 17.9% in May. The Europeans have been threatening reprisals for several months. With tariffs now being imposed at least so far on Chinese goods flowing into the US, it's pretty clear this isn't just bluster.

The same trend is exhibited on the import side. US demand for European goods has jumped, too, despite what had been a stronger euro. Though the euro is lower since mid-April, it remains higher than in comparison to early 2017. 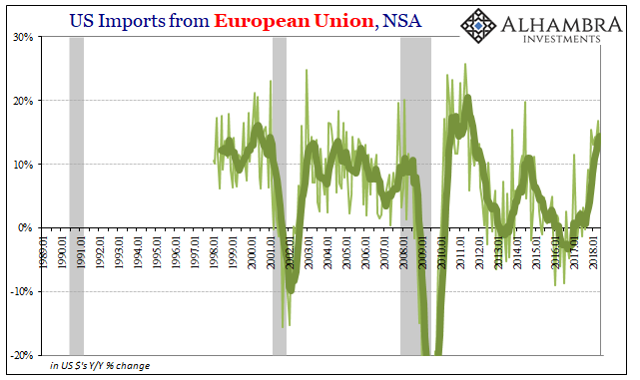 This is one of those reports where, depending on your point of view, the estimates can confirm whichever interpretation you fancy. Though I think the import side is perhaps a little further along in the process of breaking out of these temporary factors, we can't really know for sure for another couple of months until shifting trade policies settle into reality (or not).

Jeffrey Snider
4.64K Followers
As Head of Global Investment Research for Alhambra Investment Partners, Jeff spearheads the investment research efforts while providing close contact to Alhambra’s client base. Jeff joined Atlantic Capital Management, Inc., in Buffalo, NY, as an intern while completing studies at Canisius College. After graduating in 1996 with a Bachelor’s degree in Finance, Jeff took over the operations of that firm while adding to the portfolio management and stock research process. In 2000, Jeff moved to West Palm Beach to join Tom Nolan with Atlantic Capital Management of Florida, Inc. During the early part of the 2000′s he began to develop the research capability that ACM is known for. As part of the portfolio management team, Jeff was an integral part in growing ACM and building the comprehensive research/management services, and then turning that investment research into outstanding investment performance. As part of that research effort, Jeff authored and published numerous in-depth investment reports that ran contrary to established opinion. In the nearly year and a half run-up to the panic in 2008, Jeff analyzed and reported on the deteriorating state of the economy and markets. In early 2009, while conventional wisdom focused on near-perpetual gloom, his next series of reports provided insight into the formative ending process of the economic contraction and a comprehensive review of factors that were leading to the market’s resurrection. In 2012, after the merger between ACM and Alhambra Investment Partners, Jeff came on board Alhambra as Head of Global Investment Research. Currently, Jeff is published nationally at RealClearMarkets, ZeroHedge, Minyanville and Yahoo!Finance. Jeff holds a FINRA Series 65 Investment Advisor License.
Follow
3 Comments
To ensure this doesn’t happen in the future, please enable Javascript and cookies in your browser.
Is this happening to you frequently? Please report it on our feedback forum.
If you have an ad-blocker enabled you may be blocked from proceeding. Please disable your ad-blocker and refresh.