Well, it's the first Friday of the month, which means that the Bureau of Labor Statistics has released another Employment Situation Report, colloquially known as the jobs report. In this case, the headline numbers were somewhat mixed. The number of new jobs created came in at 213K, beating the consensus of 195K, but hourly earnings disappointed and the unemployment rate increased. As usual however, one needs to look beyond the headline numbers in order to understand the true situation in the jobs market.

As just mentioned, the number of new jobs created came in at 213K, beating the 195K consensus of the nation's economists. This marks yet another increase in what has thus far been one of the longest periods of employment growth on record. The June number is also one of the strongest prints over the past eight years: 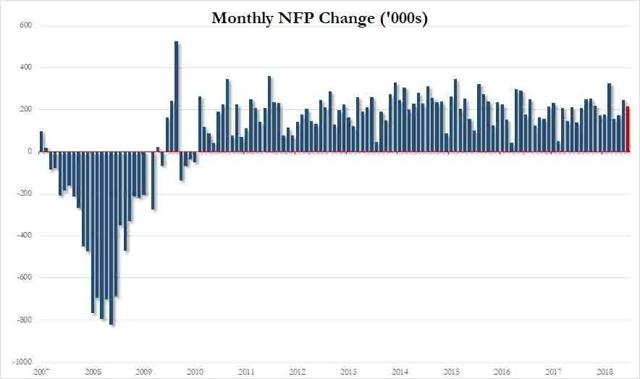 However, one of the problems with this headline number is that it makes no attempt to differentiate between differing qualities of jobs. For example, few people would argue that a full-time job is far superior to a part-time one, especially for a person that is trying to support themselves and their family. However, particularly in the years immediately following the last recession, the overwhelming majority of new jobs created were part-time ones. Thus, there were numerous instances of individuals that were formerly working full-time jobs that allowed for a middle-class lifestyle being forced to work multiple part-time jobs just to keep food on the table due to a lack of full-time positions available. While recent months have shown an improvement in this area, June was a clear exception to this. As we can see, the number of full-time workers declined by 89K while the number of part-time workers increased by 145K in the month. 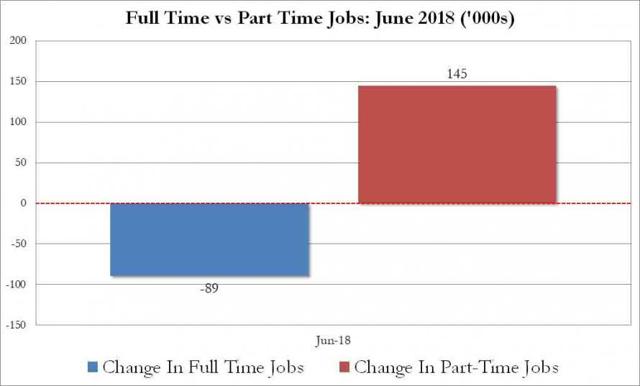 While this is certainly disappointing, the good news is that this appears to be an outlier. As we can see here, the majority of new jobs created over the past year have been full-time positions. 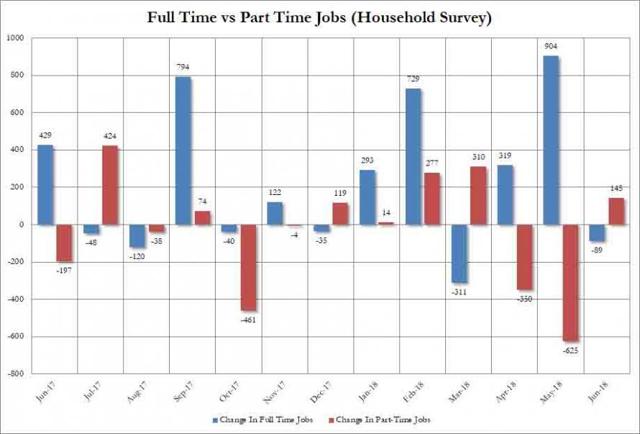 Another problem that has been present throughout much of the recovery thus far is that the majority of the jobs created have been in low-wage industries such as hospitality and retail. Such jobs do little in the consumer-based economy of the United States as they generally do not pay enough for an individual to support themselves, let alone a family or allow for much in the way of discretionary purchases. Thus, let us have a look at what industries added jobs during June to see if this is still the case. This chart shows each of the industries as categorized by the Bureau of Labor Statistics and how many jobs they added during the months of May and June: 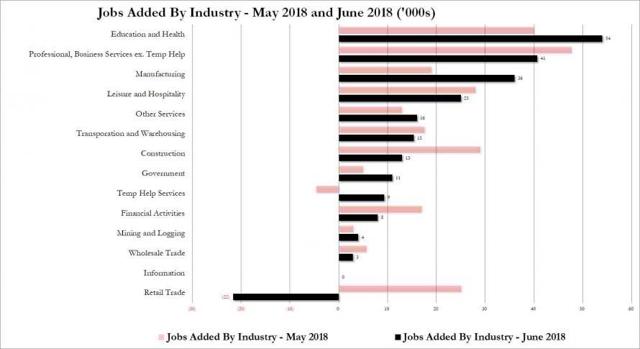 As we can see here, the top jobs-creating industries in the month of June were Education and Health, Professional and Business Services excluding Temporary Help, and Manufacturing. While Education and Health can be debatable, for the most part, these are all relatively high-paying industries. These are all industries that provide high enough wages for a comfortable middle class lifestyle, which is definitely a positive for the economy as a whole as it boosts the demand for goods and services in aggregate. Interestingly, the only industry that had net job losses in June was retail trade, which can mostly be explained by the Toys-R-Us bankruptcy layoffs. Fortunately, most of these are unskilled low-wage positions so it seems likely that many of the displaced workers will be able to find new jobs in relatively short order.

It may come as something of a surprise to some that the unemployment rate increased despite the relative strength in job creations. As mentioned in the introduction, the unemployment rate increased from 3.8% to 4.0% in June. However, this should not be a surprise to anyone that has been following my work over the past few years. As I have explained in the past, for quite some time now, the unemployment rate has appeared artificially low due to the large number of people that are removed from the official figures due to not looking for work during the month. In fact, last month there were approximately 102 million Americans of working age that did not have a job for one reason or another. In June, we saw some of these people begin to look for work again, which increased the number of unemployed people. In June, we saw the official number of unemployed go from 6.065 million to 6.564 million. As the numerator in the calculation went up, so did the unemployment rate. This also had the desirable effect of increasing the labor force participation rate. 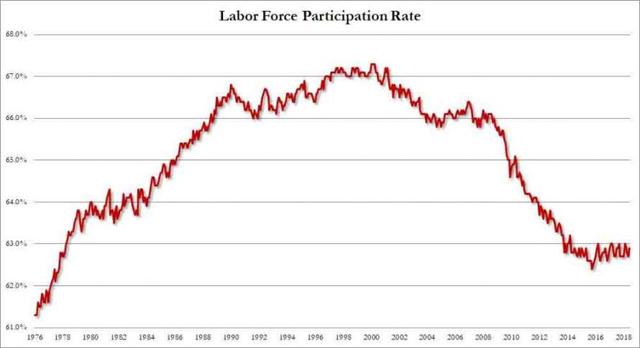 This is actually a good thing as it shows that formerly discouraged workers have begun to believe the whole jobs recovery narrative and have once again become optimistic about their prospects of finding work and thus have started searching again. With that said though, at 62.9%, the labor force participation rate is still at levels that it last held during the 1970s, so the economy still clearly has a long way to go until it has fully recovered. 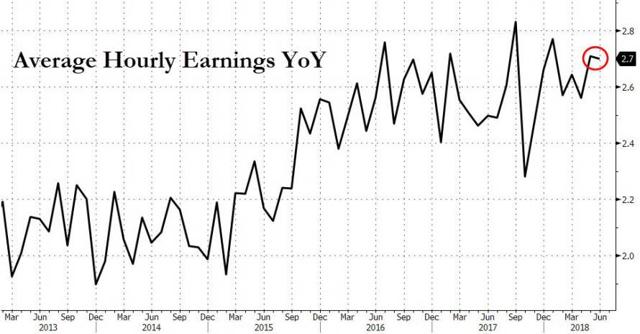 However, average weekly earnings were up 3.0% year-over-year: 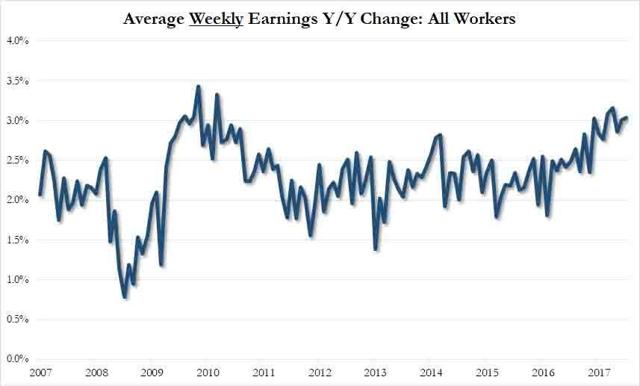 Ordinarily during times of a labor shortage, which several media headlines claim that we are now in, we would expect to see wages grow fairly aggressively. This is due to the economic law of supply and demand. A labor shortage would imply that there are more jobs available than there are workers to fill them. Thus, employers will compete against each other by boosting wages to secure the human capital that they need to conduct their business activities. However, as already mentioned, there are still a substantial number of people that do not have jobs (as evidenced by the labor force participation rate). As these people can still enter the labor force and increase the supply of labor, they represent a moderating force on wage growth.

Another factor that may be holding wage growth down is the large population of people that are only working part-time. As just shown earlier, the month of June saw a net loss of full-time positions and an increase in part-time positions. As part-time jobs typically pay less than full-time ones on both an hourly and total basis, this has the effect of skewing the overall average lower.

Overall, this was quite a good jobs report despite the mixed headlines. With that said, the apparent shift from full-time to part-time work is undeniably a negative if it persists going forward. In addition, there remains a substantial number of people out of work which shows that the economy still has quite a ways to go to fully recover. Overall though, it does appear to be on the right track.

Power Hedge
13.34K Followers
Author of Energy Profits in Dividends
In-depth Research on underfollowed dividend stocks with 7%+ yields
Power Hedge is an independent stock research and analysis firm with a passion for macro- and microeconomic analysis. Power Hedge focuses our research primarily on dividend-paying, international companies of all sizes with sustainable competitive advantages. Power Hedge is neither a permabear nor a permabull. However, we believe that, given the current structural problems in the United States, the best investment opportunities may lie elsewhere in the world. The firm's strategy is primarily buy and hold, but will stray from that strategy on occasion. Our ideal holding period is forever, however we realize that both internal and external forces can impact an investment. For this reason, we believe that it is vital to keep a close eye on all of your investments. We do not believe in changing an investment based on short-term market swings.