Remember Wimpy in Popeye saying, "I'd gladly pay you Tuesday for a hamburger today."

This is the way consumer debt works - it allows one to purchase today borrowing money with the promise to pay back tomorrow. I am not talking about home mortgages here as shelter is necessary whether one rents or buys. As you pay back a loan, that money is not available for other purchases.

Even if interest rates on the borrowed money are zero - the effect of buying with borrowed money is higher economic growth in the period of purchase, and less spending in the periods when the loans were being repaid. Currently, the average interest on credit card balance is over 13%, car loans are over 4%, and the interest on consumer loans is almost 10%. The interest on loans outstanding takes additional money from households which could be used for additional spending in the current period.

The purple line on the above graph is inflation. If income is keeping up with inflation, inflation is an offset to the cost of the interest. Currently, for most consumer loans, the delta between inflation and interest is over 8%.

But the gorilla in the room is the growth rate of consumer loans relative to consumer spending. If spending and borrowing were growing at the same rate, the relative economic affect would not be noticed. The situation since 2000 - loans are growing faster than spending. 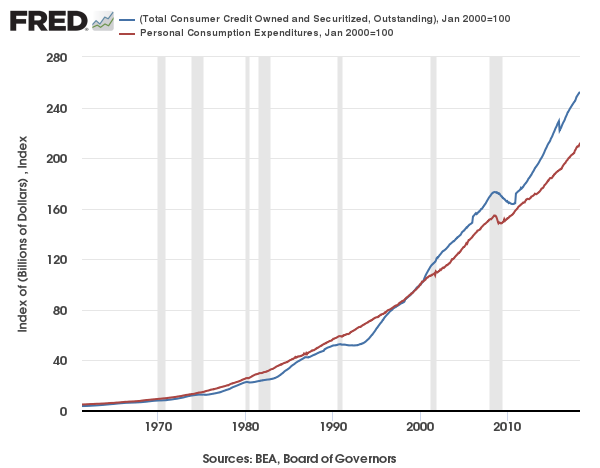 Steven Hansen
3.14K Followers
Steven Hansen (A.K.A "The Hand") was born, raised and educated in California. Steven worked for 25 years for a major international engineering and construction corporation. He has lived outside of the USA almost continuously since 1978. Steven retired in 1995 to sail the world. He is still sailing today and is currently located in Malaysia. On the financial side, Steven is a pragmatist. His motto is to "go with the flow" and believes that the only correct investing method is one which makes you money both short and long term. He does not fall in love with philosophies – only results. He has invested well enough to retire at 45 and stay retired.
Follow