We have just passed the two-year anniversary of the "Brexit" vote, and we are now heading into another crucial week. British Prime Minister Theresa May meets with her cabinet on Friday to finesse further details of the U.K.'s imminent departure from the European Union.

From a mutual-funds perspective, there certainly are potential material impacts on how the U.K.'s current fund passporting arrangements will be accommodated (or otherwise) in the new relationship with the EU. Fund houses are undoubtedly hoping for some clarity on this soon.

Despite the uncertainty around Brexit for U.K. firms, the two-year period since the initial vote has coincided with strong performance of funds in Thomson Reuters Lipper classifications popular with U.K. investors, particularly equities:

Fund volatility (as measured by the daily rolling ten-day standard deviation) of Lipper fund classifications popular with U.K. investors has declined markedly from the date of the Brexit vote, never returning to the original spike of late June 2016 (see chart below). 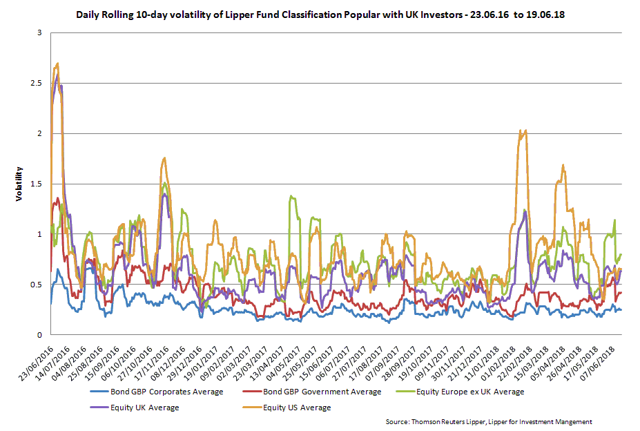 The inflation-led correction in U.S. markets from February 2018 can be clearly seen, but by comparison has caused less disruption - especially in bond fund volatility - than has the Brexit vote. This may be a signal that Brexit has now fizzled from a global news item into a particularly local event.

It's difficult to interpret fund flows in the context of a single geopolitical event such as Brexit because of the myriad factors that determine investor preferences. From the end of June 2016 to the end of May 2018, estimated net flows into U.K.-domiciled funds are £55.4 billion. This can be considered a reasonable figure and is proportionally commensurate with pan-European flows.

Global equity funds have certainly been winners, likely supported by strong performance. Interestingly, however, there have been net outflows from U.K. equity funds and U.K. equity income funds, despite robust performance (some of which is undoubtedly attributable to the fall in sterling since the vote). Global equity income funds too have suffered outflows perhaps as many popular "bond proxy" stocks become more expensive and investors buy into the global growth story.

For many fund managers, the aforementioned uncertainty surrounding passporting has caused them to consider solutions to ensure they will be able to sell their product suites throughout Europe.

Anecdotally, I would have expected the number of Dublin launches of funds registered for sale into the U.K. to be proportionally higher, but as with all things Brexit, interpreting numbers can be as difficult as reading tea leaves.

Lipper Alpha Insight
2.36K Followers
Lipper Alpha Insight (https://lipperalpha.refinitiv.com/) is a free daily news and commentary blog, giving financial professionals actionable ideas and insight to make sense of individual security news and events and stay on top of macroeconomic trends. We have a team of expert analysts that are constantly looking at the financial landscape in order to keep you up to date on the latest movements.
Follow