The dollar index is currently at a crossroads. The euro currency accounts for almost 60% of the index that measures the value of the U.S. currency compared to other foreign exchange instruments. In March 2008, the dollar index reached a bottom of 70.805, and it spent the next nine years moving higher finally finding a peak of 103.815 in January 2017. The move of 33% did not occur in a straight line. The low occurred around the time of the global financial crisis which was ignited by the housing and mortgage-backed securities issues in the United States and the sovereign debt problems in Europe. The dollar us the world’s reserve currency and during troubled times when investors seek safe and high-quality assets, the dollar tends to outperform other foreign exchange instruments. From 2008 through 2017, the dollar index worked its way to the upside.

A corrective move took the dollar index from the 103.815 peak to lows of 88.15 in February 2018 where it found its most recent low. Since February, the index has worked its way higher and has been flirting with the 95 level since late May. The 50% retracement level of the move from the January 2017 high to the February 2018 low stands at just under 96. The dollar index stalled at just below that level over recent weeks.

A significant bounce in the dollar

The decline in the dollar index came to an end in February.

As the weekly chart highlights, the index bounced around the lows until late April when a recovery began that took it to a high of 95.255 at the end of June. The dollar index started flirting with the 95 level in late May and has traded in a range from just over 93 to its most recent high over recent weeks. The index was trading at the 83.80 level on Friday, July 6. Price momentum on the weekly chart has risen into overbought territory and is crossing to the downside.

On the monthly chart, price momentum crossed higher, indicating that the path of least resistance from a longer-term perspective remains to the upside. The weekly chart shows that the dollar has stalled at just under its 50% retracement level of the move from the early 2017 high to the February 2018 low.

The daily chart shows that price momentum has crossed lower, but the dollar remains in a range since mid-June. The complicated technical picture for the U.S. currency is a result of the many issues facing the foreign exchange markets these days.

Are tariffs bullish or bearish for the greenback?

This year, the Trump Administration turned their attention to international trade issues. On the campaign trail, President Trump pledged to level the playing field between the U.S. and trading partners around the world. His program to “Make America Great Again” includes changing multilateral trade agreements into bilateral deals with partners around the world. Moreover, the President has told the world he expects new agreements to reflect “reciprocity and fairness” when it comes to these arrangements.

The President rolled out a series of tariffs on steel and aluminum, and he slapped China with $50 billion in tariffs that will begin to take effect on July 6. Trading partners around the world retaliated with protectionist measures on U.S. exports to their nations. The threat of a trade war is causing increased volatility in markets across all asset classes as the fear of a trade war has risen over recent weeks. The U.S. instigated the trade issue, which could weigh on the value of the U.S. dollar because of the retaliatory measures. However, the fear of the impact of the protectionist wave sweeping across the world has caused a flight to quality assets. Since the dollar is the world’s reserve currency, many market participants have sought refuge from market volatility by buying the U.S. currency. Therefore, the current trade dilemma has been both bullish and bearish for the dollar. The threat of a global recession triggered by international trade has not offered a clear path for the value of the dollar against other currencies as there are both bullish and bearish factors at play.

The dollar is a tool in the trade war

The Trump Administration has done things a lot differently than past residents of the White House. Previous administrations followed a strong dollar policy, but President Trump and Secretary of the Treasury Steve Mnuchin have made no secret of their desire for a weaker U.S. currency that would make U.S, exports more competitive on global markets. A weaker dollar could be a significant tool in a trade war for the U.S., while a stronger greenback could be used against the current policies of the administration.

In preparation for a trade war or mounting tit-for-tat tariffs and retaliation between the U.S. and China, the Chinese recently cut interest rates which made the value of their currency decline. However, the U.S. central bank has been going the other way as the Fed Funds rates moved 25 basis points higher in June, and the Fed added another rate hike to its agenda for 2018. The actions of the Fed are currently running against the desires of the President as a weaker dollar would be an effective tool when it comes to U.S. exports. However, retaliatory tariffs may trump, no pun intended, any impact the dollar may have on global trade in the coming months.

When it comes to the value of one currency against another, short-term interest rate differentials often determine the path of least resistance for a foreign exchange instrument. While the short-term rates in Europe and Japan will remain in negative territory until the end of 2018, U.S. rates, after the next two 25 basis point hikes will be at 2.25-2.50%. At negative forty basis points in Europe, the 265 basis point differential between yields on the dollar and euro currencies is just too much, and it is challenging to keep a high-yielding currency like the dollar down. Moreover, as the principal reserve foreign exchange instrument, bullish fundamentals continue to support the value of the dollar.

The technical levels to watch - Did the dollar find a comfortable level?

The next level on the upside for the greenback index stands at just under 96, which is the 50% retracement level. Above there, there are few technical resistance levels as the dollar dropped for five consecutive months from March through July 2017.

The dollar index was looking ugly at the start of the year, and it looked like the U.S. currency was heading significantly lower. However, a mixed outlook from the trade issues and the yield differentials that underpin the dollar are currently telling us that the path of least resistance is higher in the medium-term. From a long-term perspective dating back to 1985, the failure of the dollar at the start of 2017 indicates that a pattern of nine years of rallies and seven years of declines could mean a return to lower levels if the pattern of the past thirty-three years remains intact.

While the Trump administration would like to see a weaker dollar, the fundamentals of the currency market currently point the other way. 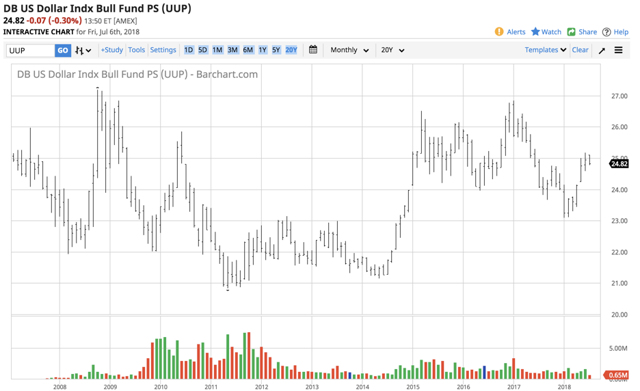 UUP is the Invesco DB U.S. Dollar Bullish ETF product with over $509 million in net asset and average daily trading volume of almost 1.23 million shares. For those who do not trade in the foreign exchange markets, UUP could be the best way to position for further gains in the dollar versus the euro and other primary world currencies over coming weeks and months. UUP was trading at the $24.82 level on Friday, July 6.

The dollar index has stalled near the highs, but if it breaks above the 96 level, we could see a run to the upside as fundamentals continue to support the value of the world’s reserve currency.

Andrew Hecht
27.81K Followers
Author of Hecht Commodity Report
Weekly commodities commentary and calls, from a Wall Street veteran
Andy Hecht is a sought-after commodity and futures trader, an options expert and analyst. He is the #2 ranked author on Seeking Alpha in both the commodities and precious metals categories. He is also the author of the weekly Hecht Commodity Report on Marketplace - the most comprehensive, deep-dive commodities report available on Seeking Alpha.