Last week, I wrote a piece on the impact of artificial intelligence on the labor force going forward. We discussed the need for an increase in production before we could see any sustainable wage growth. We also addressed the shrinking of the labor force and the impact it may have on wages.

Here, I hope to paint a clear picture on the economic effects of these long-term trends.

On Friday, the Bureau of Labor Statistics announced the payroll numbers for the month of June. The numbers were described as stellar. At the same time, they were referred to as Goldilocks numbers - not too hot and certainly not too cold. The employment report is a good entry to my article today.

First of all, there was 213,000 new jobs created, while the Street was expecting 195,000. Job growth has averaged 215,000 jobs per month for the first six months of 2018. The unemployment rate has ticked up from 3.8% to 4%. We will discuss the cause of this increase a little later in the article. Wage growth was rather flat but increased 2.7%. Here we see no indication of wage inflation, even though we have 6.7 million jobs available and only 6.4 million in the ranks of the unemployed.

A few months back, I wrote an article that expressed an expectation that the labor market had some ways to go before wage inflation would become an issue. This month’s employment report is a great example of why I believe that to be true. Just a .2% increase in the historically low participation rate added 601,000 new workers to the workforce. Historically, the normal participation rate has been close to 67%. A move back toward that number would grow our labor force tremendously.

On the other hand, a continued slide in the labor participation rate would, in fact, significantly tighten the labor market and drive unemployment rates toward 3%. In turn, without a significant increase in productivity, we could experience an unwanted spike in inflation due to the tight labor market.

The Bureau of Labor Statistics and the Census Bureau have done some extensive demographic research projecting the resident population in the United States going out to 2060. It stands to reason if these numbers could be calculated with any degree of accuracy, we would have a good indication of what the labor force would look like stretched out many years.

The chart below shows the projected resident population growth over the next few decades. 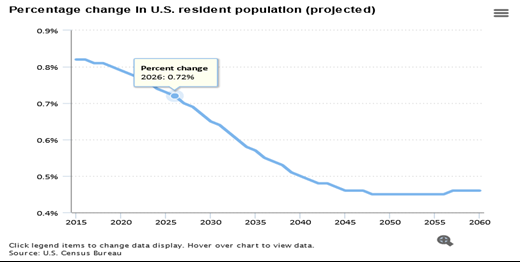 In the Census Bureau’s latest projections, the growth rate (percentage change) of the resident population is projected to decrease in the long term.

I have mentioned in the past the importance of immigration for our labor force. It certainly has a significant impact on our population growth. As you can see in the chart below from the Census Bureau, immigration will increase significantly as the natural increase in total population falls. 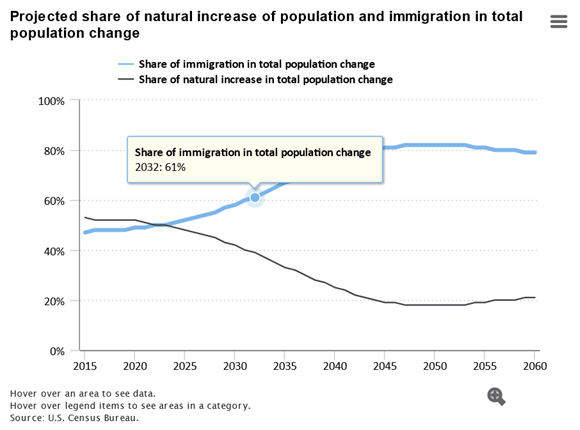 In 2022, the share of natural increase and immigration in projections of the resident population will be equal and at 50 percent.

With a decreasing rate of growth in our population, combined with an increase in our need for immigration, the Bureau of Labor Statistics has made its own projections regarding the labor participation rates going out four decades. 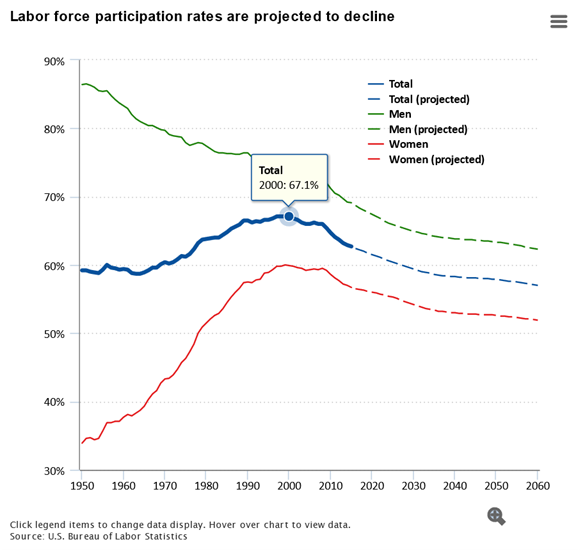 The army of economists and demographers working for both the Census Bureau and the BLS are extremely bright individuals. The resources they have access to is immeasurable. As you can see in the chart above, they project that the labor participation rate will fall below 60 sometime around 2020. If their projections are anywhere close, we could very well see unemployment rates 3% or below over the next few years. Furthermore, without a significant increase in productivity, we could see wage inflation seriously impacting our economy.

As I pointed out in my last article, the need for artificial intelligence and robotics will be necessary to offset the fall in our labor force for many years to come. This, hopefully, will be the catalyst to increase our productivity and therefore avoid a stagnant economy coupled with higher inflation.