The stock market's latest setback was another test of strength for the current phase of the bull market. And while that test isn't completely over, all indications point to a successful outcome. In today's report we'll see why the high levels of fear and liquidity which characterize this market are extremely healthy and tell us the bull is still alive and well.

The broad market had a couple of truly constructive trading sessions late last week which shone some light on the week ahead. For the first time in a while, the number of stocks making new 52-week lows on both exchanges was below 40 while the new highs outpaced the lows by margins of 4:1 and 6:1, respectively. This was an impressive showing, though we still need to see at least 2-3 more days of below 40 new lows to confirm the market's internal health has been completely restored.

Meanwhile the other aspects of the NYSE tape are also showing improvement. The NYSE advance-decline (A-D) line is back above its previous all-time high and is powering ahead to new highs, which tells us that breadth for the overall market is decisively bullish. This is especially noteworthy given that leadership in the A-D line has served as a leading indicator for some of the major averages throughout this year.

Cumulative volume on the NYSE, which measures advancing volume minus declining volume, is also at a new high as of Jul. 6. Taken collectively the A-D and cumulative volume lines present the big picture of a stock market still in strong hands despite some softness in the industrial and financial sectors.

Another positive for the market's intermediate-term (3-6 month) trend is the continued relative strength of the tech sector. The cumulative new 52-week highs and lows for the Nasdaq is at an all-time high and trending higher. This indicator alone is a big sign that the bulls still control the Nasdaq and this favors higher prices for the tech stocks this summer. 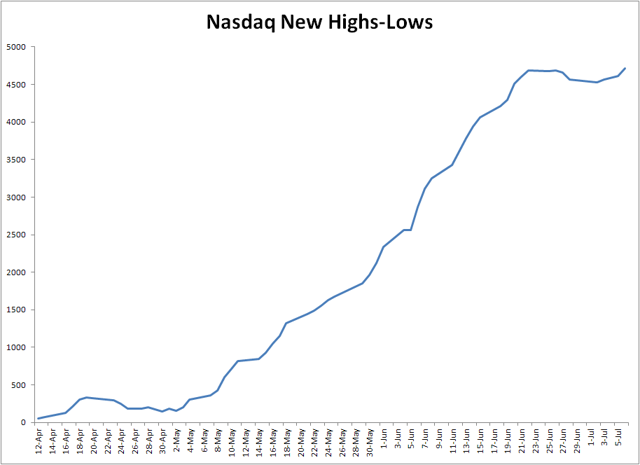 Investor sentiment is also supportive of the bull market's continuation. The latest investor sentiment poll from the American Association of Individual Investors (AAII) shows that for the second straight week the percentage of bears (39%) significantly outpaced the percent of bulls (28%). This marks one of the few times this year when the bull-bear disparity has been so pronounced on a 2-week basis. It tells us that investors have pulled in their horns and are far less enthusiastic on the interim outlook for equities than they were just last month. This presupposes not only a reduction in the stock market's "overbought" status from previous weeks, but also a healthy buildup in short interest which can be used to fuel a short-covering rally at any time. By the looks of Friday's (Jul. 6) trading session, the latest short-covering rally has likely already started.

Mutual fund investors have shown even more pessimism than normal. According to the latest reading of the Rydex Funds Nova/Ursa Ratio Sentiment Indicator, the intermediate-term sentiment of mutual fund investors in the Rydex funds has been quite bearish of late. Intermediate-term Rydex bullish sentiment is at only its fifth lowest level in the last seven years. From a contrarian perspective this is definitely an encouraging sign. If nothing else it increases the chances of a short-covering rally in the near term. Combined with the still-abundant liquidity bolstering the broad market, investors should expect that the recent internal correction will resolve in favor of the market's upward trend resuming at some point this summer.

Yet another positive aspect of this market, assuming it continues, is the latest pullback in the U.S. dollar index (DXY). A DXY pullback will give stocks some much needed room to breathe as the dollar's powerful rally of the last two months put some downward pressure on the stock market. The dollar's rally was moreover an indication of the increased risk aversion among global investors in light of the recent emerging market's sell-off. In their mad dash to raise cash, investors with emerging market exposure fed the dollar's rally and put downward pressure on the U.S. equity market due to the spillover impact of the trade tariff-related selling. 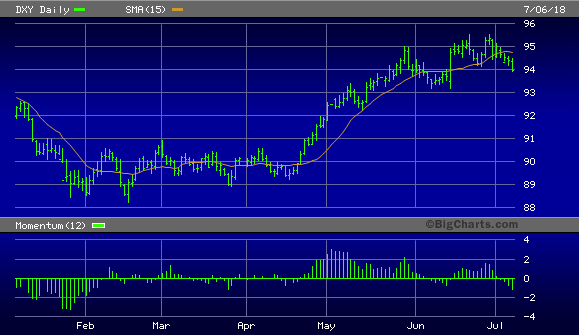 It's no coincidence that the dollar's pullback has occurred simultaneously with the latest bottoming attempt in the emerging markets. The iShares MSCI Emerging Markets ETF (EEM) is my proxy for this area, and as the following graph shows the emerging market stocks are making their first attempt at bottoming in over a month. The previous two attempts at establishing a low in the emerging market ETF failed, so perhaps this time will be the charm. Note in the graph shown here that unlike the previous two bottoming attempts in May and early June, EEM's 12-day price momentum indicator actually reached an "oversold" reading in late June. This increases the odds that a rally attempt in the coming days will actually succeed in getting EEM's price decisively above the 15-day moving average (below). More importantly, it should allow for a greater percentage gain in the event of a short-covering rally as the previous rally attempts were quite feeble due to the lack of a sizable short interest buildup. There should be no lack of short interest among the emerging market ADRs and funds this time around. 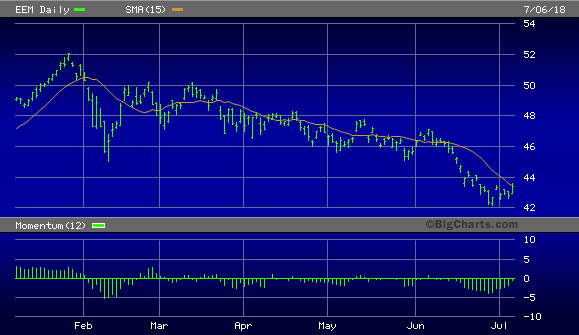 The fact that the catalyst for the U.S. stock market's weakness last month was so easy to identify is another reason why investors shouldn't fear the bear's return. As I've emphasized in previous commentaries whenever the major averages decline on a specific headline-related worry (assuming a bull market is underway), it's usually safe to assume that the market will rebound and recover its losses once the worry is faded. By contrast, whenever the market declines for no apparent reason, that's when you have to worry about the potential for an even bigger decline ahead.

This time around the catalyst for the late June pullback in the S&P 500 Index (SPX) was easy to identify, namely the "tariff tantrum". In the last two trading sessions the stock market has ignored the trade dispute between the U.S. and China, allowing the SPX to gain nearly 2% in the process. As the daily graph of the SPX illustrates (below), not only did the S&P stop short of violating its widely watched 200-day moving average, the benchmark index also closed decisively above its 15-day MA. This suggests the definite possibility that the index is about to rally back to the nearest pivotal chart resistance at about the 2,800 level (the early June high). 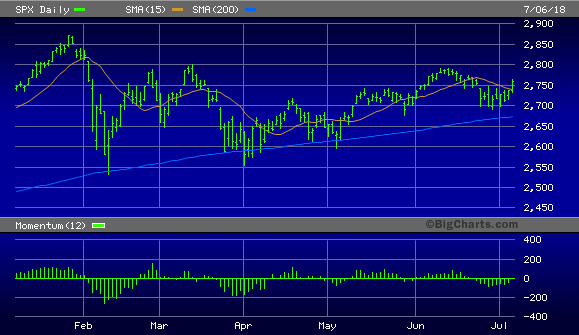 From here the most constructive thing we could see from a bullish perspective would be as follows:

Each of these three factors would strongly confirm that the bulls have finally regained control of the market's short-term trend after their five-month consolidation of the intermediate-term trend. For now investors should maintain intermediate-term long exposure to the stock market via ETFs and outperforming individual stocks in strong sectors. My continued preference is for tech sector stocks in the e-commerce sphere, which are showing unusual levels of relative price strength. This includes the First Dow Jones Trust Internet Index Fund (FDN), which is shown here compared with the S&P 500 (SPX) for reference. 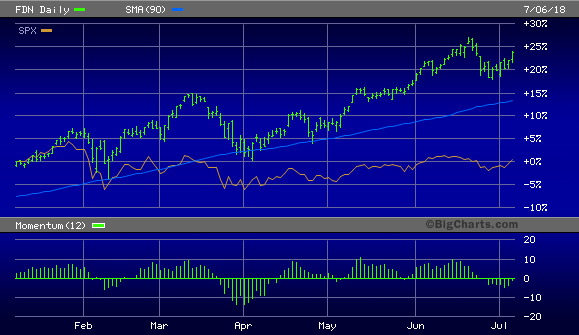 Investors should remain somewhat defensive until the three factors mentioned above take place. Now would also be a good time to prune portfolios by trimming losses among under-performing large cap stocks, raising stops on all long positions, and taking some profits on winners.