Painted Pony (OTCPK:PDPYF) focuses on the development of natural gas and NGL from the Montney formation in British Columbia. As shown on the picture below, the company has been rapidly growing its production, from 15,602 boe/d in 2015 to an estimated rate of 60,000 boe/d in 2018. 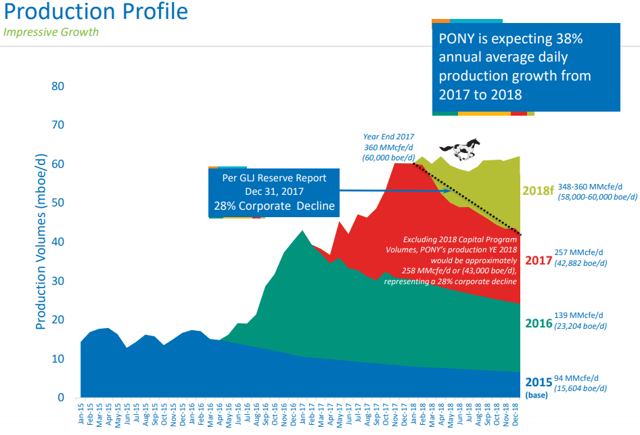 The share price has been taking the opposite direction, preferring to follow the AECO gas price evolution.

In this article, I describe the reasons for this contrast by having a closer look at the assets and production profile. I will then see if this situation creates an investing opportunity.

My reserves on reserves

The able below describes the reserves of the company ("Net" means after royalties).

With 1,148,833 Mboe of proved plus probable reserves, Painted Pony could produce at this pace during more than 50 years if the probable reserves materializes and if the company can deploy capital to develop these resources.

In May 2017, the company acquired UGR Blair Creek in an all-share deal representing C$220.2M. The acquisition increased the Montney acreage by 50% and added 8,500 boe/d to the production. The company now owns more than 200,000 acres.

The number of wells is summarized in the table below. However, the company does not communicate on the number of locations, which makes the value of the land more challenging to asses.

To summarize, Painted Pony owns large reserves and land relative to its production. However, the company will need some capital to develop and produce these assets. The big acquisition last year did not seem necessary: considering its production profile and its costs structure, the company did not need so much more land and reserves.

The table below compares the cash costs between Canadian gas producers.

Peyto (OTCPK:PEYUF) and Painted Pony both produce about 90% gas and 10% NGL. The companies are not identical, though: Peyto produces 60% more and is located in Alberta.

Coming back to Painted Pony costs, royalties are lower than the two other companies thanks to a royalty credit provided in British Columbia. The management indicated that royalties should be closer to C$0.08/mcfe for FY 2018.

Transportation costs should reach C$0.70 to C$0.75 for FY 2018 due to the marketing diversification: transporting gas to distant hubs costs more.

With a flat production and higher royalty and transport costs, cash costs would be higher for FY 2018, at about C$2.2/mcfe.

Assuming that PDP FD&A would stay stable in 2018, total costs to produce and replace the depleted production would amount to around C$2.2/mcfe + C$1.4/mcfe = C$3.6/mcfe. It means the company needs to realize a price of C$3.6/mcfe in order to profitably produce while replacing reserves.

As a comparison, the table below summarizes the realized prices for the past couple of years (in C$/mcfe).

Over the last few years, revenues could not reach C$3.6/mcfe. At these current gas prices, the company cannot profitably operate.

Painted Pony announced a PDP FD&A recycle ratio of 1.1x for 2017. It means that the company would generate 1.1x cash flows compared to the cash spent to find, develop and acquire the reserves being produced. In other words, the company will generate little return on the assets it found, developed and acquired, should the profile of the production and the costs stay the same.

In addition to the high costs structure and the worrying recycle ratio, the company seems to communicate aggressively. For instance, the slide below, from the June investor presentation, highlights a recycle ratio at 1.6x, which is better than the 1.1x I've just mentioned. The trick is that the "A" of "FD&A" is omitted. And "A" stands for acquisition. As a coincidence, the company has made an important acquisition in 2017. 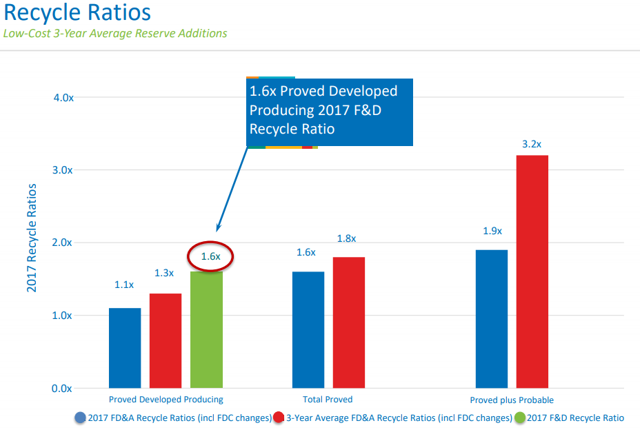 The correct metric to look at is the PDP FD&A, which is the blue bar at the left of the slide. Acquisitions constitute a real cost corresponding to the added PDP reserves.

Another example of the optimist communication appears on the slide below. We have seen that Painted Pony operates at elevated costs. Still, the slide below is entitled "Solid margins drive earnings". 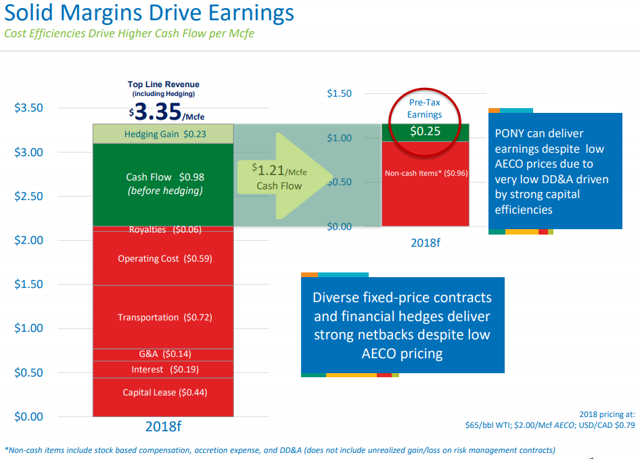 The company could indeed make an accounting profit, thanks to the depreciation and amortization that would be lower than the PDP FD&A costs in 2018. But invoking solid margins that drive earnings sounds very optimistic to me.

The slide below provides another rosy picture. Painted Pony appears as one of the most profitable gas producer in North America. While the company has indeed generated a profit in 2017, it was the first time since 2011, and it was due to hedging. During Q1 2018, the company went back to losses. 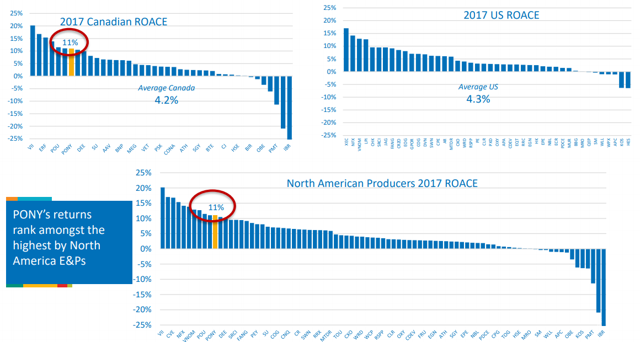 The table below describes the components of the net debt that amounts to $C396M.

As mentioned above, Painted Pony is using finance leases instead of owning processing assets. Finance leases should be considered as a debt and represent about C$490M.

The graph below shows the structure of the debt. We can notice the high cost of debt: for instance, the senior unsecured notes due 2022 offers an 8.5% coupon. 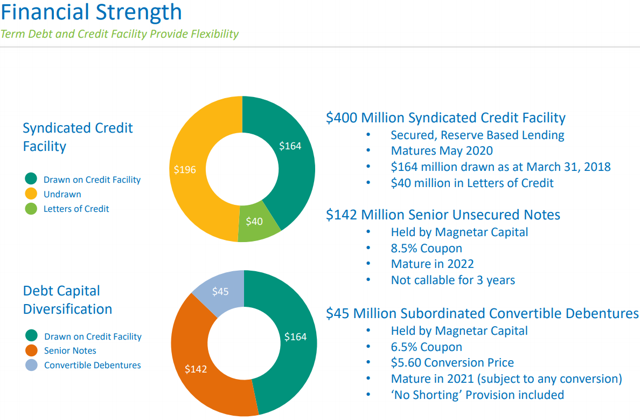 For 2018, the management has indicated that capital spending would stay within cash flow in order to stabilize the debt. 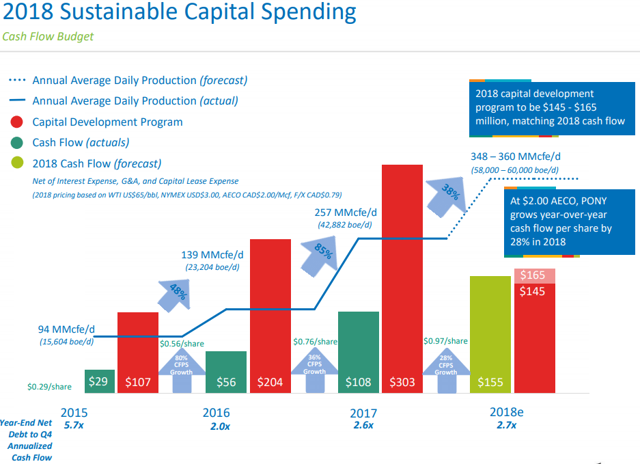 The debt should rise to 2.7x estimated 2018 cash flow, according to the graph. Adding the leasing, net debt to cash flow would gravitate at around 5x cash flow. Taking into account the lack of profit at these prices, the leverage seems quite worrying.

The remuneration of the management seems reasonable, relative to the size of the company. 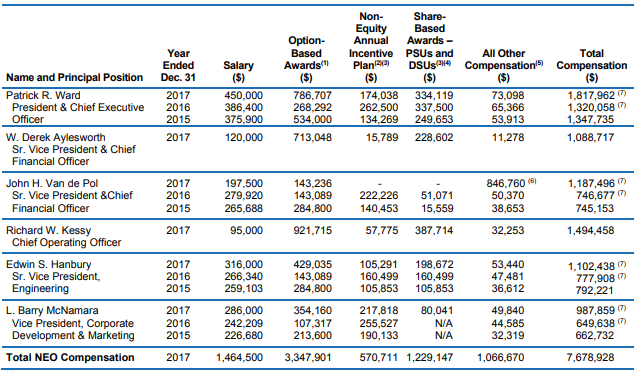 Painted Pony does not generate any free cash flow at these gas prices while keeping production flat. The company has been profitable only once since 2011. It needs higher sustained gas prices.

Therefore, Painted Pony is a proxy on the Canadian gas price, which is impossible for me to predict. In addition, considering the capital structure, the company must improve by 2020; the LNG projects will not be ready before the credit facilities and debt expire.

Based on this, I would not want to own the company. For the sake of the exercise, though, I provide some quick valuation based on flowing barrels.

Painted Pony has been rapidly growing its production and assets during the last few years. As a result, the company owns an important reserve base, but it would need additional capital to develop and produce these assets.

Moreover, at these gas prices, the company can not generate a profit while growing or even keeping production flat. Considering its costs structure, the company needs higher gas prices by 2020, before the credit facility expires.

For these reasons, I would not invest in the company.

Hervé Blandin
3.08K Followers
I leverage my 15-year career as an IT engineer to write mostly about tech stocks with a long-term perspective.Disclaimer: Anything I write isn't investment advice and will for sure contain errors and inaccuracies. Any investment decision you make should be based solely on your own research and judgment.
Follow

Disclosure: I am/we are long PEYUF. I wrote this article myself, and it expresses my own opinions. I am not receiving compensation for it (other than from Seeking Alpha). I have no business relationship with any company whose stock is mentioned in this article.