Editor's note: This article was originally published on July 9, 2018, by Menzie Chinn here. 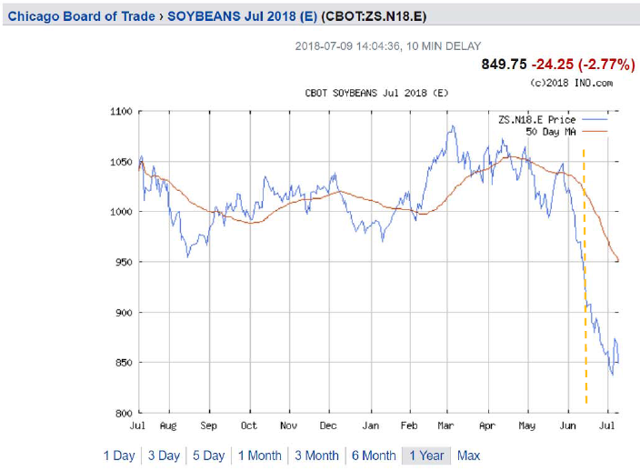 Soybean futures prices for July have been falling since early March, ever since Mr. Trump announced imminent Section 232 sanctions on steel and aluminum imports. Is the drop coincidental, weather/harvest condition-driven, or trade policy-driven?

The argument that it's primarily weather/harvest-driven is pushed by some who have pointed to the publication of WASDE on June 12 (orange dashed line); prices did indeed dive afterward. But they were falling before, as well. And they continued long after the publication of the USDA's World Agricultural Supply and Demand Estimates [WASDE].

Futures prices fell at the one-year horizon. Since soybeans can be stored for some time, it could be argued that the entire curve for futures should have shifted down, even if the weather or tariffs were considered to be temporary. 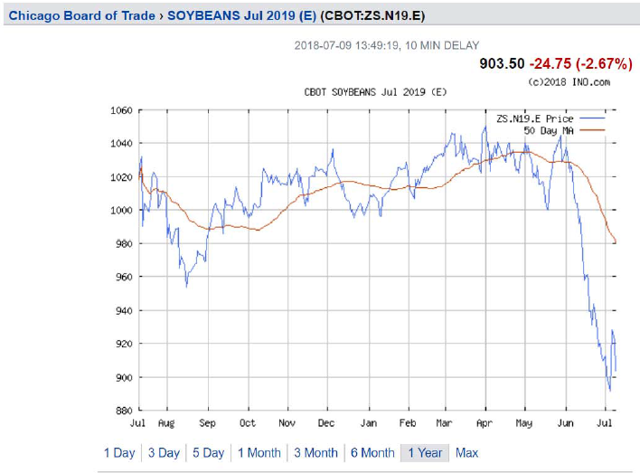 However, futures prices also fell at the two-year and three-year horizons. Now, soybeans are semi-storable commodities (although three years seems a little at the outer window for storing soybeans w/o too much loss to spoilage), so we could expect price effects for one or two years. 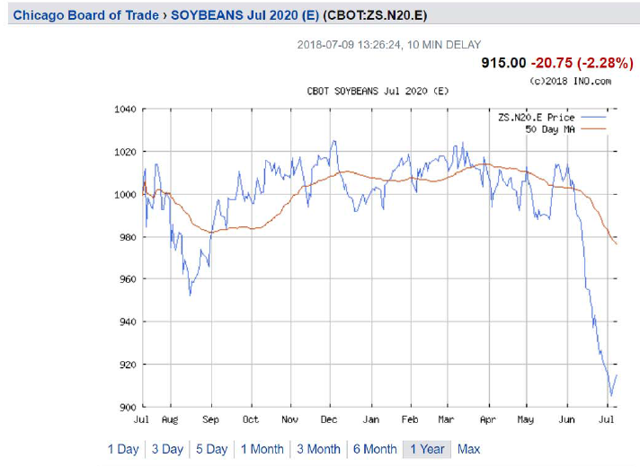 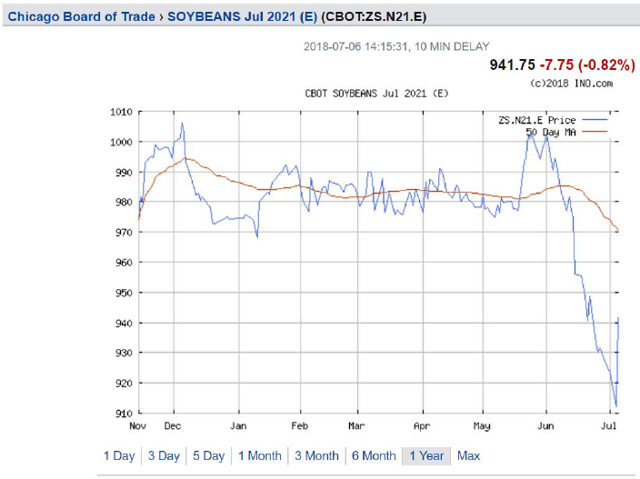 So, to summarize, we see a similar pattern in price drops, not necessarily associated directly with WASDE publication. What else is happening over this time? Well, we were bombarded with lots of additional news regarding the imposition of tariffs against soybeans.

In addition, we have a near-contemporaneous widening of the price differential between US and Brazilian soybean prices, as discussed in this post. Put the price decline over a set of longer time horizons, and a current widening of the US soybean (subject to tariffs)-Brazilian soybean (not subject to tariffs) spread, then the natural conclusion is that most of the price movements in front- and back-end futures are due to the increasing credibility afforded to a scenario involving the imposition of persistent trade tariffs, with potentially long-lived negative impacts.

But of course, we cannot definitively rule out the manipulation by: (1) the secret government/deep state, (2) or aliens, or (3) a conspiracy thereof.

Econbrowser
751 Followers
James D. Hamilton has been a professor in the Economics Department at the University of California at San Diego since 1992. He served as department chair from 1999-2002, and has also taught at Harvard University and the University of Virginia. He received a Ph.D. in economics from the University of California at Berkeley in 1983. Professor Hamilton has published articles on a wide range of topics including econometrics, business cycles, monetary policy, and energy markets. His graduate textbook on time series analysis has over 14,000 scholarly citations and has been translated into Chinese, Japanese, and Italian. Academic honors include election as a Fellow of the Econometric Society and Research Associate with the National Bureau of Economic Research. He has been a visiting scholar at the Federal Reserve Board in Washington, DC, as well as the Federal Reserve Banks of Atlanta, Boston, New York, Richmond, and San Francisco. He has also been a consultant for the National Academy of Sciences, Commodity Futures Trading Commission and the European Central Bank and has testified before the United States Congress. _________________________________________________ Menzie D. Chinn is Professor of Public Affairs and Economics at the University of Wisconsin’s Robert M. La Follette School of Public Affairs. His research is focused on international finance and macroeconomics. He is currently a co-editor of the Journal of International Money and Finance, and an associate editor of the Journal of Money, Credit and Banking, and was formerly an associate editor at the Journal of International Economics and the Review of International Economics. In 2000-2001, Professor Chinn served as Senior Staff Economist for International Finance on the President’s Council of Economic Advisers. He is currently a Research Fellow in the International Finance and Macroeconomics Program of the National Bureau of Economic Research, and has been a visiting scholar at the International Monetary Fund, the Congressional Budget Office, the Federal Reserve Board and the European Central Bank. He currently serves on the CBO Panel of Economic Advisers. With Jeffry Frieden, he is coauthor of Lost Decades: The Making of America’s Debt Crisis and the Long Recovery (2011, W.W. Norton). He is also a contributor to Econbrowser, a weblog on macroeconomic issues. Prior to his appointment at the University of Wisconsin–Madison in 2003, Professor Chinn taught at the University of California, Santa Cruz. He received his doctorate in Economics from the University of California, Berkeley, and his AB from Harvard University.
Follow
1 Comment
To ensure this doesn’t happen in the future, please enable Javascript and cookies in your browser.
Is this happening to you frequently? Please report it on our feedback forum.
If you have an ad-blocker enabled you may be blocked from proceeding. Please disable your ad-blocker and refresh.