Editor's note: Seeking Alpha is proud to welcome Saad Filali as a new contributor. It's easy to become a Seeking Alpha contributor and earn money for your best investment ideas. Active contributors also get free access to the SA PRO archive. Click here to find out more » 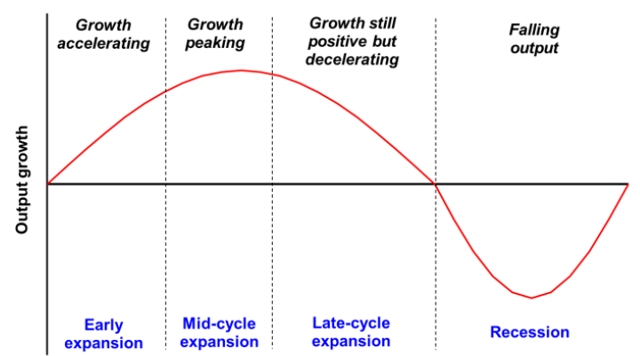 The current expansion and associated equity bull market has spanned for more than 9 years and the adage, “Bull markets/Expansions die of old age", is quite popular on Wall Street. My own research suggests expansions are murdered.

As the name of the article suggests, I will attempt to answer a question that is on everyone’s mind: Where are we in the business cycle? I will show that we are actually at worst in mid-cycle stage. In order to do this, I propose two statistical approaches that are fundamentally different. The first one is called K-Mean clustering and is explained in detail in the core of the article. It uses fundamental macroeconomic inputs. The second approach characterizes each cycle stage by a set of relationships using market derived inputs. As you will see, both methods, although fundamentally different given their respective inputs, lead us to the same conclusion. This highlights the robustness of the study.

If the cycle can be conceptually divided into 4 separate stages, then these stages ought to be partitioned into 4 separate clusters. The algorithm we will apply seeks to partition the data into separate clusters by maximizing the distance between the data points of two distinct clusters while minimizing the distance between the data points within an individual cluster. Distance here is defined by a Euclidian Norm, for two vectors:

The Set of coordinates in the chosen vector consists of Macro inputs that are conceptually and intuitively relevant to the determination of the debt and business cycles as they are broadly understood. We then compare the distance of current data to each cluster (by looking at the distance between our current set of data and the center or mean of each cluster) and choosing the one with the smallest distance in order to determine the current stage in the debt cycle. 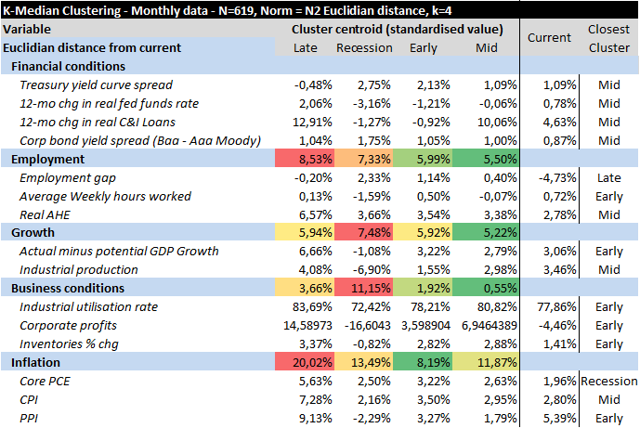 Click here for the model with all the sources and data. Statistical output done on IBM SPSS.

Thus, this analysis shows us that we are at worst only transitioning from mid to late and are still early stage by a lot of factors. A similar exercise with slightly different variables and settings is done by the HK-Monetary authority and ends up with similar conclusions.

If the color of the x day correlation matches that of the assets, then it means that we have entered late stage/near recession.

Below is a description of each relationship and why it characterizes late stage business cycle. 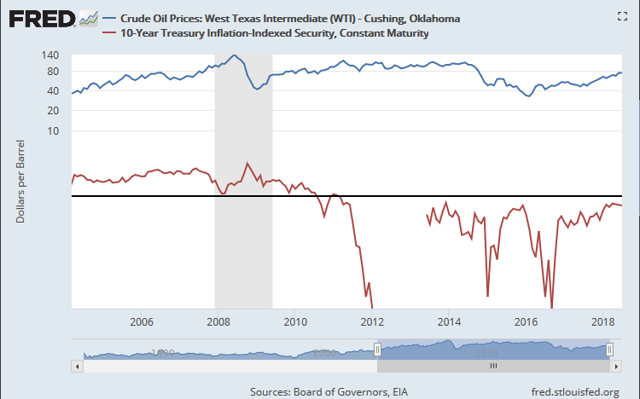 That is exactly what happened in 2008 where oil and TIPS moved in line until mid-2007 where oil kept going up and TIPS fell, Source: FRED

US HY & Oil: US high yield contains a lot of energy issues that are positively correlated to oil. In late stage, however, high input prices and tightening margins hurt the credit quality of the rest of the high yield universe. 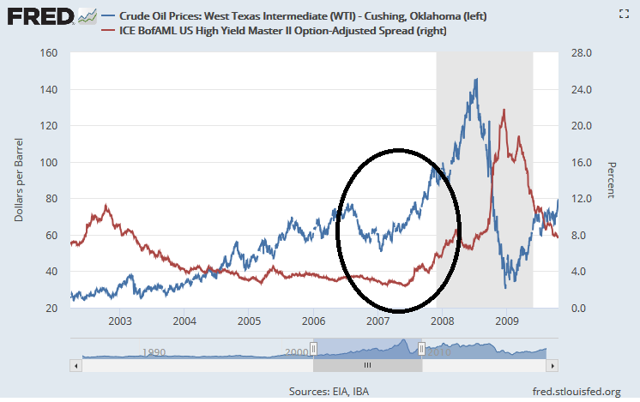 The GFC provides a clear example where the correlation was negative from 2003 to early/mid-2007 where HY spreads and oil started going up together. The GFC came 2 or 3 quarters later. Source: FRED

DXY, EM Spreads: In expansions, DXY and EM spreads are negatively correlated because investors engage in profitable carry trades and are happy to take on EM credit/currency risk. Any recovery in DXY is said to be part of broad US economy performance and tracked by even better EM performance. In the end, DXY goes up because of aggressive Fed hikes that prompt investors to disengage their carry trades and hurt EM credit. 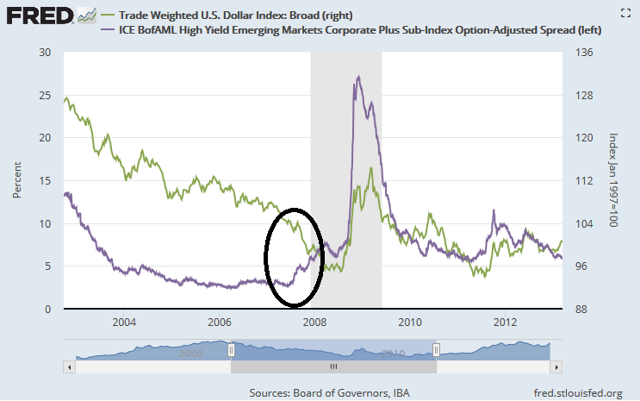 Near the GFC, DXY kept going down while EM spreads started creeping up, even though DXY and EM spreads were positively linked for a few years before. Source: FRED

S&P 500, US HY: Until the bond market smells credit issues, S&P 500 and US HY spreads go in opposite directions. Similar reasoning to the one above.

Short duration credit, longer duration credit: Throughout the cycle both spreads are driven by credit metrics, but near the end, duration becomes a differentiating factor that leads the latter to rally because of long-term expectations of Fed easing while the former suffers from the comparison to high cash yields. 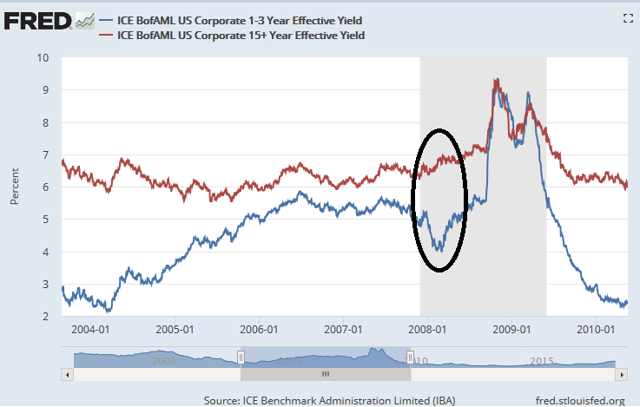 Example from the GFC: Although, eventually both spreads spiked to unprecedented levels given the severity of the GFC. Source: FRED

On the first approach:

On the second approach:

The robustness of the combined results satisfy me in that they leave very little doubt: The US economy is not nearing a recession that could cause a prolonged bear market. This bodes well for all risk assets and not just US assets specifically. Investors should stay long for a bit longer assuming my conclusions are true. Next we have to determine which assets are the best, being an equity index trader, I will be sharing my thoughts on which indexes should outperform in future articles.

Disclosure: I/we have no positions in any stocks mentioned, but may initiate a long position in SPY over the next 72 hours. I wrote this article myself, and it expresses my own opinions. I am not receiving compensation for it (other than from Seeking Alpha). I have no business relationship with any company whose stock is mentioned in this article.