Gold normally correlates negatively to the dollar, the USD/JPY FOREX ratio, and interest rates, while correlating positively to inflation expectations (as measured by TIP). Earlier this year (see here), the correlations of gold with interest rates and inflation reversed, while the correlation with currencies remained normal. In May, gold had returned to normal correlations, but recently it has, once again, decoupled from its normal trading patterns.

Below, is gold’s trading relative to the dollar and all three parts of the interest rate curve.

The dollar continues its negative correlation with gold, and if it breaks higher (~95), or forms a reverse head-and-shoulders before moving higher, then gold will continue to come under pressure.

The correlation with long-rates, which has once again turned positive, should revert to the mean (negative) eventually. It can do this in two ways: gold rising as long-rates continue to drop, or gold continues to drop as rates start rising. Since we think that rates have an upward bias, the latter scenario seems more likely.

Like the dollar, the USD/JPY FOREX pair continues with its negative correlation to gold. Technically, the currency pair is over-bought (stochastic) which, although it can remain elevated for some time, is likely to support a bounce in the gold price (chart below). 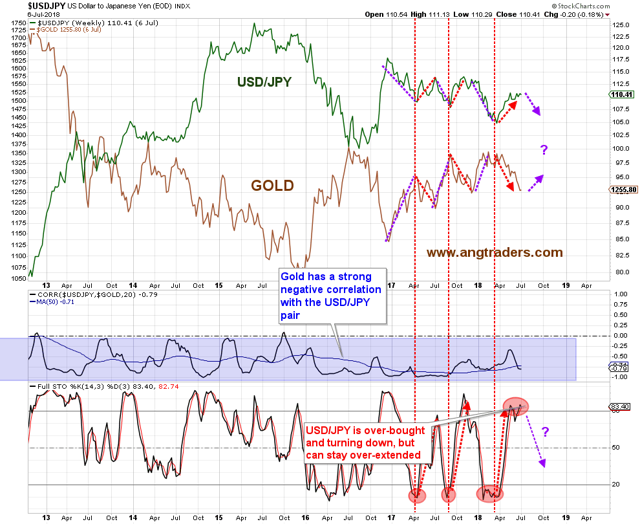 The trading of gold, relative to the inflation expectations as measured by TIP (inflation protected Treasury ETF), is completely “out-of-whack”. The divergence and resulting negative correlation are note-worthy. As is the similarity in the trading patterns of the second half of 2016, and today’s trading patterns (purple dashed channel-lines on chart below). In the fall of 2016, gold dropped 15% after correlating negatively with TIP. So far, gold has fallen 8% and may have more to go since the correlation is once again negative, which could drive gold much lower (chart below). 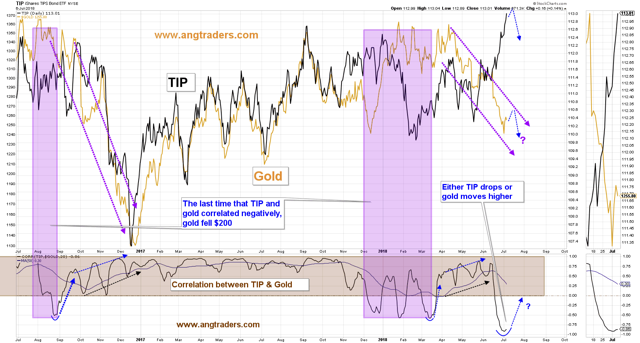 Technically, gold is over-sold which is likely to push the current bounce higher, but we doubt it will go much higher than $1270 before continuing its downtrend.

ANG Traders
3.72K Followers
Author of Away From The Herd
An MMT-based analysis of the equity markets
I have a degree in Math and Science from the University of Toronto, as well as a degree in education, also from U of T.

Disclosure: I am/we are long GLL. I wrote this article myself, and it expresses my own opinions. I am not receiving compensation for it. I have no business relationship with any company whose stock is mentioned in this article.