Much attention has been drawn to small caps by top tier media since the small cap premium is now the biggest in eight years and the fifth biggest in history. The outperformance of the small cap stocks versus the large caps is being driven by the current economic environment of growth, rising interest rates, inflation and the dollar. Also, Trump's tax policy and news around rising tariffs and trade tensions are helping small caps as more of their revenue is generated domestically.

However, it's not only where in the world small caps generate revenue from that matters, it is that the small caps have earnings. Just as in the methodology of the S&P 500, the S&P SmallCap 600 has the same financial viability eligibility criteria that states the sum of the most recent four quarters' as-reported earnings should be positive as should the most recent quarter. This basic quality rule is vital to earning the small cap premium as discussed here in detail, and shown below where since inception of the S&P 600, only it has outperformed the large caps while the Russell 2000 has performed similarly to both the S&P 500 and Russell 1000: 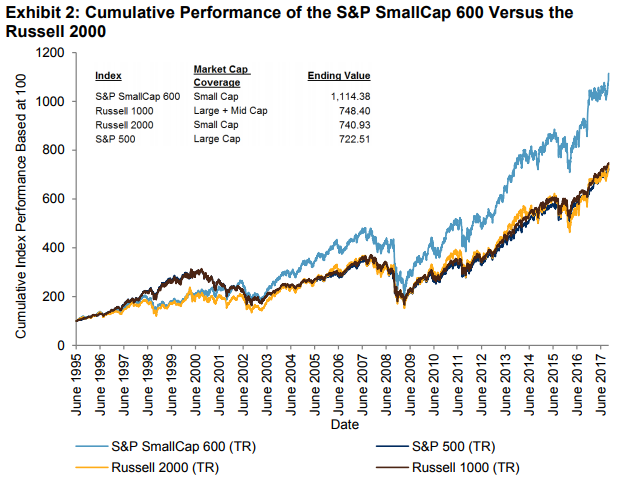 Source: S&P Dow Jones Indices LLC. Data from June 1, 1995, to Sept. 29, 2017. Index performance based on total return in USD. Past performance is no guarantee of future results. Chart is provided for illustrative purposes.

Here are two separate examples from articles where this has been published:

SIZING UP SMALL CAPS: A Tale of Two Indexes Small-cap investors may be measuring their performance against the wrong benchmark

"The most commonly used benchmark is the Russell 2000, and over 90% of investment funds focusing on U.S. small-cap stocks use it to peg their performance. But for more than two decades, it consistently has done worse than the lesser-known S&P SmallCap 600 index…"

Are you following the wrong small-cap index?

The widely-tracked Russell 2000 has done well, but not as well as a rival benchmark

"Small companies are setting a record pace on Wall Street this year, but many investors are missing out on the cream thanks to a divergence between the two main benchmarks that define the sector for fund managers…"

In addition to the basic earnings screen that has enabled the S&P 600 to deliver the small cap premium through time, there is one more reliable contributor to the S&P 600's outperformance over the Russell 2000, and it happens in July.

According to Big Things Come in Small Packages: Looking Into the S&P SmallCap 600 by Gunzberg and Glawe:

The other key methodology difference that drives the outperformance of the S&P SmallCap 600 versus the Russell 2000 is the annual reconstitution effect that dilutes Russell 2000 returns. It, too, has been well documented, not only in a report by S&P Dow Jones Indices13
showing the significant t-stat of the return difference of the indices, but also by several other well-known researchers.

As winners from the Russell 2000 graduate to the Russell 1000, and losers from the Russell 1000 move down to the small-cap index, fund managers are forced to sell winners and buy losers, thereby creating a negative momentum portfolio.14 Jankovskis15 and Chen, Noronha, and Singal16 estimated that the predictable nature of the June Russell rebalancing process biases the return of the index downward by an average of approximately 2% per year. Similarly, Chen, Noronha, and Singal found the rebalancing impact to be 1.3% per year. 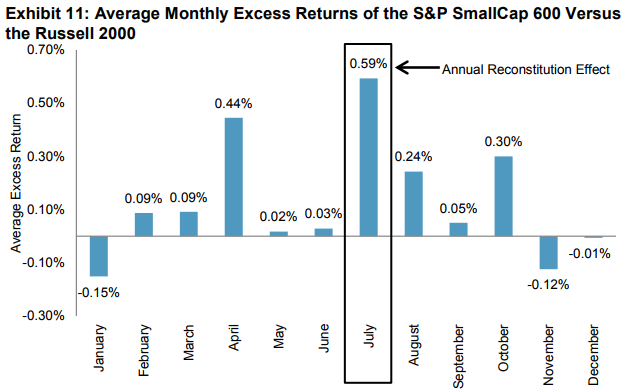 Source: S&P Dow Jones Indices LLC, Russell, FactSet. Data from 1994 through 2016. Past performance is no guarantee of future results. Chart is provided for illustrative purposes and reflects hypothetical historical performance. Please see the Performance Disclosure at the end of this document for more information regarding the inherent limitations associated with back-tested performance.

S&P Dow Jones Indices
2.05K Followers
At S&P Dow Jones Indices, our role can be described in one word: essential. We’re the largest global resource for index-based concepts, data and research, and home to iconic financial market indicators, such as the S&P 500® and the Dow Jones Industrial Average®. More assets are invested in products based upon our indices than any other index provider in the world; with over 1,000,000 indices, S&P Dow Jones Indices defines the way people measure and trade the markets. We provide essential intelligence that helps investors identify and capitalize on global opportunities. S&P Dow Jones Indices is a division of S&P Global, which provides essential intelligence for individuals, companies and governments to make decisions with confidence. For more information, visit www.spdji.com.Copyright © 2016 S&P Dow Jones Indices LLC, a division of S&P Global. All rights reserved. This material is reproduced with the prior written consent of S&P DJI. For more information on S&P DJI please visitwww.spdji.com. For full terms of use and disclosures please visit www.spdji.com/terms-of-use.
Follow