The latest issue of the NFIB Small Business Economic Trends came out Tuesday morning. The headline number for June came in at 107.2, down 0.6 from the previous month. The index is at the 99th percentile in this series. Tuesday's number came in above the Investing.com forecast of 105.6.

Here is an excerpt from the opening summary of the news release.

The Small Business Optimism Index posted its sixth highest reading in survey history for the month of June, at 107.2, down 0.6 from May. Since December 2016, the Index has averaged an unprecedented 105.4, well above the 45-year average of 98 and rivaling the all-time high of 108.0 in July 1983.

"Small business owners continue to report astounding optimism as they celebrate strong sales, the creation of jobs, and more profits," said NFIB President and CEO Juanita Duggan. "The first six months of the year have been very good to small business thanks to tax cuts, regulatory reform, and policies that help them grow."

The first chart below highlights the 1986 baseline level of 100 and includes some labels to help us visualize that dramatic change in small-business sentiment that accompanied the Great Financial Crisis. Compare, for example, the relative resilience of the index during the 2000-2003 collapse of the Tech Bubble with the far weaker readings following the Great Recession that ended in June 2009. 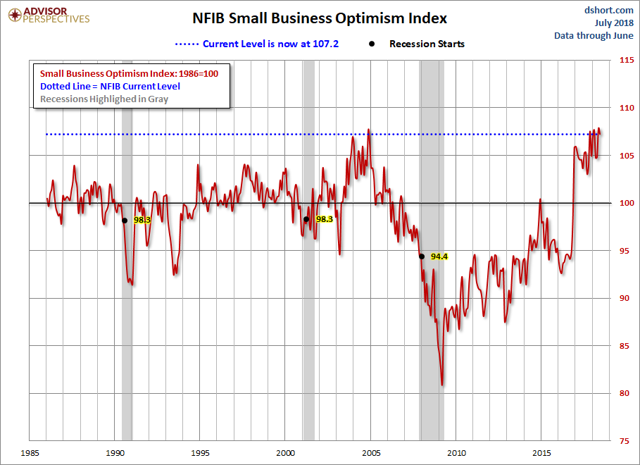 Here is a closer look at the indicator since the turn of the century. We are just below the post-recession high. 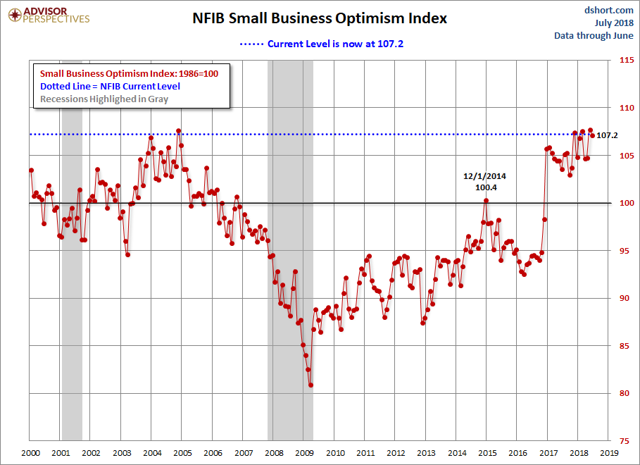 The average monthly change in this indicator is 3.0 points. To smooth out the noise of volatility, here is a 3-month moving average of the Optimism Index along with the monthly values, shown as dots. 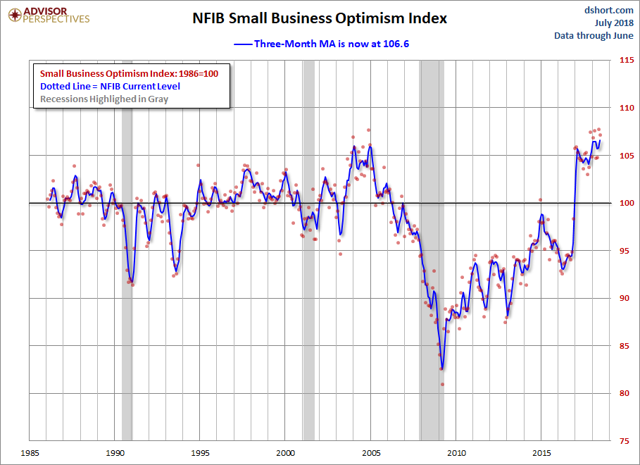 Here are some excerpts from the report.

Reports of employment gains remain strong among small businesses. Owners reported adding a net 0.19 workers per firm on average, virtually unchanged from May and a good number.

How effective has the Fed's monetary policy been in lifting inflation to its two percent target rate?

The net percent of owners raising average selling prices fell 5 points to a net 14 percent seasonally adjusted. Unadjusted, 9 percent of owners reported reducing their average selling prices in the past three months (up 3 points), and 25 percent reported price increases (down 3 points). Inflation does not appear to be a threat in the current environment.

Has the Fed's zero interest rate policy and quantitative easing had a positive impact on Small Businesses?

Three percent of owners reported that all their borrowing needs were not satisfied, down 1 point and historically low. Thirty percent reported all credit needs met (down 7 points) and 54 percent said they were not interested in a loan, up 11 points. These are extreme movements, and the July figures are likely to be an average of May and June.

This month's "Commentary" section includes the following observations and opinions:

Main Street is getting the good news first hand - higher sales, more profits, opportunities to expand and grow. They see at street level the successes being achieved in the economy that news programs don't cover nearly enough. Record numbers see the current period as a good time to expand operations and are trying to hire more workers. Capital spending is at levels not seen in a decade. Regulatory burdens are being reduced. Small business owners are focusing on what really matters and moving the economy forward. Economic growth will be solid through the end of the year on Main Street.

The next chart is an overlay of the Business Optimism Index and the Conference Board Consumer Confidence Index. The consumer measure is the more volatile of the two, so it is plotted on a separate axis to give a better comparison of the two series from the common baseline of 100. 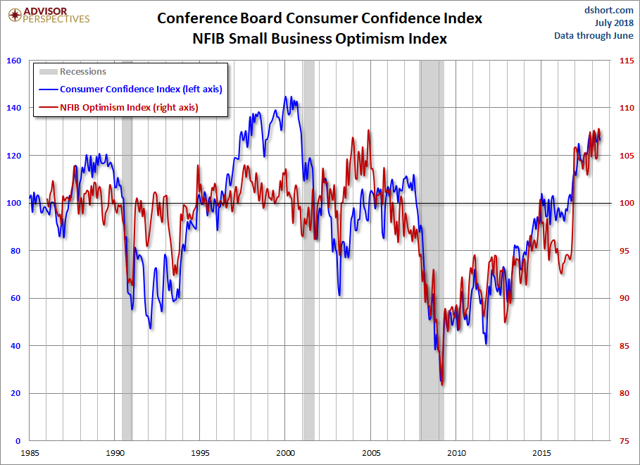 These two measures of mood have been highly correlated since the early days of the Great Recession. The two diverged after their previous interim peaks, but have recently resumed their correlation. A decline in Small Business Sentiment was a long leading indicator for the last two recessions.