It’s on! The multi-front trade war that neither exporters nor importers wanted is heating up. While the U.S. stock market has shrugged it off so far, agricultural commodities affected by China’s 25% retaliatory import tariffs have not. Since China’s announcement of these tariffs in April, wheat lost 16%, corn tumbled 18%, and soybeans got crushed, free-falling 21% into bear market territory.

The first consequence is the price of Brazilian soybeans. They are trading for a roughly $1.80 per bushel premium to American soybeans – a difference of…wait for it…21%. The Chinese are still paying what they would have paid for soybeans if they hadn’t imposed a retaliatory tariff, but that cash is going to Brazil rather than the United States. 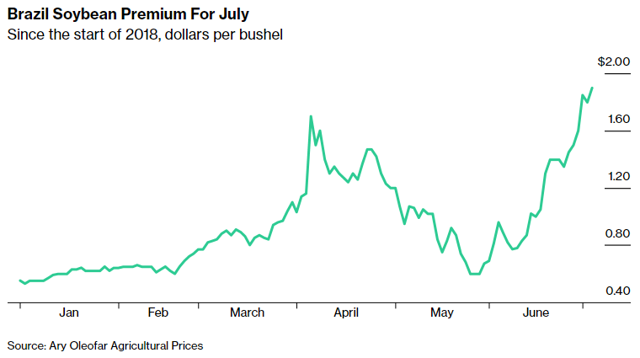 This arrangement is working for China now because Brazil has plenty of beans to sell following their recent harvest. But China’s demand for soybeans means Brazil cannot satisfy that demand alone. It will eventually need to turn to the U.S. or a U.S. proxy. This is something the bulls may be able to hang their hats as the North American harvest approaches. 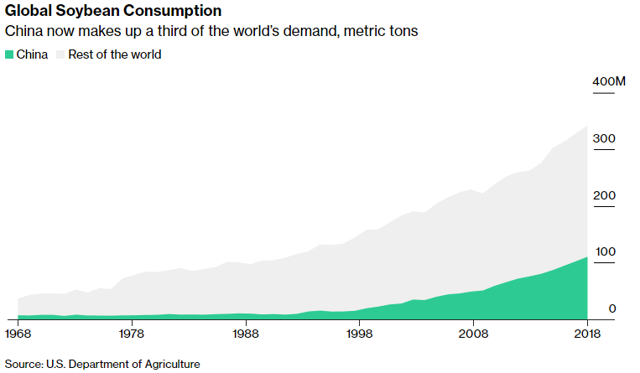 Soybeans make up 60% of all American agricultural exports to China. The combined export value of U.S. corn, soybeans and wheat dropped by $13 billion, or roughly 10% in June during the worst of the recent declines. Some analysts estimate that a continuation of the 25% tariffs on soybean imports could result in an average 87% drop in income for medium-sized farms. This would come on top of a series of losing years that has seen farmer suicides soar to record highs due to low prices for agricultural commodities.

Donald Trump won the presidency largely on support from the American heartland. Mr. Trump is also very politically savvy. He knows he cannot execute his agenda without the House of Representatives, and he cannot win the House and keep the Senate without the overwhelming support of farmers and rural America. Recent polls show that, for the most part, rural America still supports Mr. Trump and the Republicans. But there are signs that enthusiasm is starting to slip.

Failure to reverse the downward course of grain prices between now and harvest could cause many farmers to stay home on Election Day. The GOP needs overwhelming support in rural America. It’s why we expect either some kind of deal with China or some kind of price support to emerge within the next six weeks. A deal, should it occur, has the potential to be extremely bullish – especially considering today’s bargain basement prices.

Soybeans recently made 10-year lows, dropping briefly below long-term support at $8.50 per bushel before climbing back above it. There is a reason this level has held up so well over the past decade. $8.50 is roughly the cost to produce a bushel of soybeans. (It’s more in some areas and less in others due to fluctuating land costs.) What the chart below tells us is prices above $8.50 per bushel are needed to keep farmers in business and the market supplied, tariffs or no tariffs.

With 21% of 25% of China’s retaliatory tariffs already priced into the market, soybeans are cheap and offer patient speculators a rare opportunity to position themselves for potentially a substantial rebound. We believe the time to take a bullish flyer on this formerly high-flying market is now. Our target is a rebound to June 2016 highs just north of $12.00 per bushel sometime in the next 16 months.

The risk of loss in trading futures and/or options is substantial and each investor and/or trader must consider whether this is a suitable investment. Past performance, whether actual or indicated by simulated historical tests of strategies, is not indicative of future results. Trading advice is based on information taken from trades and statistical services and other sources that R.J. O'Brien believes are reliable. We do not guarantee that such information is accurate or complete and it should not be relied upon as such. Trading advice reflects our good faith judgment at a specific time and is subject to change without notice. There is no guarantee that the advice we give will result in profitable trades.