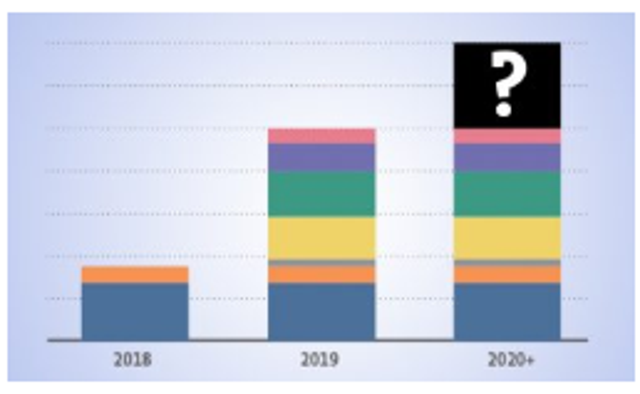 Last year, the US was one of 19 countries exporting liquefied natural gas (LNG) and played a relatively small role in the global market. To be precise, LNG exports from the US represented just 5% (1.9 Bcf/d) of the 38.2 Bcf/d global LNG market. That said, the US is on the brink of adding significant LNG export capacity next year and becoming a sizable player in the global LNG market. As an indication of the rising significance of the US, the World Gas Conference was held in Washington, D.C., last month. This was the first time in thirty years that the conference - which takes place every three years - was hosted in the US.

Today, we look at the LNG capacity additions slated for 2019. We also discuss the global backdrop for US LNG exports, including concerns for a potential supply gap in the mid-2020s and what US projects are currently on the drawing board to potentially help fill that gap. We also look at the potential implications for LNG exports in light of the ongoing trade dispute with China. Next week, in part 2, we'll look at the broader benefits of LNG exports for the energy space, particularly midstream.

US LNG export capacity to dramatically increase next year.

Today, operating US LNG export capacity is limited to Cheniere's (LNG, CQP, CQH) Sabine Pass terminal in Louisiana and Dominion Energy's (D) Cove Point terminal in Maryland, which shipped its first cargo earlier this year. By the end of next year, though, LNG export capacity is expected to jump to 10 Bcf/d as shown below. All this capacity will be added in Texas and Louisiana, except for Kinder Morgan's (KMI) Elba Island facility on the coast of Georgia. The added capacity in the US will be a significant increase for the global market, but it likely will only put a dent in the world's growing appetite for LNG. 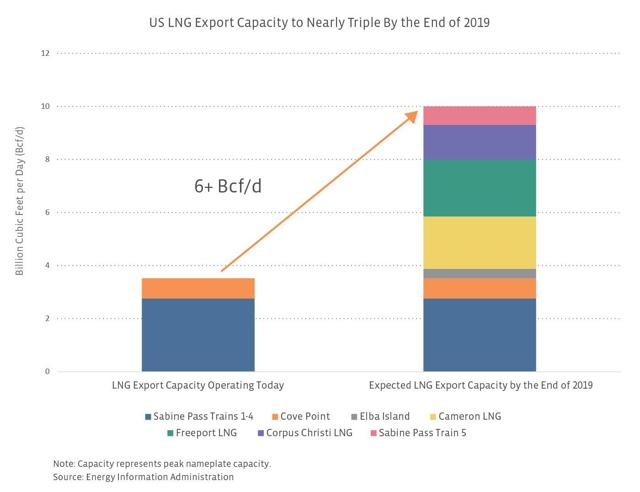 Is a global supply gap looming, and how could the US help fill the gap?

Shell (RDS.A) (RDS.B) has highlighted the potential for a supply gap in the LNG market in the mid-2020s in the slide below from its LNG Outlook 2018. The chart on the right shows the dearth in final investment decisions1 (FID) for adding liquefaction capacity globally in 2016-17. For its part, the US did not have any FIDs in these years. Cheniere's FID for Train 3 at Corpus Christi (0.7 Bcf/d of capacity) in May was the first FID for liquefaction capacity in the US since 2015. The concern is that the lack of FIDs in recent years will lead to insufficient supply in the 2020s. 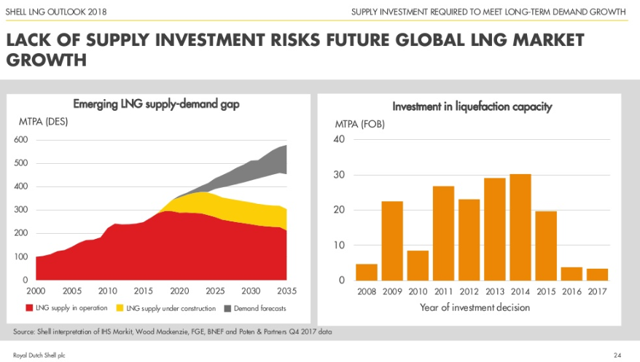 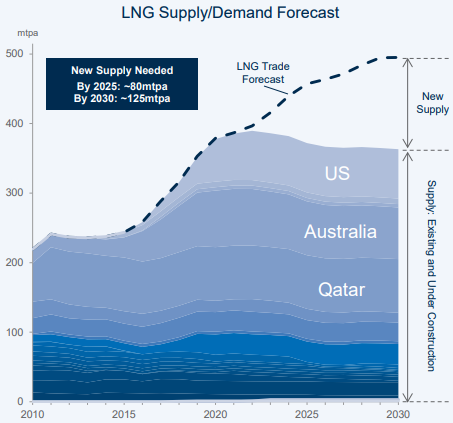 There are several expansions and new projects on the drawing board in the US that could help fill this supply gap. Some projects expected to come online in 2019 could add trains2 in the future. In addition to Train 3 at its Corpus Christi terminal, Cheniere has proposed seven additional midscale trains at Corpus Christi and also has the necessary permits to add a sixth train at Sabine Pass (0.7 Bcf/d of capacity). Sempra Energy's (SRE) joint venture Cameron LNG project has received regulatory approval for two additional trains (1.4 Bcf/d of capacity). Freeport LNG has applied for FERC approval to build and operate a fourth train (0.7 Bcf/d of capacity). Aside from expansions, there are projects that have been fully approved but have not reached FID including Energy Transfer's (ETE, ETP) Lake Charles LNG, Exxon's (XOM) Golden Pass LNG joint venture with Qatar Petroleum, and Magnolia LNG. 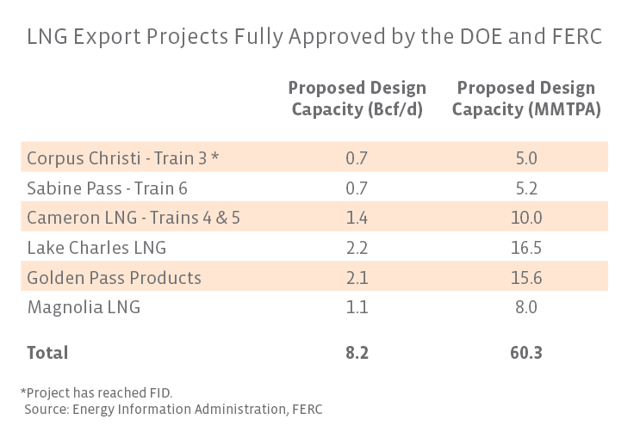 There are several more LNG export projects that have been proposed to the Federal Energy Regulatory Commission (FERC), which oversees the siting and construction of LNG export facilities. Notable proposed projects include Sempra's Port Arthur LNG, which announced a 20-year contract with Polish Oil & Gas last month. The project has not reached FID but is expected to begin exporting LNG in 2023. Also on the list, Tellurian's (TELL) Driftwood LNG is expected to begin operations in 2023 and to have a total capacity of 27.6 million tons per annum (MMTPA), which equates to nearly 4 Bcf/d.

Clearly, projects will need to reach FID and begin construction if they are to help fill the potential LNG supply gap. Before reaching FID, companies will want to have financing decided and commercial contracts in place covering the capacity (in other words, assurance of sales). Shell has attributed the lack of FIDs to a disconnect between buyers that prefer short-term contracts or spot deliveries without a contract and LNG suppliers that want long-term contracts to support the hefty investment in liquefaction capacity. While this is an issue facing LNG projects globally, US trade policy is a potential obstacle specific to projects in the US.

What are the implications of the trade dispute with China?

Thus far, LNG exports have not been targeted by China in the ongoing trade dispute between the US and China. China led global growth in LNG imports last year, increasing its imports by 1 Bcf/d to become the world's second-largest LNG importer behind Japan. China alone accounted for 44% of the global increase in LNG imports in 2017. If LNG exports were to come under fire in the trade dispute, it would likely be a negative for LNG projects in the US looking to secure future sales contracts with Chinese customers. Already, some commercial agreements may be on hold until there is more visibility, likely delaying additional FIDs. That said, it's worth noting that 40 countries imported LNG last year, and the US exported LNG to 25 different countries. While China is a major player in the LNG market, it's not the only customer. As highlighted by the contract inked by Port Arthur LNG, Europe is clearly a market for US LNG exports as countries look to diversify their gas supply from Russia.

Stay tuned for next week!

We've barely scratched the surface in global LNG markets, neglecting planned projects in other parts of the world to specifically focus on the US. Clearly, these projects will compete with the US, and US projects will compete against each other. Stay tuned for next week as we discuss the broader benefits of US LNG exports for midstream companies and gas producers.

1 In other words, final investment decisions represent a company’s commitment to move forward with a project.

2 When discussing LNG, trains are the industrial facilities that cool natural gas into LNG.

Disclosure: © Alerian 2018. All rights reserved. This material is reproduced with the prior consent of Alerian. It is provided as general information only and should not be taken as investment advice. Employees of Alerian are prohibited from owning individual MLPs. For more information on Alerian and to see our full disclaimer, visit http://www.alerian.com/disclaimers

Stacey Morris is the Associate Director of Marketing at Alerian, which equips investors to make informed decisions about Master Limited Partnerships (MLPs) and energy infrastructure. Ms. Morris engages with the investment community to increase awareness of the Alerian Index Series and support broader understanding of the role that midstream assets play in North American energy markets. Ms. Morris was previously the Investor Relations Manager for Alon USA Energy, overseeing investor communications for the corporation and its variable distribution MLP, Alon USA Partners. Prior to Alon, she covered the integrated majors and refiners at Raymond James as a Senior Associate in the firm’s Equity Research Division. Ms. Morris graduated summa cum laude with a Bachelor of Science in Business Administration from Stetson University, and is a CFA charterholder.

Alerian and S-Network Global Indexes
3.51K Followers
Alerian is now VettaFi! VettaFi, a data, analytics, and thought leadership company, is transforming financial services from an industry to a community—one relationship at a time. In addition to providing interactive online tools and research, VettaFi offers asset managers an array of indexing and digital distribution solutions to innovate and scale their businesses. With $14 billion in assets benchmarked to its indexes – and more than 200 customers globally – asset managers look to VettaFi for benchmarks and best-in-class index solutions at competitive prices.
Follow
7 Comments