What effect is the tit-for-tat trading of tariffs between the U.S. and China having upon the world's two largest trading partners economies? 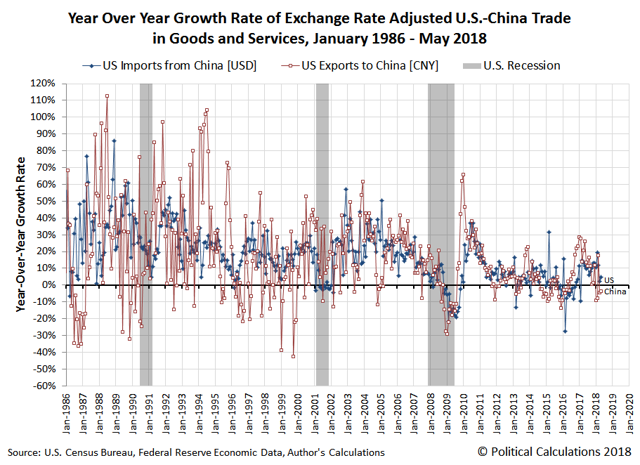 The key takeaway from this chart is the negative year-over-year growth rate of U.S. exports to China and the single-digit growth rate of Chinese exports to the U.S., which has continued for the second month. This continued negative trend represents the largest negative adjustment outside of the seasonal impact of the variable timing of China's week-long Spring Festival Golden Week holiday in the year-over-year data, which was responsible for the negative growth rates recorded for U.S. exports to China earlier in 2018. 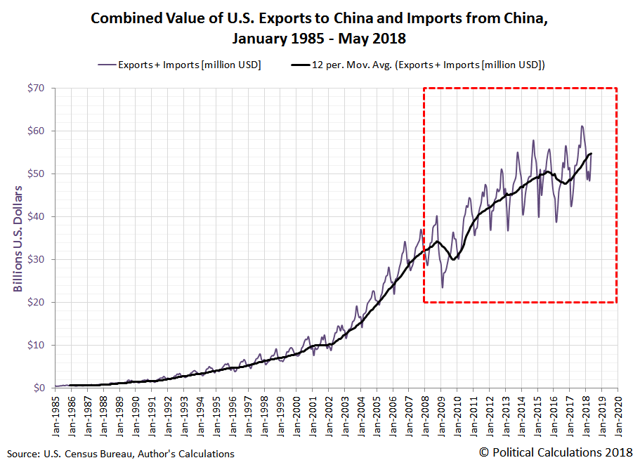 Let's next zoom in on the period covered by the dashed red box in the upper right-hand corner of this chart, which covers the last decade. 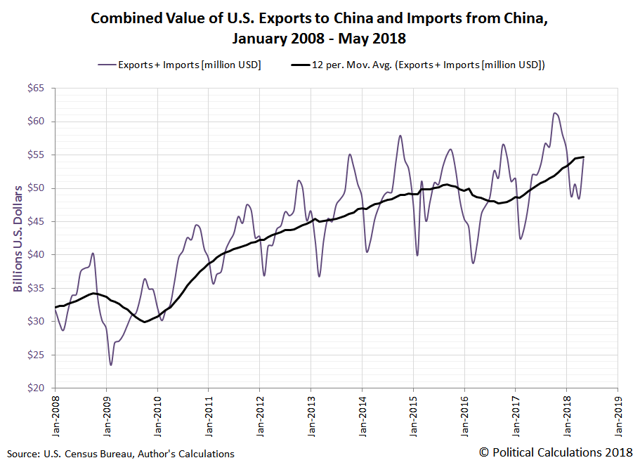 Here, we can see the deceleration as a downward shift in what had been a robust upward trajectory for the trailing-year average of the total value of goods and services traded between the U.S. and China. While not yet negative, the deceleration taking place now is similar to the patterns that were observed back in October 2008 as the U.S. economy was reaching the most negative growth period of the Great Recession, and also in August 2015, when the negative impact of China's political leadership's 2013 decision to slow down the growth of China's economy began to be evident in the international trade data with the U.S.

Ironman at Political Calculations
2.22K Followers
Ironman is the alias of the blogger at Political Calculations, a site that develops, applies and presents both established and cutting edge theory to the topics of investing, business and economics. We should acknowledge that Ironman is either formerly or currently, and quite possibly, simultaneously employed as some kind of engineer, researcher, analyst, rocket scientist, editor and perhaps as a teacher of some kind or another. The scary thing is that's not even close to being a full list of Ironman's professions and we should potentially acknowledge that Ironman may or may not be one person. We'll leave it to our readers to sort out which Ironman might behind any of the posts that do appear here or comments that appear elsewhere on the web!
Follow
3 Comments
To ensure this doesn’t happen in the future, please enable Javascript and cookies in your browser.
Is this happening to you frequently? Please report it on our feedback forum.
If you have an ad-blocker enabled you may be blocked from proceeding. Please disable your ad-blocker and refresh.