In the 1960’s, the slogan “Make Love, Not War” became a rally cry for anti-war protestors, but also typified their free love expression. They used the slogan to explain the harshness of the situation in Vietnam and to be countercultural to the capitalist and traditional way of life they saw in American society. While this was countercultural for its time, a recent Goldman Sachs piece titled “Why Technology is not a bubble” shows how today’s circumstances are contrary to rationale.1 Their work shows a contrast between the pricing of stocks to the economic value of populations. It is our opinion that this looks to be extreme. As we unpack this contrast, we will learn the hippies of the 60’s were only partly right. They were right about war. However, for today’s venture capitalists and technology investors, making love would be a waste of time relative to global dominance via the capitalization of individual stocks. Future world tyrants, take heed. 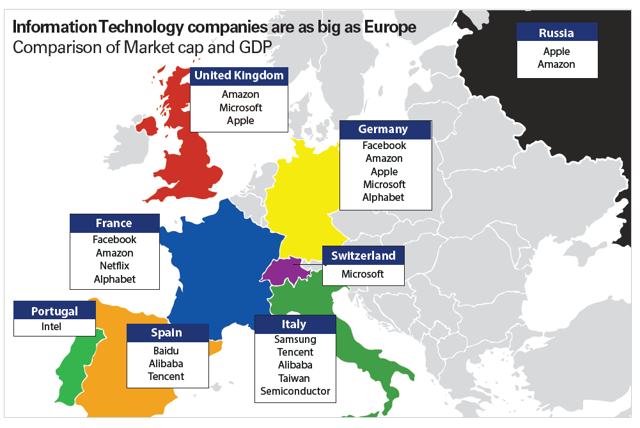 Invert, always invert: Turn a situation or problem upside down. Look at it backward. What happens if all our plans go wrong? Where don't we want to go, and how do you get there? Instead of looking for success, make a list of how to fail instead - through sloth, envy, resentment, self-pity, entitlement, all the mental habits of self-defeat. Avoid these qualities and you will succeed. Tell me where I'm going to die, that is, so I don't go there. - Charlie Munger

In most cases war tackles the conquering of people and land. To invert as Munger recommends, we took a keen interest in two charts from Goldman Sachs comparing the Gross Domestic Product (NYSEMKT:GDP) of various countries of Europe to the market capitalization of technology stocks today. 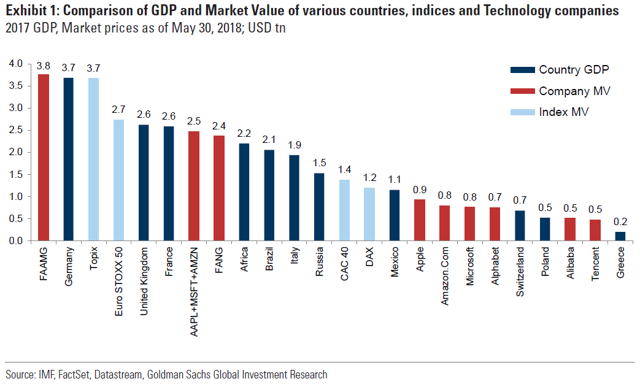 On its face, this picture should cause an investor to think and begin to invert today’s circumstances. Would someone want to own all of Facebook, Amazon, Netflix and Alphabet or would they rather own the year’s income for the entire country of France? This highlights how large the market capitalizations of certain global technology companies are. Why would the tyrant of the future need to take over land and people when they could do it in a non-hostile fashion via stocks?

In the bar chart above, Goldman Sachs broke out the disconnection of the market cap of these global tech companies, relative to European countries and their stock markets. The simplest way of inverting this, as Charlie Munger would say, is to ask the question, which would be more valuable for us economically? Would we rather own Facebook, Amazon, Apple, Microsoft and Google together, or would we rather gain all the economic income from Poland, Switzerland, Mexico and Russia in the next 12 months? It’s just like the Aflac (NYSE:AFL) commercials. The nice thing about income is that it’s not dependent on valuations. As Yogi Berra said, "they give you cash, which is just as good as money.”

Another way to look at this is to focus on large Asian technology stocks that are glamorous today. Would you rather have the entire income of Spain next year than Baidu, Alibaba and Tencent? We make few assumptions about the future to understand the income of Spain next year. In the valuation of these Chinese internet companies, there are more factors or inputs that we’d have to be right about. We believe this is a great way to invert today’s mania to practice ignorance avoidance as it pertains to allocating capital as common stock investors.

Ignorance avoidance is the number one thing that Munger has historically commented on as it pertains to the success of Berkshire Hathaway over the last 50 years. One item that must not be overlooked is how regulation could creep up on these beloved technology companies. Put another way, what if the individuals and businesses that comprise the income of those various European countries decide they need more power relative to these US and Chinese technology companies? Once again, this reinforces why we’d rather have Germany’s GDP next year. Like the recent movie, The Post, reminded us, there was a war brewing in Vietnam long before people were aware. The same can be said today of the global dominance these technology companies have been allowed.

As the former CEO of WPP, Sir Martin Sorrell, recently said in Cannes:

His comments are analogous to The Washington Post releasing the Pentagon papers in 1971.

We were reminded of this recently by the French Economic Minister Bruno Le Maire. He said, “France took the leadership on taxing Google, Apple, Facebook, Amazon and believe me, we will manage to tax the internet giants by the end of 2018 or at the latest early 2019 because it’s not only a question of justice but also of sovereignty.” We are enticed by his words, because it sounds like someone has crossed the Maginot line and the allies want to stand their ground. This is a war that we don’t want to fight. There is a myriad of industries that can only benefit from what goes on in this discussion. However, there are much fewer that lose and lose hugely, in our opinion.

Of the ten largest companies in the S&P 500 Index, five are technology companies. Global dominance at the risk of regulatory and political risk isn’t our goal as investors. We are not alone in abstaining from these risks. In John Train’s book, The Money Masters, Warren Buffett stated in his criteria for stock selection that he wanted to avoid companies which could be subject to regulation.

History tells us that of the top 10 stocks in the world, eight will disappear over the next decade—if history is any guide Apple might be in the Top 10, but won’t be No. 1. That means it would underperform the market. The rest will fall off the list. So if your investment horizon is 10 years, those top stocks have about a 90% chance each of underperforming. Why would you want that?

We are looking to find great businesses that can be bought today that will benefit many years into the future with few needed assumptions.

We’ll leave readers with this last thought. If Americans in 100 years are taking their children to Disneyland, we have foreseeable economics without having to know much. While the hippies may be right that making love would be a good preoccupation, it’s free. People taking their kids to see Mickey, Minnie and riding the Pirates of the Caribbean (my favorite) is not only profitable for us as investors, but we can also join in on the fun.

The information contained in this missive represents Smead Capital Management's opinions, and should not be construed as personalized or individualized investment advice and are subject to change. Past performance is no guarantee of future results. Cole Smead, CFA, Managing Director and Portfolio Manager, wrote this article. It should not be assumed that investing in any securities mentioned above will or will not be profitable. Portfolio composition is subject to change at any time and references to specific securities, industries and sectors in this letter are not recommendations to purchase or sell any particular security. Current and future portfolio holdings are subject to risk. In preparing this document, SCM has relied upon and assumed, without independent verification, the accuracy and completeness of all information available from public sources. A list of all recommendations made by Smead Capital Management within the past twelve-month period is available upon request.

This Missive and others are available at www.smeadcap.com.

Disclosure: I am/we are long AFL. I wrote this article myself, and it expresses my own opinions. I am not receiving compensation for it. I have no business relationship with any company whose stock is mentioned in this article.