US household budgets are so stretched that relatively small price increases cause a reduction in spending. That already is clear from consumer response to rising oil prices.

If the Trump administration's tariffs on Chinese and other imports turn into noticeable price increases, consumer spending could crumple in a matter of months, and US economic growth could fall to close to zero from an estimated 2.8% to 4% for the second quarter.

Tariff-driven price increases on big-ticket household items - such as the 8% year-on-year jump in the price of washing machines last month - would provoke consumer pushback and lower consumer spending.

The Trump recovery would begin to falter before the end of 2018. Nothing like the 2008 crash is in the offing, to be sure, but a disappointed consumer economy means an angry electorate, and political blowback against the administration's tariff policy.

Let me spell it out in a few charts.

First, the 2.7% annual growth in hourly earnings is now equal to the annual rate of increase in the Consumer Price Index. By this measure, employment growth has brought no real increase in spending power.

Third, consumer debt service as a percentage of disposable income has risen back to the levels we last saw just before the 2008 crash.

Nonetheless, households continue to use their credit cards to pay for consumption. During the past year, we observed a tick-for-tick correspondence between changes in credit card debt outstanding and changes in retail sales. 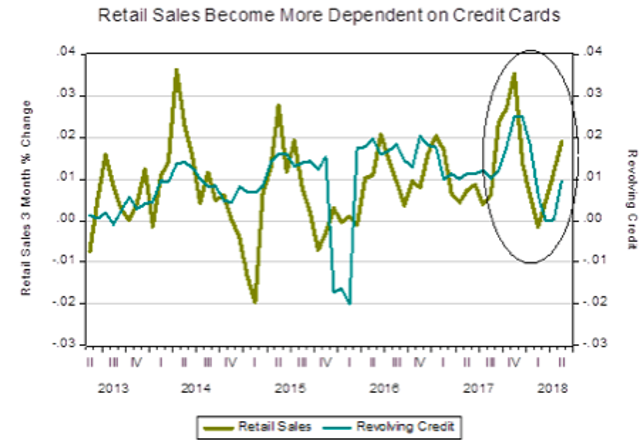 I observed in a June 30 report for Asia Times that household consumption already shows a worrying sensitivity to oil prices. Monthly changes in consumption move inversely with monthly changes in the oil price. In other words, when the cost of a tank of gas goes up, US consumers immediately cut back on purchases of something else. 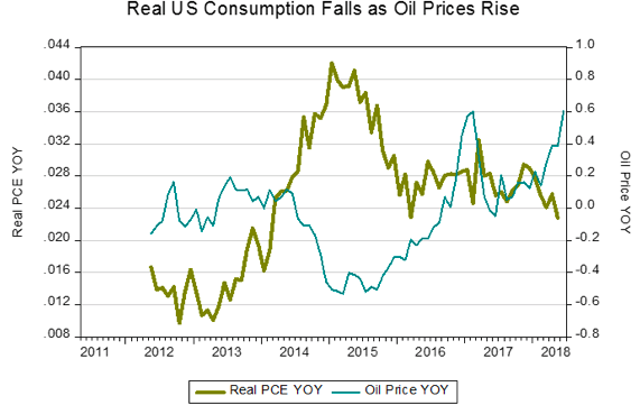 For the past 20 years, falling inflation has been a bifurcated story. The cost of services is up 80% in the past two decades, while the cost of durable goods has been by 20%. That's because the price of smartphones, consumer electronics and household appliances has fallen due to cheap imports from China and other low-cost producers.

Tariffs will raise the price of consumer goods, adding to the already-noticeable impact of oil prices on consumption. China's exports to the US go straight into the US consumption basket. 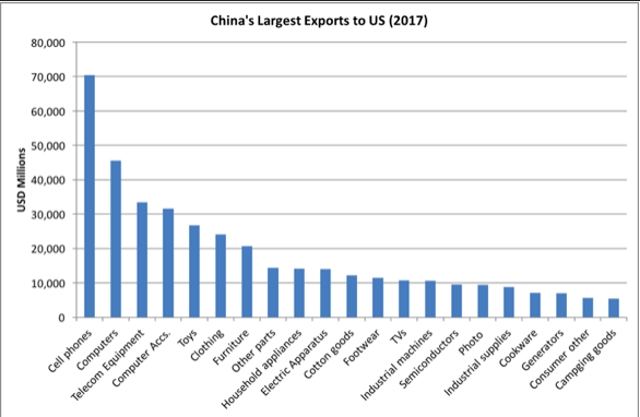 President Trump's political base of middle-class households will feel the pain almost immediately. Americans have come to expect low prices for consumer durables, and they won't like it if they have to pay more at a moment when household budgets are already squeezed by zero real wage growth and rising debt service costs.

A trade war will be painful for both China and the United States. Americans aren't used to this particular kind of economic pain. That makes the United Stats more vulnerable than China.

A trade war is a lose-lose proposition, but the administration should not operate under the illusion that China is more fragile than the United States.

David Goldman
1.34K Followers
David P. Goldman was global head of debt research for Banc of America Securities and earlier global head of credit strategy at Credit Suisse. He was until July 2008 the strategist for a credit hedge fund, Asteri Capital, one of the few credit funds to show a profit between July 2007 and July 2008. He is now Associate Editor of First Things (www.firstthings.com) and a columnist (under the byline "Spengler") for Asia Times Online.
Follow
13 Comments
To ensure this doesn’t happen in the future, please enable Javascript and cookies in your browser.
Is this happening to you frequently? Please report it on our feedback forum.
If you have an ad-blocker enabled you may be blocked from proceeding. Please disable your ad-blocker and refresh.