This year’s increased stock market volatility and sharp declines in the emerging markets are the result of rising interest rates. If interest rates revert to the normal 2007 pre-financial crisis levels, a process not even halfway complete, the potential for significant declines in equity, bond and real estate markets becomes a serious and present risk. This letter will address ways to help preserve your wealth if rising interest rates trigger significant market declines.

Since 1981 interest rates have been steadily declining. Because the majority of the last four decades has been a benign or declining interest rate environment, investors may be unprepared or oblivious to the risks associated with rising interest rates. One common investor misconception is that interest rates are normally priced, when, in fact, they are in an unprecedented bubble. Since the Financial Crisis of 2008, central banks, led by the Federal Reserve, have engaged in unprecedented accommodation including nearly $15 trillion in asset purchases resulting in $9 trillion in negative interest rates bonds globally. Because central banks are now reversing their unprecedented accommodation and markets, in the long term, tend to revert to fair value, investors should prepare for the prospect of a 6% 10-year US Treasury Note yield by 2020, a forecast by bond guru Jeffrey Gundlach that we believe is plausible.

The chart below shows the decline in interest rates since 2007 and their partial retracement. The last two columns show that interest rates are closer to their central bank induced lows than to their pre-crisis highs.

Rising interest rates pose a risk to the stock market that could be significant given its historically high valuation levels. One measure of the market’s current high prices is shown in the chart below which shows that the current inflation adjusted S&P 500 prices are 113% above their normal upward trend. The chart below highlights the stock market’s rarified valuation levels by identifying the generational historic market peaks of 1901, 1929, 1966 and 2000. While the equity market valuations are high, this condition alone historically has not been sufficient to lead to a market decline. Either interest rates must continue to rise or earnings need to contract to prompt a significant equity market decline. If the US economy’s strength continues to exceed expectations, the US equity market could continue to rise for another year or two. 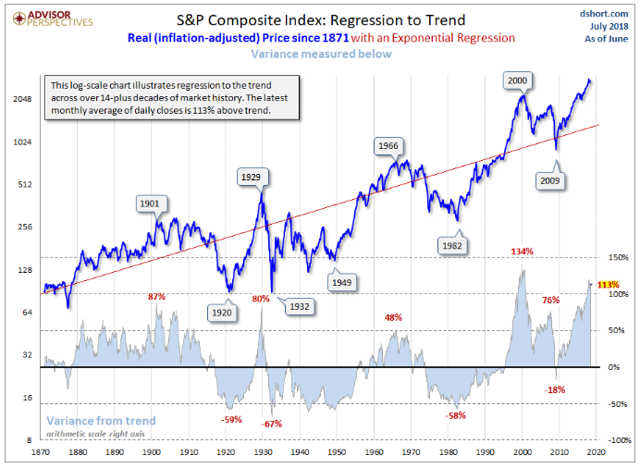 Another historic perspective is from Nobel Laureate Robert Shiller’s Irrational Exuberance website and shown below. The chart below shows the four-decade long decline in the 10-year US Treasury Note’s yield from 14.9% in 1981 to its current 2.84% level. Today’s high equity valuations can be justified by the current artificially low interest rate environment combined with good economic strength and earnings momentum. 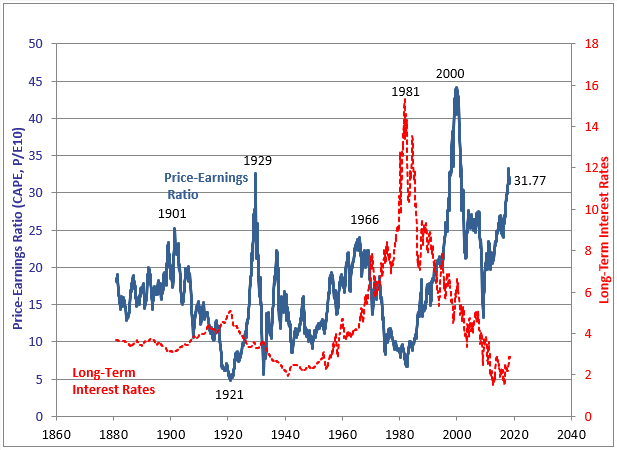 The chart below shows the “Fed Model”, the one widely recognized valuation metric that suggests S&P 500 valuations are reasonable. The Fed Model values the S&P 500 by comparing its earnings yield to the yield of the 10-year US Treasury Note. The red earnings trendline has been rising since 2009 and provides a lucid explanation for the stock market’s ten-year bull market run. If earnings start to decline or rates begin to rise again in earnest, equity market prices will likely break. For the moment, while equities are perilously priced, they do not appear in immediate danger of a major decline. 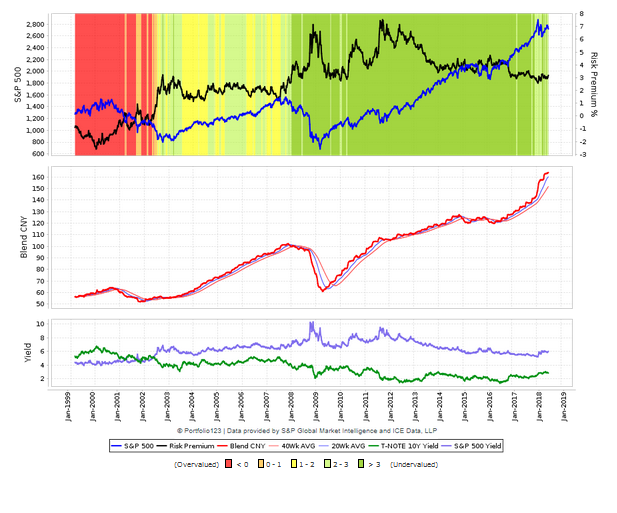 Investors should review their retirement plan holdings where their exposure may be much larger than they realize. Actively traded bond funds could be particularly problematic since they do not hold bonds to maturity to preserve their capital the way a bond holder can. Further, to increase their yields to attract more investors, many bond funds use leverage which increases their potential capital loss risks described in the small print. Peter Lynch once wrote that bond funds are one of Wall Street’s worst innovations. I fully agree, and in today’s environment, Lynch’s comment may be prophetic.

Keeping portfolios to a three-year duration is a good way to reduce bond portfolio risk. To increase income without increasing duration risk, we like Master Limited Partnerships and Senior Bank Loans. Master Limited Partnerships offer high and growing yields which provide a hedge against higher rates. Senior bank loans are the senior credit to all other corporate obligations and they have floating interest rates. Senior bank loans have maturities from one to five years. Depending on the senior bank loan portfolio, duration and risk, yields range from 4-6%.

Investing in out of favor value stocks is one way to minimize capital risk in an equity downturn. Energy is an attractive sector that is out of favor, undervalued and provides a good hedge against inflation. The chart below illustrates that energy is at a cyclical low and is only 6% of the S&P 500 by market capitalization. Reducing exposure from overvalued or popular investments like the FANG stocks and allocating to undervalued and unpopular investments like energy is a smart defensive reallocation. 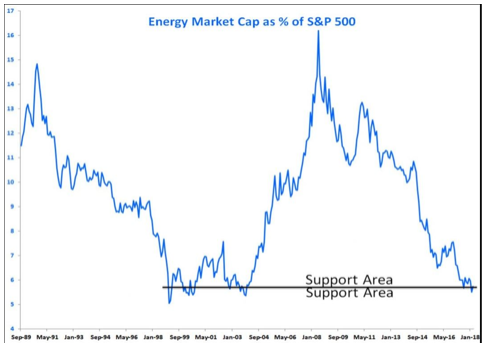 With oil prices rising and US exports of natural gas and oil rising to record levels, select energy securities look attractive. The chart below shows on a relative book value basis, energy stocks are trading at cyclical lows relative to the S&P 500. This level of undervaluation last occurred in 1998 before the energy sector multiple of book value doubled and during the bursting of the tech bubble in 2000-2003, a period when many suffered painful losses. 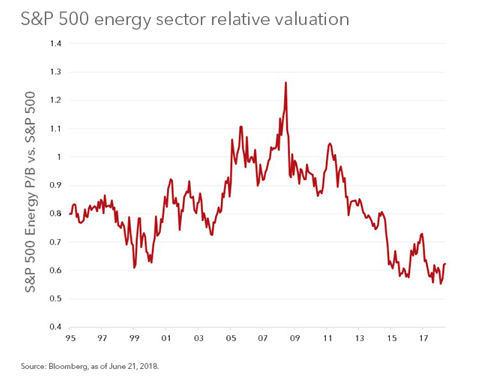 Price momentum, a good predictor of future prices, is returning to energy stocks. This is nicely reflected in the technical chart below by Ari Wald of Oppenheimer suggesting that the energy sector is coming back into favor. 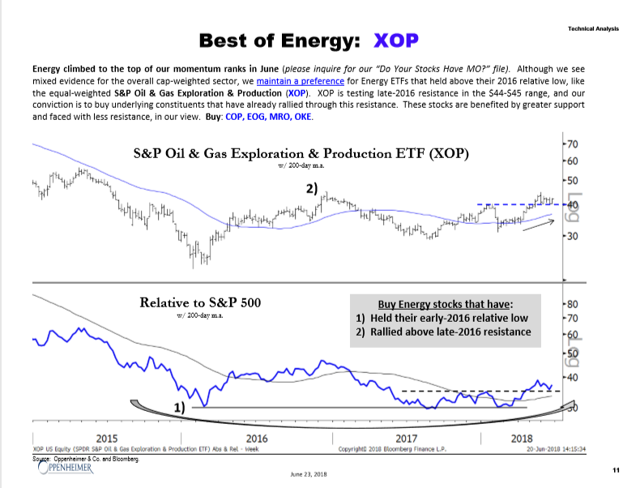 The Case for MLPs:

Master Limited Partnerships have performed poorly for three years but are bottoming out. MLPs have endured an oil bear market, rising interest rates and tax law anxiety which have kept investor interest at bay. With oil and natural gas exports growing, demand for a strong US energy infrastructure is again apparent. With the US equity market’s upward momentum pausing, MLPs have stopped underperforming and prospects for outperformance should soon be realized as MLP mutual funds’ and ETFs’ distributions start rising again. When the combination of MLP’s attractive 8% tax advantaged yield and incipient dividend increases resume at MLP funds, wealth managers will again start allocating money to this unloved sector.

The chart below shows our MLP aggregate SMA returns have dramatically outperformed the S&P 500 from 2000 to 2014. With the collapse in the price of oil in 2014, MLPs underperformed the S&P 500 while the S&P began posting respectable returns following the major market declines of 2000-2003 and 2007-2009. 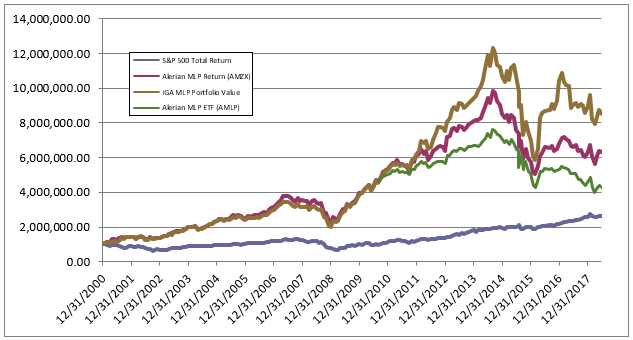 Income Growth Advisors MLP separately managed accounts are poised for a solid second half as our two largest holdings are promising turnaround MLPs whose corporate restructurings are largely complete. Now their ramping cash flows and improving distribution prospects should lead to solid benchmark outperformance. American Midstream Partners, LP (AMID) is completing a huge acquisition in Southcross Energy Partners, LP (SXE), selling non-core assets and leveraging synergistic assets. Likewise, Calumet Specialty Products Partners, LP (CLMT) has disposed non-core assets and paid down $400 million in 11.5% debt financing that its new management team used to restructure its operations. If Calumet can reinstate its distribution in the next year, then CLMT could trade to the high teens, nearly a triple.