The US economy continues to chug along, but what might bring this bull down? Chris Puplava, Chief Investment Officer for Financial Sense Wealth Management, says to watch foreign markets, inflation, and the Fed.

There are two big catalysts that could push equities into correction mode later this year. The coming blackout period for stock buybacks during the Q2 reporting season, which is going to be kicking off this week and next week, could constrain markets, as the end of record corporate buybacks are slated to take some liquidity out of the markets.

Also, the Fed is ramping up its balance sheet reduction to the tune of $30 million a month, then $40 million a month this quarter, and eventually ramping up to $50 million beginning Q4, meaning even more liquidity is slated to be drained from markets.

The US is still strong now, and Puplava isn't calling for an end to the bull market yet, but we also need to note the stress in emerging markets. We may be looking at a "and then there was one, and then there were none," scenario, with the US market being the last to roll over. 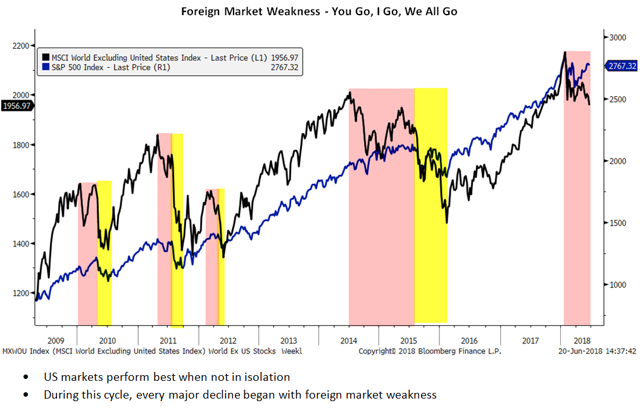 Source: Bloomberg, Financial Sense® Wealth Management. Past performance is no guarantee of future results. All indexes are unmanaged and cannot be invested into directly

Puplava isn't looking for an end to the bull market yet. More often than not, he noted, bear markets occur in the context of a recession with the consumer retrenching, corporate earnings declining, unemployment claims rising, and the economy as a whole taking a step back.

We aren't seeing any of those things right now, Puplava said.

However, looking forward, inflationary pressures are likely to continue, which will lead to further rate increases, higher borrowing costs, and, ultimately an economic slowdown.

"I think inflationary pressures will build into 2019," he said. "It could be the final nail in the coffin that eventually kills the economy and the bull market. We might have a recession in late 2019 at the earliest...with the stock market peaking sometime in 2019."

Financial Sense
3.64K Followers
Cited by Barron's as one of the top financial websites to visit on the weekend, Financial Sense (www.financialsense.com) provides educational resources to the broad public audience through a daily podcast, editorials, current news and resource links on salient financial market issues. Begun in 1985 as a local talk radio program, Financial Sense Newshour (www.financialsense.com/financial-sense-newshour) is a weekly webcast with host Jim Puplava and top financial thinkers. Writing staff of Financial Sense includes: Jim Puplava, Chris Puplava, Ryan Puplava, and Cris Sheridan.
Follow
1 Comment
To ensure this doesn’t happen in the future, please enable Javascript and cookies in your browser.
Is this happening to you frequently? Please report it on our feedback forum.
If you have an ad-blocker enabled you may be blocked from proceeding. Please disable your ad-blocker and refresh.