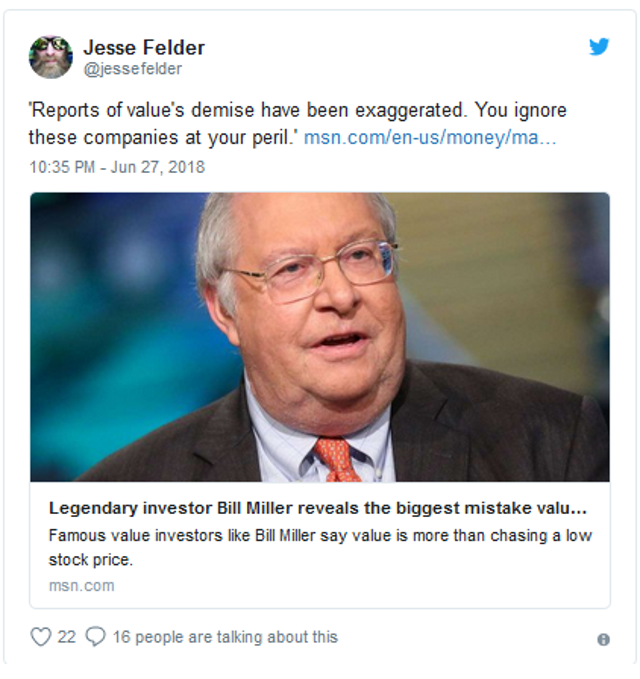 The first problem I have with Miller's thesis is that the foundation of value investing really is in risk management more than anything else. Ben Graham wrote, "Confronted with a challenge to distil the secret of sound investment into three words, we venture the motto, Margin of Safety." It's very difficult to effectively assert that the most popular stocks in the market, at their most expensive valuations in history, offer any sort of "margin of safety" whatsoever. Value investing is about playing defense first and letting the offense take care of itself. Buying these stocks thus requires abandoning a value discipline in favor of something else entirely. 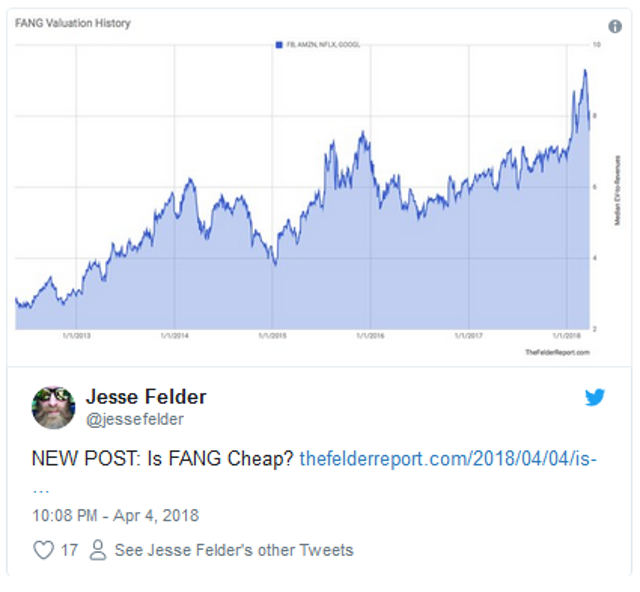 Still, it's not hard to understand why value investors would be tempted to abandon this discipline. It's certainly been a rough go for value in recent years, at least according to the way it's typically measured and reported by the mainstream media. In fact, according to my friend Toby Carlisle, this is the most extreme bear market for value relative to growth in history so the temptation to skew your portfolio away from the former and towards the latter has perhaps never been greater. 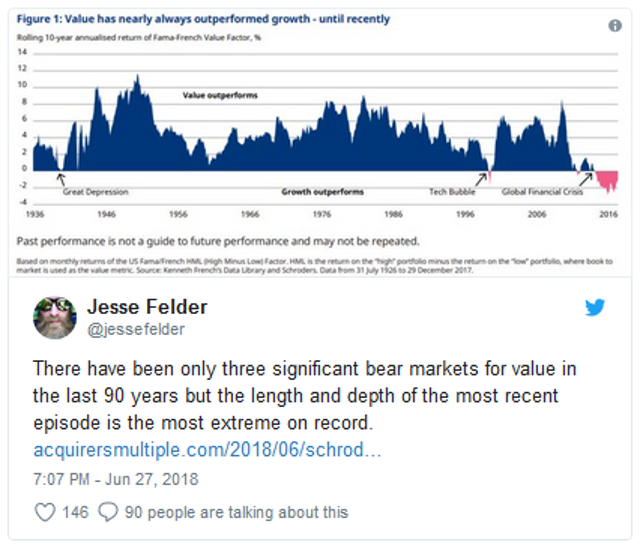 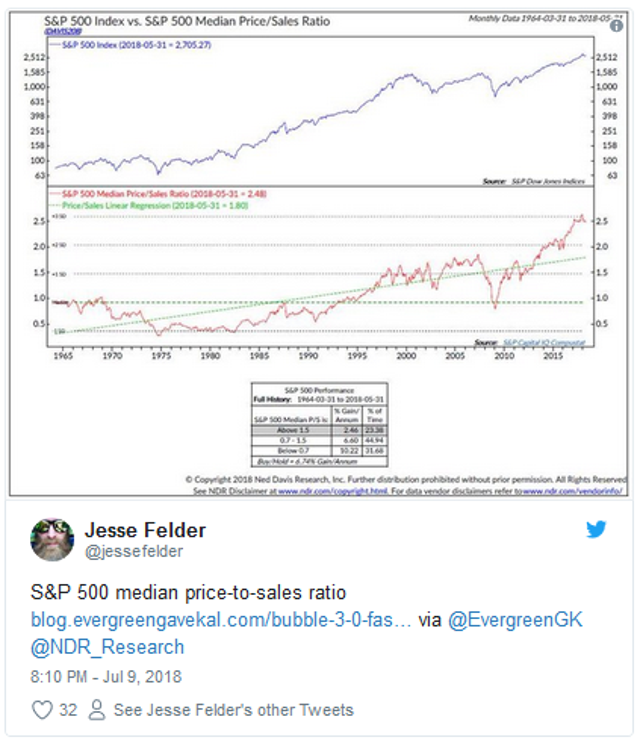 Where value has been tremendously successful is outside the purview of passive investing. The migration of investor funds out of active products and into ETFs has left a pool of potentially attractive investments either underowned or totally ignored by the indexes that nobody is quantifying or tracking in any way. So the real problem here is that "the death of value" being discussed by the media is simply the death of value investments focused on stocks within the major indexes or available to those employing passive products to implement it. 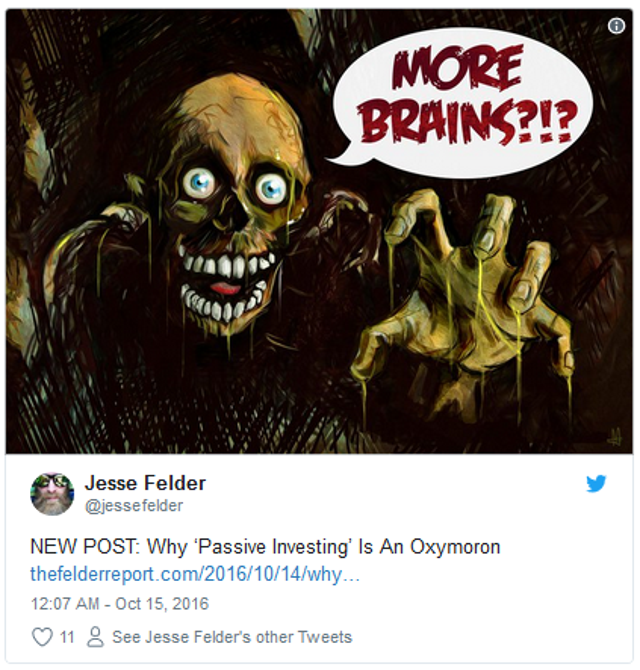 Value outside of this realm is alive and well, at least in my personal experience, and I'll give you several examples: Herbalife (HLF) is a stock that has more than tripled since I called it "my favorite investment idea since Apple" and, according to ETFdb.com, still there are only five ETFs that currently count it as a top 15 holding. Pinnacle Entertainment (PNK) is another one I owned recently. It is up nearly 5-fold since I started writing about it here and still there are zero ETFs that count it among their top 15 holdings. Finally, CF is another that has more than doubled recently and just 13 ETFs have any real exposure to it at all. 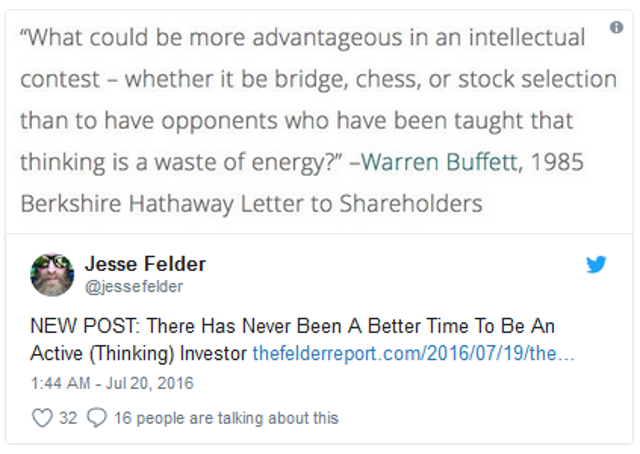 The bottom line is you won't find value in anything that is the focus of the mania itself, including investable value indexes. You will only find real compelling value by focusing on that which lies outside of the passive mania and has therefore been left for dead. And it's this sort true contrarianism rather than feigned that is really at the heart of sincere value investing. And those abandoning a discipline founded in a "margin of safety" today are likely to learn the value of a real value approach once risk makes its inauspicious return.

Jesse Felder
4.11K Followers
Jesse has been managing money for over 20 years. He began his professional career at Bear, Stearns & Co. and later co-founded a multi-billion-dollar hedge fund firm headquartered in Santa Monica, California. Today he lives in Bend, Oregon and publishes The Felder Report.
Follow
4 Comments
To ensure this doesn’t happen in the future, please enable Javascript and cookies in your browser.
Is this happening to you frequently? Please report it on our feedback forum.
If you have an ad-blocker enabled you may be blocked from proceeding. Please disable your ad-blocker and refresh.