China and Indonesia will be the major contributors for the growth of the global oil storage industry, as they are set to add the most planned storage capacity among all countries over the period 2018-2022, according to leading data and analytics company GlobalData.

The company's report 'Global Planned Oil Storage Industry Outlook to 2022' forecasts global planned oil storage capacity to grow from 15.2 million cubic meters (mmcm) in 2018 to 68 mmcm by 2022. Globally, 126 new terminals are expected to commence operations between 2018 and 2022. The US, China, and India are the major countries, with a highest planned oil storage terminal count of 20, 11 and 8 respectively.

China is the global leader with the highest planned oil storage capacity and also second highest among the countries in terms of CapEx spending for the forecast period. The country is expected to spend about $5.5bn during the outlook period. China's new build capacity is expected to increase from 3.1 mmcm in 2018 to 11.7 mmcm by 2022, registering a threefold growth during the outlook period 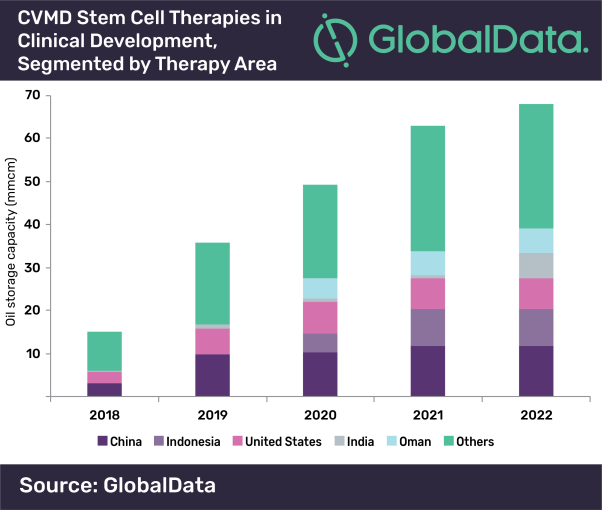 Tejomoortula adds: "As in China, Indonesia too has initiated a strategic petroleum reserves program that aims to store 30 days of crude, leading to the growth of oils industry in the country. Growing demand for petroleum products in Indonesia, especially in the eastern parts, is also driving the growth."

The US will be the top spender in global planned oil storage industry accounting for about 17% of the global capex on upcoming storage terminals. The country will spend an aggregate amount of $6bn on new build refineries over the period 2018-2022. The country's oil storage capacity would reach to 7.2 mmcm by 2022, should all the projects be realized.

HedgeThink
210 Followers
HedgeThink.com is a Hedge Funds Thought Leadership platform that provides a range of premium resources for fund managers and investors, including: Breaking hedge fund news and press releases Interviews with leading fund managers and industry figures The latest compliance developments from around the globe Premium educational resources from hedge fund professionals Industry innovation news and features Hedge fund white papers The latest blog news, views, thoughts and analysis HedgeThink.com is a digital meeting place for fund managers and investors the world over. Our focus is firmly on thought leadership, technology, and where the industry is headed. Encouraging transparency, and fostering dialogue between hedge funds and accredited investors, HedgeThink.com is where anyone with an interest in fund creation and management can find everything they need to research and make the best investment decisions. HedgeThink.com is a new digital source for fund managers and investors at all levels of AUM, offering industry leaders, potential investors, and hedge funds a place to share useful resources, services, education, and research. At HedgeThink.com we are working hard to bring you the latest breaking information, industry news, tools, hedge fund PR, and in-depth analysis of the latest events. Contact us form: hedgethink.com/contact/ Email: info@ztudium.com Twitter: @hedgethink Opinions expressed at HedgeThink are those of the individual authors and do not necessarily represent the opinion of the HedgeThink team, or its management company Ztudium HedgeThink.com has not verified the accuracy or basis-in-fact of any claim or statement made by any independent author: Errors and omissions may occur. Any opinions, news, research, analyses, prices or other information contained on this website by HedgeThink.com, its employees, partners, or contributors are provided as general market commentary, and do not constitute investment advice.
Follow